Omnicom Media Group’s strong performance globally last year is reflected in The Gunn Report for Media 2016, with OMD the most-awarded media agency network for the 11th year in a row and sister network PHD moving up one place to third.

Heineken (which owns DB Breweries, the company behind the award-winning "Brewtroleum" campaign) was the most-awarded advertiser of 2016, moving from sixth place a year earlier and leapfrogging
Coca-Cola and McDonald’s.

They are "creative orchestra conductors" at the intersection of technology and traditional media. The  Gunn Report for Media shows that, while technology and data are fundamental to achieving results, insight, strategy and innovative ideas are essential to delivering them.

2016 was the year of data, mobile-only, apps, programmatic advertising, virtual reality and artificial intelligence. It was also the year of the emoji. The emoticon language that originated from Japan changed digital communications and has become an integral part of how users behave, as Procter & Gamble’s Always cleverly showed in its "Girl emoji" campaign.

And, finally, 2016 was the year of new formats and square and vertical video, thanks to mobile apps such as Snapchat and Instagram. Perhaps the most noteworthy event happened during the 2016 Super Bowl, when Jeep’s "Portraits" spot, shot entirely in a portrait format rather than the traditional landscape orientation, was seen by millions – signalling the beginning of the end for standard video as we know it.

Unlike purely creative ad campaigns, media-related campaigns are still very different from one country to the next.  Not many are Europe-wide and even fewer are international. This is not only due to different behaviours with regard to product or service consumption but also because of different approaches in how media is used and, of course, advertising regulations. 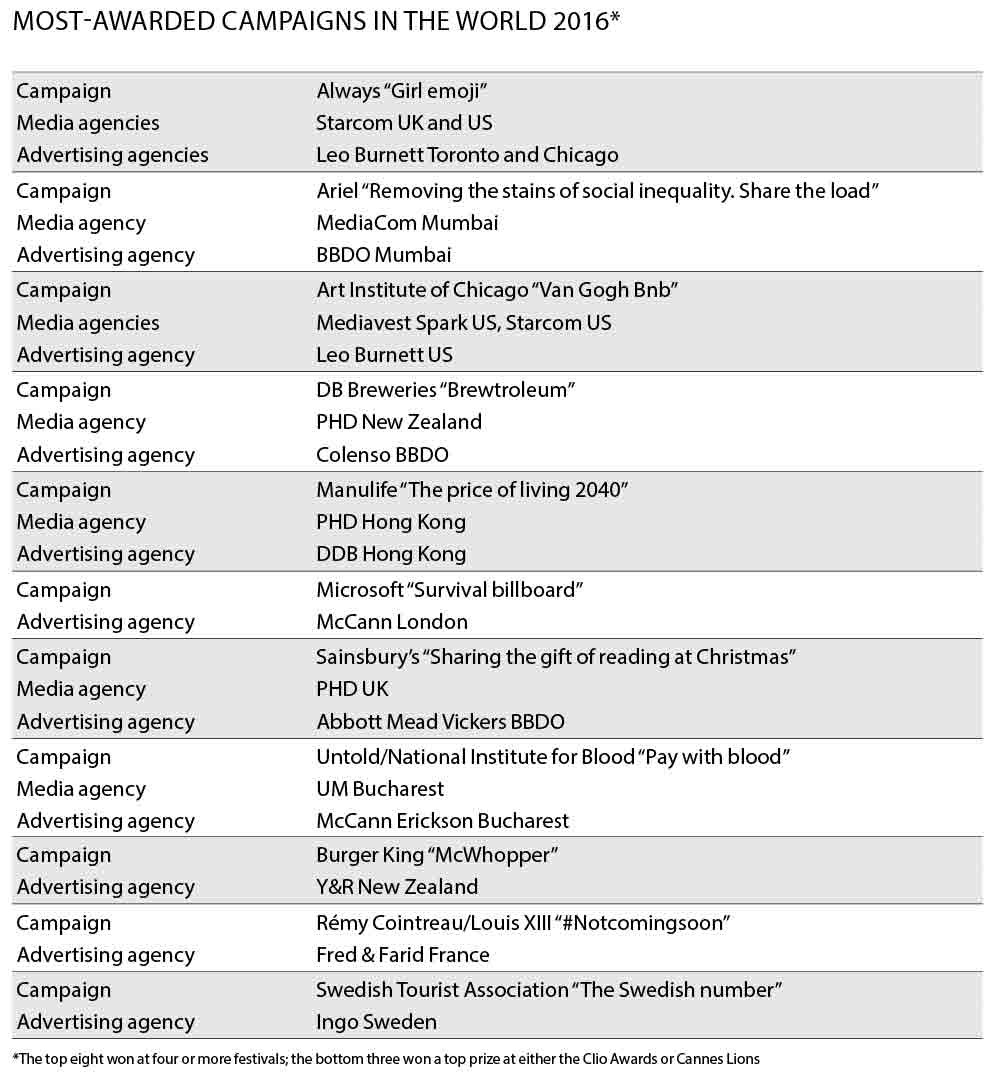 To ensure a balanced representation, The Gunn Report for Media’s rule is to highlight campaigns that obtained a significant number of points in media categories and won awards in four or more regional or global festivals. The eight campaigns that satisfied those criteria all had tangible results and proved that creativity and efficiency go together. We also included three others that won a top prize at a major festival. All these campaigns show how important it is to be bold, act cheekily, engage consumers and deliver a balance between data, technology and creativity.

Read the Gunn Report for creativity