epeat a word often enough, and it will collapse into itself, becoming meaningless. That’s seemingly what has happened to the word ‘innovation’.

So much so, that it moved BT’s group marketing and brand director, Suzi Williams, to call a brainstorming session to establish exactly what marketers mean and aspire to when they talk of being "innovative".

"We had a debate about what innovation is. Is it pioneering? Is it about invention? We stepped away from using those words and labelled our programme ‘Ingenious’, because we wanted to celebrate ingenuity.

As marketers, we have to be a bit careful. It feels so sexy to be ‘dis’-ing, but actually our job is to make customers happy

That isn’t necessarily a man in a shed inventing a radio or someone creating the next Facebook. It could just be someone having a brilliant, new idea."

Williams is even less impressed by the word ‘disruption’. She refuses to use it in meetings and, instead, prefers the expression ‘game-changing’. "Disruption. Despair. Disorientation. Destruction. Discombobulation.

I don’t think customers want ‘dis’ anything," she says. "For me, ‘disruption’ belongs to the agency TBWA, which went round selling disruption as a marketing strategy.

As marketers, we have to be a bit careful. It feels so sexy to be ‘dis’-ing, but actually our job is to make customers happy."

The aim of the Ingenious programme is to create an atmosphere of trust inside BT, where marketers feel empowered to take risks and, inevitably, sometimes fail.

Airbnb, meanwhile, has also sought to create optimum conditions for fast and furious innovation while reinventing the short-term accommodation-rentals market.

The brand’s CMO, Jonathan Mildenhall, says the key to this is an "in-house appetite" to create, which is whetted by being based in San Francisco, a city he describes as "dripping with innovation".

Airbnb regularly has meetings at Google and Facebook, while Pinterest’s office is next door. Consequently, Mildenhall says there’s a "restlessness about the status quo" which was not so apparent when he worked in London; marketing moves more quickly and courageously.

Take the brand’s recent launch of premium magazine Pineapple, produced in-house. "When the team brought this idea to me I went into my corporate mindset, thinking ‘This is a big risk’. But, rather than block it and tell them to do more testing, I gave them six questions to answer in 48 hours," says Mildenhall.

"The problem with big companies, and why they struggle, is they try
to put big, bureaucratic processes around small, innovative ideas when what you need is brutal simplicity. Every company wants to be an Apple, but most don’t have the bravery to follow leadership and gut instinct. Instead they outsource innovation and test to death."

The reality is that marketers in big, established corporations, especially in heavily regulated sectors like finance, will not start running around and ‘breaking things’, in the spirit of the original Facebook mantra ("Move fast and break things"). In fact, as it has grown, even Facebook has modified this strategy – to "Move fast with stable infra".

Corporate structures obstruct the flow of innovation. The problem is, most marketers expect their career to follow a steady upward trajectory, where they receive annual pay rises and regular promotions. Sensibly, to measure progress, companies create KPIs, which are usually short-term.

"These conditions work together to build in systemisation and that tends to mean process and predictability," says Sal Pajwani, global chief client officer at innovation consultancy ?What If!.

If a company is entrenched in this system, how do you build a sustainable counter-culture of innovation? First, don’t try to transform it overnight. "If you do, you will almost inevitably fail," adds Paj-wani. His tip is to "get people excited about what the company is trying to do, so the joy of creating something new is at the forefront of their minds, not the concept of organisational progression".

This is exactly what Philippa Snare, CMO at Microsoft UK, does. She believes that better understanding her team’s motivations is key to fostering innovation, because success depends on energising people: to try new things, to experiment, to fail and be confident in the face of uncertainty.

As Snare says, great innovation often comes out of extreme situations, such as natural disasters, where humans are forced to be resourceful. "But, in very big, capitalist companies, there is very little suffering or extreme necessity, so you need to create an urge," she adds.

"Most people want to feel like they’ve made a difference. So I try to connect them to the impact of their work on others around the world. It could be that they’ve helped a blind person feel less isolated by giving him voice technology, or they’ve revolutionised a business by helping entrepreneurs launch in the UK with Office 365."

Snare argues that it’s about creating a vision  that helps marketers connect with a bigger picture, so they then become the "storytellers" internally, mobilising and motivating others.

Driving the innovation agenda: top marketers have their say

Hover over pictures to see their view

Marketers like Mildenhall believe success is all about recruiting the right type of person to your team in the first place; 90% of his decision to hire is based on whether the recruit has the right "creative, critical and innovative thinking" skills. The challenge is that these types of creative personalities often don’t want a corporate nine-to-five job, especially maverick-minded millennials.

So, brands have to be more imaginative about how they work with external partners. Richard Carpenter, head of marketing – commercial banking and asset finance at Lloyds, is part of a special team set up to look at innovation, to see how it can fit within the bank.

He is under no illusion that creating a culture of innovation will be easy and says progress will happen through "pockets of innovation" and by leaning on external partners to fuel new thinking.

That’s why, for example, Lloyds was keen to support the recent hackathon run by its creative engagement agency Rufus Leonard. The agency’s ambition was to "reinvent money" by bringing its people together with a group of talented millennials, some flown in from as far afield as Brazil, Canada, Australia and the US.

At the beginning of the week, five hybrid groups were briefed and at the end each pitched its ideas to a panel of experts, including Lloyds’ head of marketing communications Jean Reddan – who embraced the fresh thinking, even while her bank was repeatedly knocked by the young talent.

"Things like this are absolutely fantastic in a buzzy agency environment, but in a bigger company it becomes much more difficult," admits Carpenter.

"If we did [a hackathon] like this we would have to get all the right people together at the right time to innovate… that would mean digital, IT, savings, current accounts, marketing. It’s hard to be agile in our world." It’s hard to fail in this world, too, because, as Carpenter notes: "We couldn’t in any way afford to do something that might not be problem stress-tested, which limits innovation."

However, it’s not just traditional sectors such as banking that are finding it hard to move fast enough. Even a big FMCG company like Unilever – renowned for its marketing prowess – concedes it’s struggling.

"People are inventing the future faster than we can adapt, therefore we need to partner in real-time," says its global senior vice-president for marketing, Marc Mathieu. Hence the creation of The Foundry, a platform for Unilever brands to collaborate with start-ups by issuing open briefs to the entrepreneur community.

By doing this, Mathieu hopes to access a shortcut to the "next step of digital", believing it’s an effective way to innovate while also satisfying the KPIs – or, as he puts it: "A way that doesn’t bet the house, while trying to build a new house." Continuing the analogy, he describes The Foundry as providing "a new floor in the house where marketers are more open to experimenting, exploring and playing".

Diageo partners tech companies and entrepreneurs, via its Diageo Technology Ventures programme, to deliver what it calls "breakthrough innovation".

One company thriving in the new world of always-on innovation is Domino’s Pizza. According to Paul Francis, former head of ecommerce at Domino’s and now senior director, digital platforms (EMEA) at Ralph Lauren, the double-digit growth the pizza chain has recorded is down to a "tenacity not to stay still".

That Domino’s is 100% franchised to entrepreneurs, targets primarily young people and isn’t answerable to shareholders all supercharges innovation, he says. These conditions create a culture where marketers have fun with innovation and use it to create not only new initiatives, but also talking points. Examples include the #gamefuel campaign for the launch of ordering via Xbox, the #DominosMeltdown challenge to melt an ice statue of a delivery man and the invention of the "DomiCopter".

Domino’s latest initiative is a crowdfunding project via Indiegogo, with the brand inviting customers to invest in one-touch ordering. As Francis explains: "Rather than going and building the platform, they’re gauging interest in it. It’s validated learning from real customers. Doing it this way, you may fail fast, but you don’t spend your money on things that don’t work. Even if it doesn’t go anywhere, you’re creating buzz around the brand." 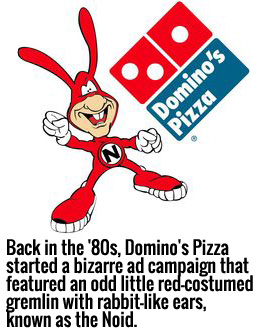 More cautious, conventional brands could take a leaf out of Domino’s book, where having fun with innovation is a serious business. Yet, to foster this creative spirit, companies need, paradoxically, to take innovation, and themselves, less seriously; obsessing about ROI and landing the "big idea" gets in the way.

Chris Baréz-Brown, founder of creative consultancy Upping Your Elvis, goes as far as to argue that innovation needs to be knocked right off its pedestal. He contends that over the past 10 years the marketing industry has tried to turn innovation into a science and, as a result, has become "full of jargon and difficulty and people are scared of it". He doesn’t even tell people that he works in innovation any more; he prefers to use the term "creative leadership".

"Creative leadership is something you can achieve," says Baréz-Brown."It’s about – how do people show up every day and spot opportunities around them that they can influence to make that business better? How do companies give their people the confidence to be able to come up with these ideas and actually make them happen? I’ve seen pretty much every inno-vation process, tool and technique under the sun and they do not guarantee breakthrough ideas. If you don’t create an atmosphere that is liberating, human, fun and energetic – no genius will come."

Trend toolkit book helps marketers equip themselves for the future