Seven per cent of workers are going in full time.

More than half of adland employees are currently not going in to their office at all, a Campaign survey has found.

Of more than 2,000 registered users that responded to the online survey, 53% said they were completely avoiding the office.

One in five respondents (20%) said they were going in occasionally (less than once a week), with an almost identical proportion (20%) going in at least weekly, but not full time.

One in every 14 respondents (7%) said they were going in full time, despite the UK government’s advice since September that people should again work at home if they can, because of a second wave of Covid-19 infections.

The survey was conducted before Boris Johnson brought in tougher restrictions, effective from 5 November, that require people to work from home and force all non-essential retail to shut for four weeks. 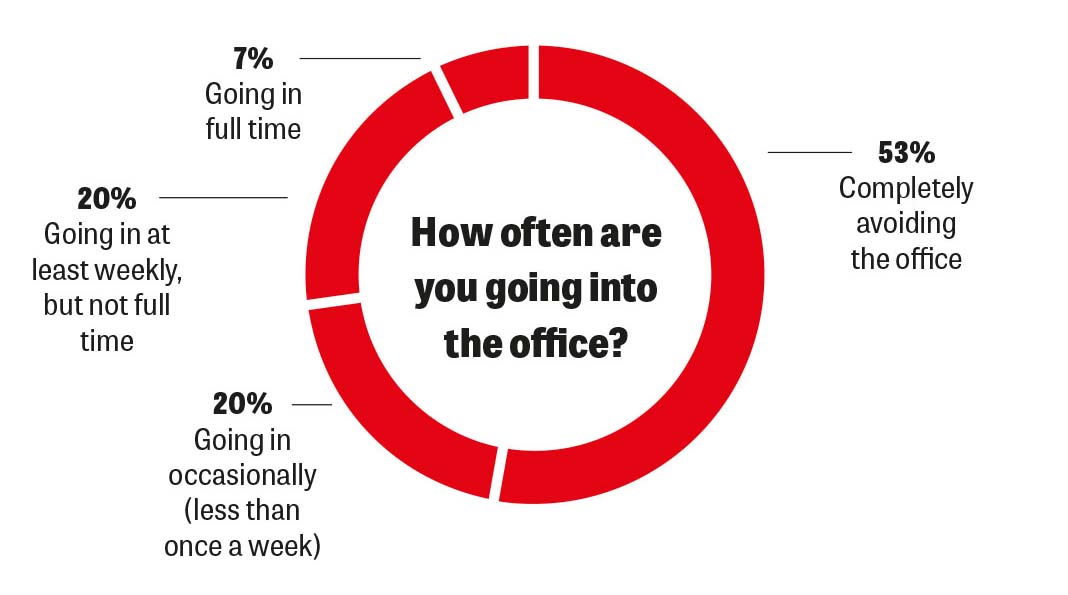 The vast majority of adlanders worked from home during the worst of lockdown between 23 March and June, in line with government advice.

Johnson shifted position in July, encouraging those who were able to return to the office to do so.

The small but significant number going in full time now reflects the challenges that working at home has presented for many people, from a lack of suitable working space to anxiety caused by social isolation.

With little indication of when society may be able to return to “normal”, these figures will underline questions facing struggling businesses about whether they require their current office space.

In the last week, M&C Saatchi said it planned to cut its office space by a quarter, while WPP plans to reduce its space by up to 20%.

Several smaller agencies, including Leagas Delaney, Pablo and Elvis, have given up their offices altogether.

A Campaign survey carried out in May, towards the end of the initial lockdown period, found that only one in eight adlanders wanted to return to the office full time – although half said they would like to go in on certain days each week.

Recognising this preference among their employees, agencies including Ogilvy and Creature have introduced policies such as 3:2 to help staff decide the split between the number of days they spend in the office and work remotely each week.