This week, the IPA invited Extinction Rebellion to address its 44 Club. Here's what needs to happen next.

For those who didn’t hear what they had to say at Cannes, this week our IPA 44 Club gave a platform to prominent members of the Extinction Rebellion movement, including Will Skeaping, ex-creative strategist at McCann London, and Ruth Wright of Abbott Mead Vickers BBDO.

Some welcomed this event with open arms – the fact that it was a sell-out indicates such sentiment – but others may have questioned our invitation to them.

Our answer to the latter is simple: the vehement MO of the 44 Club is to provide people in the ad industry with a thought-provoking programme that broadens horizons, sparks debate, inspires creativity and champions change.

Given the advertising industry has always had the power to change people's behaviours – can, should and/or how can we harness the power to address the climate crisis?

To quote the inimitable Greta Thunberg, referenced by Extinction Rebellion in its presentation: 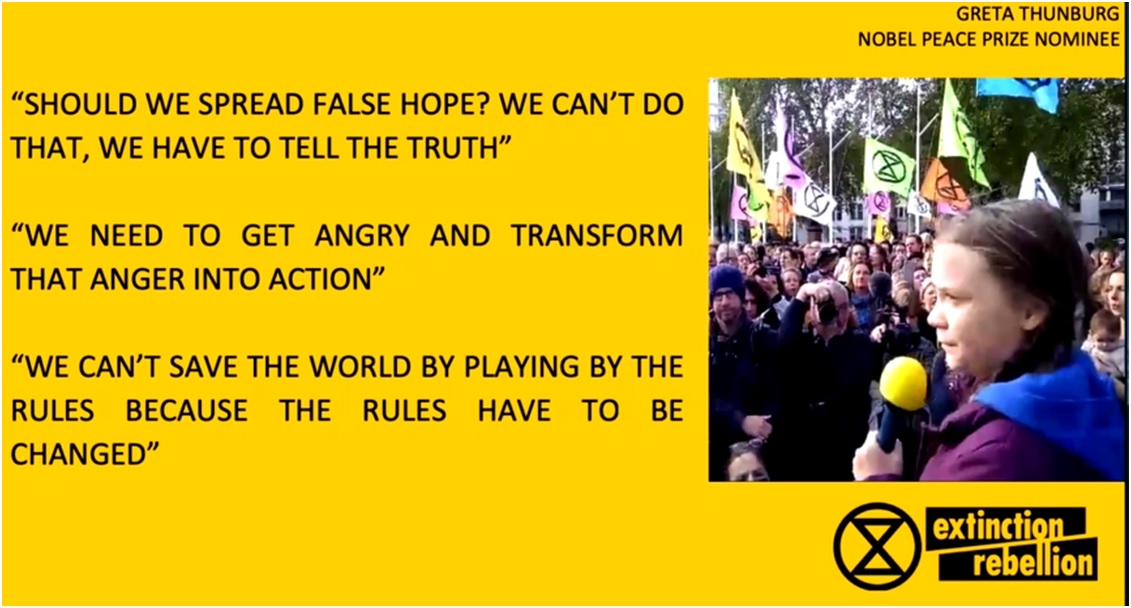 To do this, the first step is of course education.

So what did we learn?

Extinction Rebellion, or XR as it is known, describes itself as academically researched, non-violent, family-friendly, responsible and – crucially – disruptive.

The emergency, its members explain, pivots on two crises: those of climate and of ecology.

To address this, they have three clear demands for which they are lobbying government and the wider world:

What was the audience reaction?

Following the comprehensive, hard-hitting presentation, there was informed debate, emboldened pleas for action and insights into current activity.

On a general level, the overwhelming consensus is that this issue isn’t one we should or can afford to ignore any longer. It requires urgent action. It affects us all: individually, at an agency level – both internally but also in the work we provide for our clients – and, of course, collectively on a global scale.

There is an aching desire from agencies and individuals to do something to address this, but they don’t necessarily know what or where to start.

On a more personal level, we heard some invaluable insights from agency heads who have actively embarked on addressing this issue. Wieden & Kennedy’s executive creative director, Ian Tait, outlined how W&K invited XR into the agency, igniting such an urgency and passion among the agency that 100 members of staff immediately signed up to the internal workshops to start formulating their collective plan of action.

We also heard from Jo Coombes, founder of AdGreen, who has been working with the Advertising Producers Association and IPA Production Policy Group to provide the advertising production industry with the expertise and opportunities to take action on environmental sustainability, including reducing the environmental impact of the production process.

And Havas London chief executive Xavier Rees shared his impassioned plea for agencies to lead by example to their clients. To address this, his agency has invested in becoming B Corp-certified to prove that it puts equal weighting on its people, planet and profit. A significant undertaking. It is also developing a carbon offset production tool that, when ready, it will share with the industry.

So what now? What are we going to do about it?

As XR outlined, it is not looking for favours from the industry. It’s looking for support, collaboration and collective action to address this "sixth mass extinction".

To do this, the ball is in our court.

So, as vocalised in the room, let’s recognise where our strengths lie: we are expert truth tellers and we have the skills of creativity, persuasion, access to media, influence over consumers and open dialogue with senior clients. Let’s motivate clients. Get it on to their boards. That’s when you get real movement.

We have strategists who can boil down the most complex issues – of which climate and ecology crises cover a myriad – and who can distil the core messages into the most consumer-digestible formats.

Essentially, we need to get our heads together, assimilate the learnings from the likes of Havas, W&K and AdGreen, and all the other agencies doing incredible work in this area, to figure out what works, what doesn’t and where our power, influence and privilege can help. And, importantly, what and whether we have to sacrifice anything to achieve this.

To quote one agency attendee: "Let’s get enough agency representatives together on this; this could be the one bit of purpose advertising we all give a shit about."

And so, on that note, the IPA will be liaising with ISBA and the APA on this and we will be setting up an agency working party open to those keen to exact change in this area.

Paul Bainsfair is director-general at the IPA

Taking things forward and getting in touch

My culture: Kim Gehrig on the news