This is the story of a premium lager brand that led the discussion about a rising social issue - and, in doing so, built greater meaning among millennials and ultimately added value to the business.

Known for humorous advertising and major sports sponsorships, the premium lager category isn’t expected to talk about big societal tensions – nor is this necessarily what consumers want. After all, beer is about having fun with friends.

Yet this is the story of a premium lager brand that led the discussion about a rising social issue – and, in doing so, built greater meaning among millennials and ultimately added value to the business.

In the UK, Heineken had enjoyed double-digit growth for the three years leading into 2016. On the surface, things looked good, but in the lager sector the reality was more challenging.

Secondly, beer was undergoing "premiumisation". This was largely driven by health-conscious millennials, adopting a "quality over quantity" mindset. When they drank, they opted for beers with unique stories. The growing craft sector capitalised on this shift, while lagers lost out. 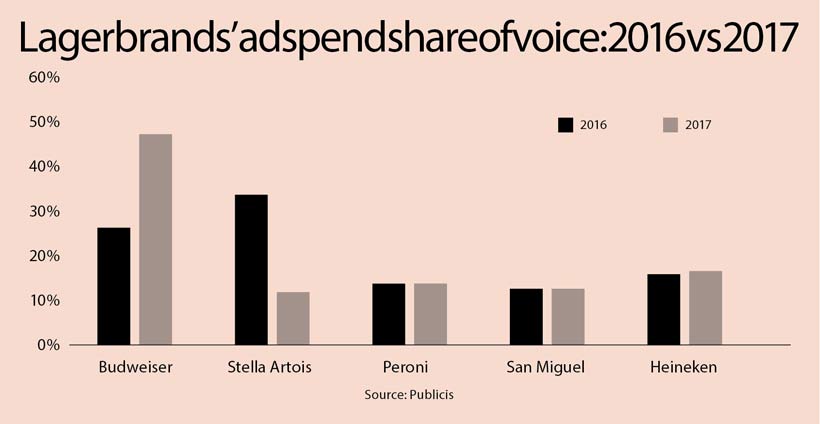 The role for communications

With millennials representing the greatest volume growth opportunity, Heineken set the goal of recruiting a new generation of drinkers. But this was a crowded category, where the average lager-drinker had a nine-brand repertoire.

To get potential drinkers to choose Heineken, analysis showed the brand had to connect with them more meaningfully. But how?

Heineken has long been known for its high-profile sponsorships of properties including the Uefa Champions League, Formula One and James Bond. These are highly effective at positioning the brand as premium and worldly, but in this instance they were not the right properties to help build local meaning and relevance.

As well as this, research showed that our target audience struggled to grasp what our endline, "Open your world", meant. Only 14% believed that Heineken encouraged them to open their world.

This was a challenge – but also an opportunity for communications to plug the gaps, adding greater meaning to the brand.

Crucially, we wouldn’t be manufacturing meaning. "Open your world" was rooted in Heineken’s brand truths. Heineken is the world’s most global beer, served in 192 countries. At the brand’s core is the belief that to progress, you must cross your borders. We just needed our target to understand this.

We were developing this campaign in 2016, when the nation was more divided than ever.

June brought the Brexit referendum, and a 41% surge in hate crime. The gulf between the "haves" and "have nots" had deepened all year.

If ever there was a time to give greater meaning to "Open Your World", it was now.

For many people, the referendum was followed by shock. Yet Brexit was simply a consequence of something deeper.

Our research showed that open conversation had become suppressed. People avoided talking to those with different opinions.

One explanation was the development of individuals’ "echo chambers" on social media. Humans’ natural susceptibility to confirmation bias – our innate tendency to give weight to opinions supporting our own – was exacerbated by their algorithms, prioritising content aligned to our existing beliefs.

This got us thinking.

We may see ourselves as open-minded but, instead of engaging the other side, we stick to our self-confirming bubbles.

The truth is that none of us is as open as we think we are. 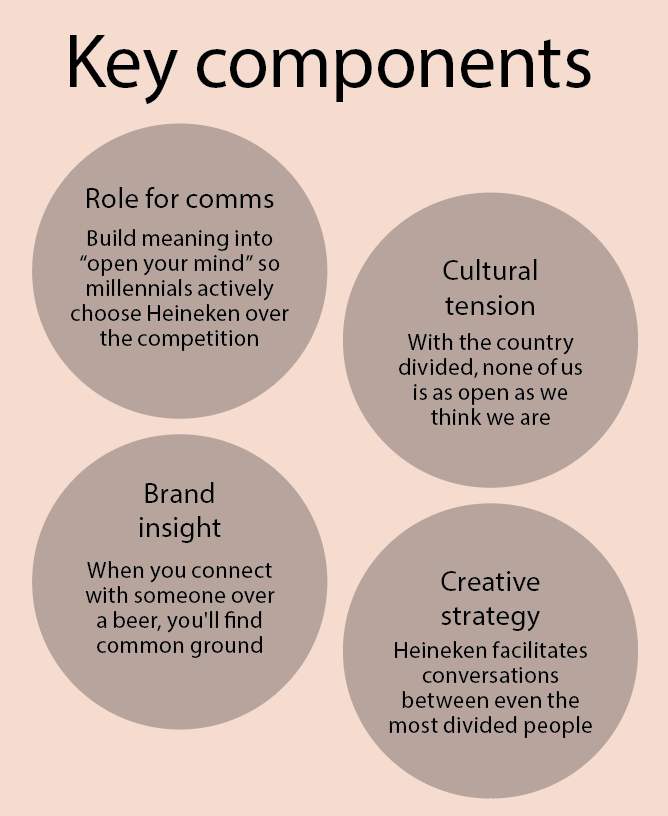 Yet, while echo chambers made it easy to stereotype strangers, this behaviour runs against our nature. As a species, we have evolved to seek out commonalities with the people we meet.

Despite our differences, we will always find something that connects us. And once we’ve found it, we become more open.

Simply sitting down for a conversation is the first step to finding common ground. And what better way than over a beer? It’s a catalyst for conversation; a natural connector. In front of a beer, everyone is a little more open.

The strategy was simple: as a brand that stands for openness, we would facilitate conversation between even the most divided of people.

The creative idea was a social experiment entitled "Worlds apart". We would bring strangers with opposing views together over a Heineken – and film them finding common ground to create our campaign.

Finding the right people for our experiment was a delicate balancing act. We wanted polarising pairings, but there was risk in associating the brand with extreme views. ›

To navigate this, we worked very closely with Heineken’s corporate reputation management team. Together we agreed on a principle of neutrality: we would feature vocal and outspoken people, but we would not pass judgement on whether their views were right or wrong.

With this stance established, we began our search. Our casting agent turned to Facebook groups and other online communities, identifying people with extreme views on an issue. After a three-month casting process, we finally settled on nine pairings, due to be filmed over the course of three days.

Each pair would spend 90 minutes together, gradually finding common ground, before we would reveal their divergent views. 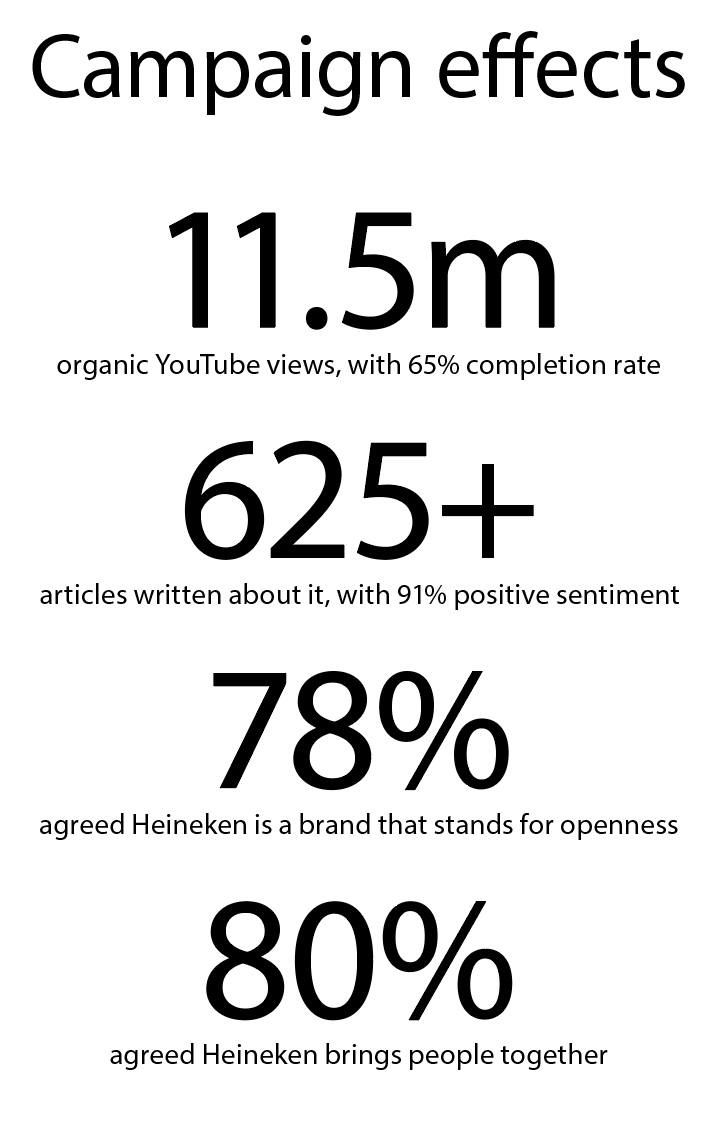 Of the nine pairs we filmed, ultimately we featured three: a trans woman and transphobic man (pictured, below); a hardline feminist and a patriarchal male; and a climate-change denier and a committed environmentalist.

Now we had to turn the hours of rushes into social content.

To tell our story in the most creatively interesting way, we knew we needed a longform "hero" film. But in a world of decreasing attention spans and ever-shorter content, this seemed counterintuitive. So, to give our longform film the best chance of success, we looked back at our previous top-performing videos on Facebook and YouTube to develop a series of mobile-first principles.

We realised we had to eschew the traditional story arc of a TV ad and instead grab attention immediately, almost as a movie trailer does. To achieve this, we captured viewers’ attention up front by opening with our participants’ incompatible beliefs. Next, rather than building to one climax, we realised we needed to create multiple peaks. These came through the choice we offered each participant: stay to discuss your differences over a beer, or leave.

Working with Edelman, we launched our film at an event for journalists and influencers, with the participants, on 19 April 2017. They could also hear from psychologist Dr Chris Brauer, who set our social experiment in context.

The next day, to maximise our media budget, we posted the film on social media, relying on Edelman’s PR strategy to aid organic discovery. Three days in, we turned on paid media across Facebook, YouTube and VoD.

The film soon ignited conversation. The majority was positive, but we had detractors too. This wasn’t limited to alt-right keyboard warriors; liberal-minded people also lambasted us for giving a platform to extreme views.

In a sense, this proved our point. In dismissing our participants, commentators weren’t being as open as they thought they were. We’d sparked a conversation where it was needed most.

True to our principle of neutrality, Heineken didn’t wade in. We just let the conversation play out – watching people with opposing views discuss a common topic. 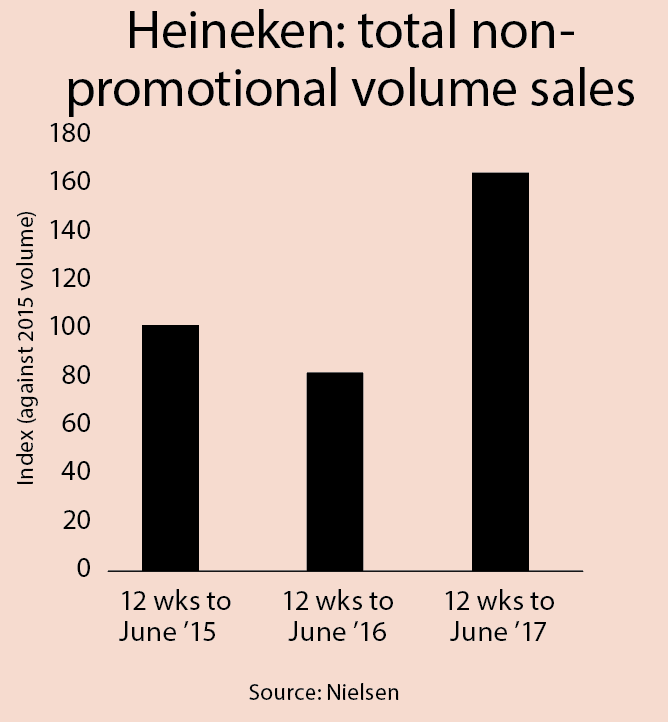 Our objectives were to engage our target audience, deliver our openness message, build meaning into the brand and drive sales. How did we fare?

• The campaign was far-reaching and engaging

The films – hero edit and trailers – were viewed 50.5 million times; 14.8 million views were organic, a testament to their engaging nature.

On YouTube, of the 13.8 million views recorded, just 2.3 million were paid. More than 83% (11.5 million views) were earned. With an average organic completion rate of 65%, the majority who sought out our film stayed to watch all four-and-a-half minutes of it.

• Mainstream media in the UK and beyond covered it

Unprompted, celebrities such as Sarah Silverman joined the conversation.

Then US news networks jumped on board, with our film discussed on CNN, Good Morning America and USA Today, among others.

By now it was clear that the campaign had struck a chord – but what was it communicating about Heineken? 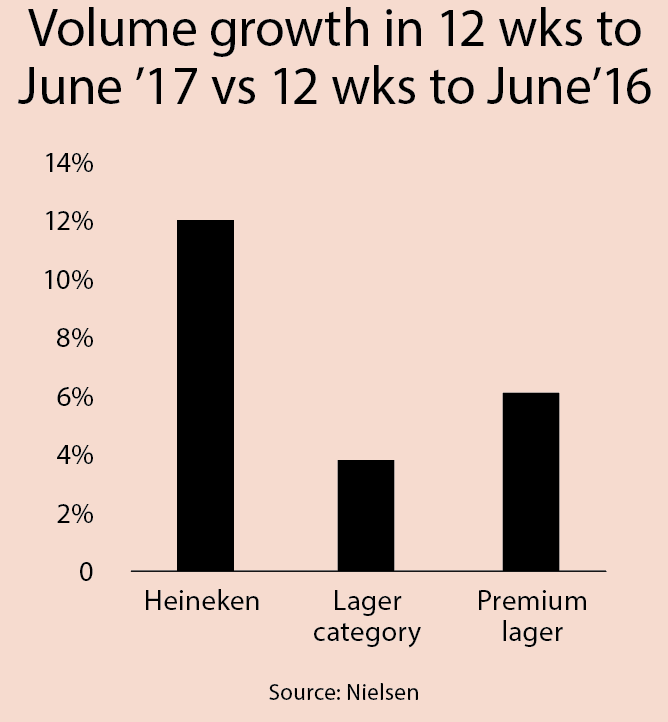 • It delivered the right message

Communication diagnostics showed high message take-out. Of people who recalled seeing the work, 78% agreed that Heineken is a brand that stands for openness, while 80% of them agreed that it brings people together (MetrixLab data).

• It helped to build meaning into ‘Open your world’

Given that this was a relatively short-term campaign for a highly mature brand, we would expect a modest impact. Yet our campaign had an immediate, significant effect on key brand metrics.

In the post-campaign dip, the proportion of people who said Heineken "stands for something meaningful" increased by 26% (MetrixLab data). Measured against a database of 40 Heineken campaigns, "Worlds apart" is in the top box for both brand effectiveness and media efficiency.

• It translated into sales, outstripping the competition

Over the campaign period, off-trade volume sales increased by 11.9% versus the same period the year before. That represents nearly twice the growth in the premium lager category (6%) and more than three times the 3.9% growth of the wider lager category (Nielsen data).

Heineken’s volume sales clearly outperformed the market – but were other factors responsible?

• Promotional activity? Promotions are a significant, always-on element in Heineken’s marketing mix. However, the volume of Heineken that was sold on promotion over the campaign period was lower than the figure for the same period in 2016 and 2015. In fact, non-promotional volume sales were more than twice those across the same period the year before, suggesting that we built not only meaning but also value into Heineken.

• Increased adspend? Year on year, our adspend remained relatively flat, with only a 1% increase in our share of voice.

Cindy Tervoort, head of marketing at Heineken UK, comments: "Our tracking agency ranks the campaign as our most effective to date, while sales data shows a clear uplift during the campaign period, significantly outstripping our competitors."

In a world of decreasing attention spans, longform content feels dangerous. Nonetheless, for a bottom-up digital campaign, it can be your greatest asset. We identified three lessons.

We used our mobile-first principles to bring our social experiment to life in the best possible way across digital format.

Our campaign ignited conversations – good and bad. But we didn’t try to shut down our critics. Ultimately, this lent greater credibility to our message and increased campaign visibility.

We took advantage of the instant feedback digital allows. Seeing the campaign was making waves, Heineken made a quick, bold decision to roll out the asset globally, while the experiment was still new news.

Tervoort concludes: "This was like no campaign Heineken had run before. Not only was there an unprecedented response from media and consumers alike, but the decision to take on a big social issue took the brand into uncharted territory. This was a risk – but one that paid off phenomenally." 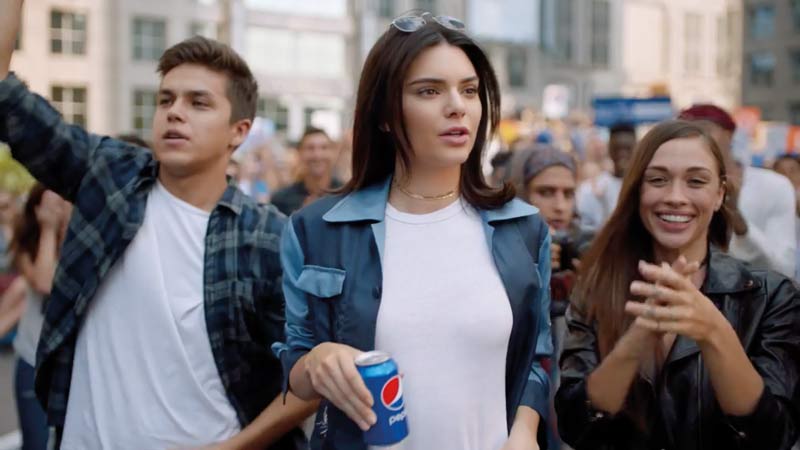 When we were almost ready to go, Pepsi released its Kendall Jenner ad (pictured, above). Here was a brand – and a drinks brand, at that – which had tried to create purposeful advertising and had been excoriated in the press and on social media for the result.

Together we cast a hypercritical eye over our work, looking for where the criticism might stick. But as we re-examined our campaign, we felt confident we could avoid Pepsi’s pitfalls.

Crucially, we were not saying that beer solved all of life’s problems; we were just suggesting that, when you do sit down with someone over a beer, you can open up a little more.

Nor were we claiming to have all the answers; our principle of neutrality meant that we were allowing the audience to come to their own conclusions.

Case study: TfL campaign urges commuters to give up their seats

Case study: Self build at scale in the capital

Case study: Crisis training day for Nationwide at the NEC