What's the worst thing you can say about a brand? That it is hated? That it has been tainted by corruption? That it makes people feel guilty for using it? Or simply, perhaps, that it is just another bland, me-too offer in a chronically oversupplied world?

These aren’t nice problems for a chief marketing officer to wake up to every morning, but neither are they terminal.

Brand hatred? That hasn’t stopped the big four UK banks holding market share since the financial crisis, despite switching being made simpler. Corruption? From the same pool, look no further than HSBC, which shrugged off its drug-money-laundering offences to declare pre-tax profits of $20.6bn in 2012. Consumer guilt issues? Amazon’s tax-avoidance may pit people’s desire against their conscience, but it’s desire that tends to win out.

As for all those me-too mediocrities out there, too many are quietly earning a crust to make this the most damning judgement. Dorothy Perkins, Coffee Republic, Ragu, Best Western, Continental and Yahoo! are just a few that come to mind – though admittedly, given their blandness, not without some effort.

No: the worst thing you can say about a brand is that it has become irrelevant. This is the silent, passionless fate that every marketer should fear. To lose relevance is to be holed below the waterline. You can set your big communications guns blazing and call all corporate hands on deck, but those efforts won’t stop your beautiful brand ship sliding under a sea of indifference.

What saddens most is the realisation that all the love and goodwill the brand has built up over the years abruptly counts for nothing. Kodak is the most poignant example of that. It filled a big happy space in people’s brand consciousness for more than a century, defining a category that was one of the joyful bits of life.

Too bad the category itself went walkabout, when digital imaging became the everyday way to track memories. Kodak filed for Chapter 11 in 2012, and has only recently emerged from insolvency to fight again, a fragment of its earlier size.

To lose relevance is to be holed below the waterline.

Despite this fundamental significance, brand relevance is rarely the first item on a marketing agenda. It tends to be seen as basics, table-stakes, a hygiene factor taken for granted. And surely, if you have a brand to work on, one that customers are still buying, then by definition it must be relevant to their lives.

Perhaps. You have to take a pause, though, when so canny a marketer as Howard Schultz puts relevance at the top of the agenda for Starbucks’ immediate future. Here’s what focused his mind: a 14.6% plunge in US shopper footfall in the last two months of 2013.

For Schultz, this was not merely an anomaly but "a seismic shift in consumer behaviour" – the ecommerce trend gaining pace. That could render Starbucks’ comfy presence in malls and Main Streets a costly irrelevance: there’s not much point in the "third place" if people aren’t leaving their homes in the first place.

Here is a brand that has fought the hot passions of activists, environmentalists and window-smashing haters of capitalism. Yet you get the sense from the rhetoric that Schultz sees those as lower-grade threats than the insidious mutation of consumer habits and behaviours.

In response, he has decided to lead the expansion of the coffee chain’s digital operations, which he sees as "undervalued assets". These include gift cards, reward schemes and electronic and mobile payments, prompting speculation that the brand will take its famous logo "into the payment space".

If a relevance crisis can force the hand of Starbucks to review its business model, there must be plenty of other brands that will soon find themselves facing similar dilemmas – and not just the usual front-line digital victims like retailers and print publishers.

So perhaps those marketing sessions should put relevance right at the head of the agenda. Perhaps it is time to pore over each quarter’s data and search for all the ways in which they point to troubling new consumer behaviours. Perhaps we should all get better at looking beyond our categories, to trends, themes and mores that don’t appear to affect us right now, but one day, suddenly, just might.

Because the worst thing you can say about a marketer is that they didn’t see the writing on the wall.

Even high-profile, global brands must adapt to changing business and cultural conditions to avoid falling out of favour, or even consideration, with consumers. But some take more prompting than others, and vary in how aggressively they tackle the issue.

According to ShopperTrak, the ecommerce trend has led to a severe drop in footfall in US malls, undermining the relevance of Starbucks as a place for shoppers to take a break. The brand is fighting fire with fire, contemplating a move into the "digital wallet" payment space, to leverage its existing digital customer relationships.

Last month, Sebastian James, group chief executive of Dixons, reported the changes that it would be necessary to make to "keep the brand relevant in a digital world". These included the closer integration of contact, delivery and repair functions, and retraining every one of the consumer electronics retail group’s 31,000 employees to radically improve the customer experience.

Microsoft’s faltering relevance in the tech sector is well-documented across the developer blogosphere. There is a growing consensus that the release of the Windows 8 OS, which had a mixed reception, might be to blame and is an example of losing touch with core customer needs. Bill Gates’ return to a product-development role is expected to inspire more customer-intuitive innovation. 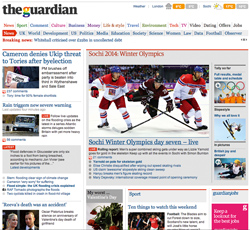 Unfortunately, relevance doesn’t automatically equate to profit. The Guardian was the first national newspaper to fully embrace digital formats, and now boasts 84m unique users a month. Yet it is consistently unprofitable, it and the Observer having combined losses of £31m in the most recent fiscal year. Still, that is an improvement on the previous year’s £44m loss.

Starbucks ordered to pay £1.7bn in dispute with Kraft