Powering your way out of the marketing pack is predicated on looking both upwards and downwards, writes Helen Edwards

Most marketers spend their lives in the middle. They’re never going to find themselves featured in the Power 100 – after all, with more than 30,000 marketers in the UK, that represents a 0.3% elite.

On the other hand, neither will they ever be shown the door for incompetence. They – most – will do OK, make a career, even earn a little respect from the board once in a while. The comfortable middle is not such a bad place to be.

Marketers unhappy with that, those determined to make it into that tiny elite, and to greater things beyond, will need to discover a route that builds on whatever raw ability they might have right now.

One way to do that is to escape from another kind of middle: educational attainment. Standard-issue qualification for marketers in the UK is a good degree from a Russell Group University, often as not in a subject that has nothing to do with business – classics, say, or philosophy and German.

To stand out, and to do the job better, the ambitious marketer needs to improve on this in two directions at once. The first is to raise sights, up to the level of the MBA. The second is look downward and embrace, hands-on, the earthy lessons of day-to-day business reality. Letters after your name and dirt under your fingernails: that is the combination to aim for.

The most impressive people in business always have a wide sweep.

Let’s start with the MBA. It offers precisely what those initials imply: a breadth of illumination across all the disciplines of business. Finance, operations and HR will cease to be misty islands off the coast of the marketing mainland and will be understood as parts of a contiguous commercial landscape with interdependencies you will feel embarrassed not to have grasped before.

The MBA is also a first foot into the newest areas of business innovation and disruption, often learning directly from academic specialists who have helped propel them.

In the US, none of this would be anything special: an MBA is a requirement for a marketing role. This side of the pond, it automatically makes you an exception.

There is a caveat though: it needs to be from one of the top business schools, with the high GMAT (Graduate Management Admission Test) hurdle that implies. This isn’t simple elitism, though there’s a whiff of that about it. Nor is it just to do with who’s teaching you; it’s about what you can learn from the other students. Because they’re the cream too – the most promising people from diverse disciplines and cultures – the insights gained during those huddled, late-night team sessions can be as valuable as anything learned in the lectures themselves.

If middling marketers never put themselves through this rigorous intellectual challenge, neither do they tend to go the other way and learn at the coalface. Consumer understanding, trade relations and the whole messy business of selling stuff tend to be intermediated affairs, dissected in the comfort of the office and viewed through the lens of research debriefs and agency presentations.

The ambitious marketer should sense there is more to be learned by eliminating these buffers. Take a leaf out of Carolyn McCall’s book. The easyJet chief executive makes a point of going up and down the cabin with the bin bag every time she takes one of the airline’s flights.

Or be inspired by Marks & Spencer’s Belinda Earl. Despite the wealth of consumer research to hand, she spent most of her first three months as style director wandering the stores. That convinced her that improving product quality was priority number one.

What she observed was simple, universal and unequivocal: when women picked up a garment they would run the fabric through their fingertips – and, too often, this was the moment when attraction turned to rejection.

The point about these direct experiences is that you never know quite what revelation you will uncover, but you know there will always be one – and that it will not be accessible to anyone who wasn’t part of the moment.

The most impressive people in business always have a surprisingly wide sweep – able to see the big picture and draw strategic themes together, yet somehow acquainted with the layout limitations of the outlet in Llandudno, or pack-copy regulations in Korea.

It isn’t easy to be one of them. It’s much simpler, far less exposing and a good deal more pleasant to stay in the middle. To those who decide to make the jump, though, all power to you.

The Financial Times annual ranking is the one the business schools chase. It is based on a combination of alumni career progression, the school’s record in idea-generation and the diversity of faculty and alumni. 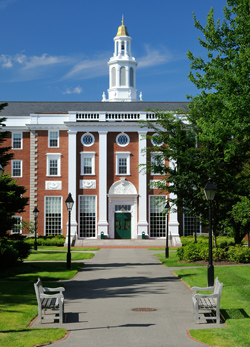 1. Harvard Business School (pictured)
The management consultant’s favourite has held its position from last year, and the alumni love it for its "transformational experience" and
world-class brand.

2. Stanford
The California-based school boasts the highest average alumni salary at $184,566, and a Nobel Prize-winning faculty.

3. London Business School
The only UK school to make the list, LBS attracts global talent in both students and faculty and has one of the highest average GMAT hurdles in the world.

4. Wharton
Founded in 1881, Wharton was the first collegiate business school and has Donald Trump among its alumni.

5. Columbia
The Manhattan school prides itself on being located in the centre of business and boasts strong links to the real business world through its Executives in Residence programme.

6. Insead
Now based in both France and Singapore, Insead has the Blue Ocean strategists Renée Mauborgne and W Chan Kim among its faculty.

7. IESE
Like most of the top schools, Spain’s IESE uses the case method for teaching but, in turn, is also one of the biggest producers of business cases, giving it strong links to current practice.

8. MIT
Home to Grant McCracken, a cultural anthropol­ogist with much to offer the marketing industry.

9. Booth
Part of the University of Chicago, with campuses in Singapore and London, Booth is also ranked second in the world for its open executive-education programmes.

10. Yale
The Connecticut school has been quietly making its way up the rankings in the past few years. It emphasises applicability across all types of organisation.

Why personal development's 'incomplete me' concept must be challenged

Helen Edwards: Differences between urban and rural markets, not countries, are the ones that matter

Helen Edwards: Should you, just because you can?