Should you, just because you can? Not without asking some searching questions first. But there are always exceptions, writes Helen Edwards

Here is a useful marketing adage: "Just because you can, doesn’t mean you should." File it away with those other gobbets of folk wisdom, such as "Too many cooks spoil the broth" (so true, so very true), or "What doesn’t kill you makes you stronger" (let’s hope that one’s right).

Accept that, as with all these things, JBYCDMYS isn’t so much profound insight as an encapsulation of the obvious, one that nevertheless coexists alongside competing aphorisms that capture its very opposite, such as "You should try everything once".

In a world that throws up new possibilities every minute, though, JBYCDMYS can save a marketer’s skin. While others about you are losing their excitable heads extrapolating from "can" to "should", you can be the sane voice in the room mouthing the much simpler "Why?"

Here are just a few examples of when it could come in handy.

You can put a QR code on your in-store display and prepare a special YouTube video for people who scan it.

Should you, though? Does a big, ugly, black-and-white square resembling a half-completed Arabic crossword fit with your carefully designed brand iconography? Have you ever actually seen people in store point their phones at these things? Even if one or two of them did, would the time, effort and cost involved in the creating the video be justified?

You can start a blog. Should you, though? Can you write? Do you have anything original to say?

You can launch an app. Well, doesn’t everyone?

Should you, though? Will it really make your customers’ lives easier? Are you sure? Or will it be like the one for a Swiss airline I downloaded last week, which promised faster check-in, but didn’t work because, as the desk assistant eventually explained, they "hadn’t joined everything up yet"?

You can create a viral campaign with the aim of starting a conversation.

Should you, though? Is "brand conversation" really a better objective than "brand share"? Do you have any hard evidence that the one might lead to the other? Is there not an irony in that word "conversation" when you hide your customer-contact number in six-point type at the bitty end of your website, because you don’t have the funds to invest in your call centre?

You can start a blog.

Should you, though? Can you write? Do you have anything original to say? It’s amazing, but those two questions alone, had they been asked and honestly answered at the outset, would have put a line through 99.98% of all the content out there in the so-called "blogosphere".

You can, as a marketer, as a colleague, as a fully paid-up member of the 21st century, be "always on".

Should you, though? Isn’t there something to be said for light and shade? Don’t you require time "off" to contemplate the issues your market faces in depth, so that your "on" periods can be truly illuminating?

Meanwhile, let’s not forget all those marketing things that you have always been able to do, and still can: base your brand on a Greek-god archetype, put Maslow’s hierarchy in your presentation charts, reduce big decisions to the dimensions of a Boston matrix.

Should you, though? Answers: no, no and no.

And so to the now thing, the big thing, the insistent thing that is on everyone’s lips: the internet of things (IoT). You can gather your team for an out-of-office session to probe ways in which the tentacles of the IoT will reach even your brand, analysing possibilities already written about and working in feverish break-out groups to devise opportunities hitherto unimagined.

Should you, though? I can’t pretend to know for sure – but on this one, something tells me that you probably should.

Flavours of the month

Marketers have a long history of seizing on the latest thing, and doing it with great enthusiasm, just because they can. 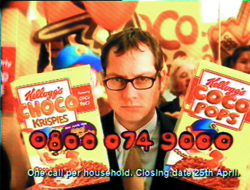 An early adopter was Kellogg, when it changed the name of Coco Pops to Choco Krispies in a 1998 global alignment. The UK brand then decided to ask customers whether they wanted to keep the new name or change it back. The British public, not that bothered about alignment, behaved like human beings and resisted the change, with 92% voting for the original. Kellogg declared itself "delighted" and reverted to Coco Pops.

Since then, internet voting has become a much-used tool in the marketer’s kit-box, often justified by claims of "listening to our customers" or "starting a conversation". Examples range from the genuinely engaging, such as the Walkers Crisps annual flavour vote, to the best forgotten – Andrex "scrunch or fold", anyone?

Richard Thaler and Cass Sunstein’s book Nudge got planners excited in 2008 when it was first published. In 2010, David Cameron launched a "nudge unit". Its biggest success was recruiting 100,000 more people to carry organ donor cards, and it claims to have saved the government more than £300m.

In the late 90s, Unilever decided to base its brands on Greek-god "archetypes". The project was led by an "expert team" and involved two days of classics PhD students educating the brand team on the gods, with the session including, bizarrely, a 30-minute reading from Peter Høeg’s Miss Smilla’s Feeling for Snow, a Danish rites-of-passage novel. The anti­perspirant brand Sure was eventually identified as the sporty, daring Atalanta, and then everyone went back to the day job.

Advances in printing, production and the wonderful flexibility of the digital world has led to a recent personalisation craze: Coke did it on cans, Heinz did it on soups, Nike iD Studio lets us create our own, unique, Nike trainer. The watchpoint would be to make sure you have a strong brand first, at the general level, before getting too involved in this peripheral "particular".