A detailed breakdown of an efficient programmatic spend.

Ebiquity recently warned CMOs that "60% of programmatic spend is wasted" due to ad fraud, viewability issues, and an "ever more complex" supply chain.

This article is not supposed to challenge his claim – if anything 60% might be a slight underestimate because most agencies are marking up the media before it even gets to fees. I just want to point out that a well-run programmatic campaign can and should be much more efficient than this average.

So then, if an advertiser gives an agency £100,000 to spend on programmatic, how much should be converted into media inventory? I know this is like asking how long’s a piece of string, but the industry needs a benchmark.

We’ve taken an example from our own accounts, to show advertisers how a programmatic spend could break down, if managed effectively. 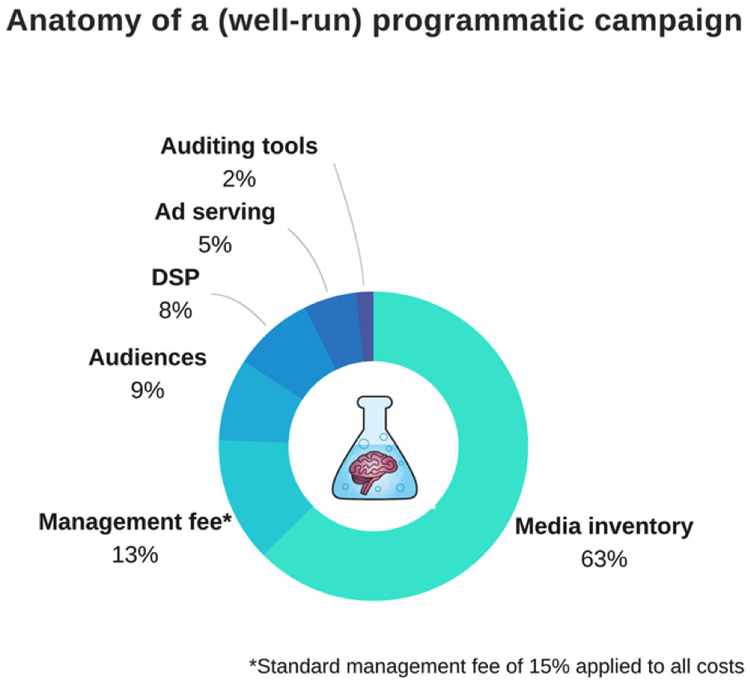 You have to pay a fee to the Demand Side Platform (DSP), the tech which allows an agency to access ad networks and bid on inventory. Different DSPs have different platform fees, and the size of the spend may affect the rate. In this case, using DBM (part of the DoubleClick suite), the fee would be £8,454.

Another chunk of the spend goes towards audience data (£8,620). One of the main benefits of programmatic is that you are able to buy third party data to create an incredible level of relevance, which in turn drives better performance.

A loan provider, for example, might be able to target audiences according to their household type, whether they’re in the market for something like a new car, or certain life triggers like moving house or about to start a family.

How much is spent on audience data varies widely between different campaigns, depending on the objectives of the client and the type of data needed. An agency’s role is to make sure this is cost-effective, and fully visible to the client.

You have to pay to actually serve ads, which is linked to the number of impressions an ad receives. Within this example, £1,947 is spent on the mandatory ad serving fee, then a further £3,505 for the rich media the client has selected – instead of using a basic display medium, they chose to use HTML5 creatives which cost extra.

A third party auditor, Adloox in this case, is used to minimise ad misplacement and ensure accurate measurement. The £1,840 spent has kept ad fraud to just 0.3%, and prevented ads being served on inappropriate sites, essential to the overall efficiency of the spend.

On top of this, of course, there are a number of steps an agency ought to take to ensure brand safety – you can’t rely on just one tool.

And that’s all we think you really need from the buying side. There are a gazillion other intermediaries looking for a piece of the pie but they are generally distracting and another excuse for markups.

What happens next, in terms of how efficiently the media inventory spend reaches the publisher via an SSP, is hopefully something we will all know the answer to soon. Let’s see how the Guardian gets on in its case against Rubicon.

Until then, we hope this sheds light on the majority of the so-called "black box" of programmatic advertising. After all, when done well it’s a beautiful thing – amazing relevance, complete versatility in campaign management, masses of consumer data, low CPM, and much better performance.

Programmatic doesn’t need to be opaque. Media agencies have the power and responsibility to make it transparent, but perhaps too few currently have the incentive.