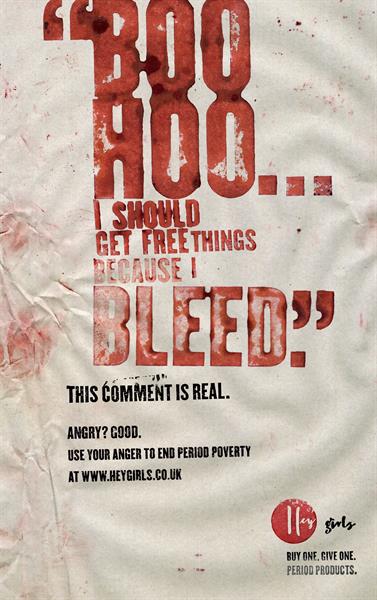 Hey Girls, a social enterprise brand that sells and donates period products, has released a series of striking print ads to highlight the issue of period poverty.

The ads use real and enraging comments about periods and period poverty. "Boo hoo... I should get free things because I bleed", one declares, while another claims that people who experience periods are "pleading poverty" in spite of owning phones. A third real comment on periods says that people should "pay for [their] own tampons if [they] can’t hold it until [they] get to a toilet".

The work was created by Christian Sewell and Andy McAnaey. Media is handled by The7stars.

The print activity comes as part of Hey Girls’ wider campaign designed to induce anger in its audience. It launched last month with what the brand refers to as "the angriest film ever made".

Swyft "Beautiful living" by 20something