Psychologist Daniel Kahneman was the first to bring the notion that we have two distinct parts to our brain - System 1 and System 2 - into the mainstream, writes Jennie Sallows, head of insight at Kinetic.

We at Kinetic prefer to call these parts by their more personable namesakes – Homer and Spock.

Homer (System 1) is all about instinct – easy, quick and, most importantly, unconscious decisions made in less than half a second, doh!

Spock (System 2) concerns the reflective part of our brain and deals with rational, controlled and conscious decisions.

As much as we would like to think we are thoughtful and considered creatures, it is estimated that we actually make around 95% of our daily decisions on the advice of Mr Simpson.

As brands, then, how do we effectively target the Homer part of the brain while out-of-home (OOH)?

The Alfresco Labs, a partnership between Kinetic and #ogilvychange, first used behavioural economics in poster advertising to persuade shoppers to eat lunch early.

This time around we challenged ourselves to go a step further and see if we can nudge people to do something a little more unusual.

Over three days at a Leeds shopping centre we persuaded almost 400 people to eat dry roasted crickets. There was no I’m A Celebrity crown as an incentive and we didn’t have Ant and Dec on hand to charm the consumers but we did have three carefully crafted creatives to nudge them into action.

The project took shape following a conversation with Grub, which provides edible insects to the UK and was the supplier of crickets used for the study. We secured space in Leeds Trinity shopping centre and JCDecaux generously agreed to donate the digital ad sites and space for a stall to hand out the bugs.

Once Grub and JCDecaux were on board we started work on the crux of the experiment – creating poster ads to test various aspects of behavioural economics.

We made a fairly traditional OOH advert with a rational message appealing to the Spock part of the brain.

There was also Grab Your Grubs that worked on a different behavioural nudge, scarcity.

Finally, there was Dear Mum, which worked on normalising. 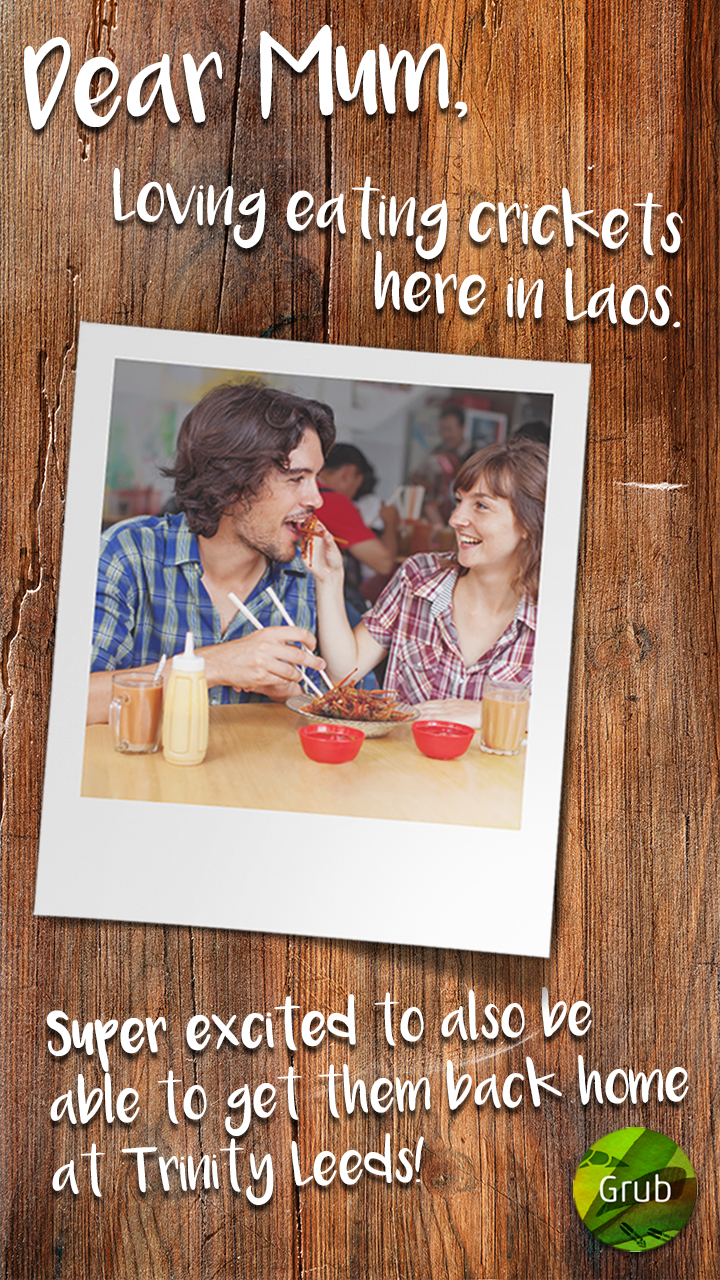 We put each of these up at Leeds Trinity over two hours on three different days and looked at how many people came along to try their free sample of crickets.

The results showed the power of using behavioural economics nudges in advertising.

We attracted 34 people when we had no ads and 67 when we used the ad that simply extolled the functional benefits of eating insects.

But the most successful poster by a long shot was Grab Your Grubs. This brought 154 people, a 126% increase over the effect of the rational ad and four times as many as when there were no ads. The creative played on the Fear of Missing Out (FOMO) phenomenon.

This is a strong behavioural nudge, referred to as scarcity by the behavioural scientists, and one of the reasons the likes of Lidl does so well when it advertises its weekly special offers.

The Dear Mum postcard creative was also effective, with 126 people trialling as a result of it.

We know that when people are on holiday they are more adventurous in their food habits so we leant on this in the creative. Showing people eating the food and using terms like ‘Dear Mum’ and referencing Leeds helped to normalise the idea of ingesting insects.

People feel more comfortable doing something if they know other people have. We are herding creatures that like to feel part of the group.

Marketers instinctively know that ads which incorporate the functional benefits of products don’t perform as well as those that tap into consumers’ emotional and behavioural connections.

If we can move people to do something fairly unpleasant-sounding just by tapping into a sense of exclusivity and normalising the idea, then just imagine what could be possible in an ad for a more appealing product or service. And marketers may want to pay more attention to the out-of-Homers in the future.