A poster for the Eli Roth film 'The Last Exorcist' has been damned by 77 members of the public, after it appeared advertising the film's release in September.

The promotion included an image of a young girl doubled over and bending backwards, her dress covered in blood. Above the girl was a crucifix and text that said "Believe in Him".

Those who complained to the Advertising Standards Authority (ASA) "found the images graphic and disturbing, challenged whether the ads were offensive, distressing and unsuitable for public display", according to the industry body.

Some challenged whether the ads were likely to cause fear and distress to children, especially because some posters were placed near schools, and complained that the ad had appeared in a free magazine that could be picked up by children.

Of the complaints, two found the ad offensive and upsetting because they believed it showed the girl as having suffered a sexual assault.

The distributor of the film Optimum Releasing said the ads were aimed at a "very broad, mass-market audience" and were intended to position the film as a mainstream horror release with imagery within the fictional context of this genre.

It said they did not intend the posters to cause distress and, when they learned about the complaints, instructed its media agency to remove any ads displayed near schools.

It said it expected Unlimited magazine to know what content was appropriate for their audience and believed the material was acceptable for the in-cinema magazine of Cineworld Cinemas.

Cineworld Cinemas defended its decision to print the ad and said it was "suitable for the magazine and film audience at whom it was aimed".

It said the primary objectives of the magazine was to inform customers of the wide range of films available and that the magazine was "not targeted at children" and was unlikely to be of interest to them and, because the ad was on the back cover, would not have been seen unless it was picked up.

It said the front cover of the same issue featured a 15 certificate film – the Sylvester Stallone film 'The Expendables', which was the same certificate as 'The Last Exorcism', and they believed that this would have guided adults accompanying children to the nature of the magazine.

The distributor contended that the large title treatment that featured the word "exorcism" and the position of the girl, in relation to a crucifix, clearly showed that any contortions showed the effects of demonic possession, and "not sexual assault".

The ASA said "the ads were designed to promote a mainstream horror film, but considered that and ad which showed a young girl with her dress covered in blood, was likely to cause offence and distress when displayed in an untargeted medium such as a poster.

It also considered that the image of a young girl with her dress covered in blood was unsuitable to be seen by children.

However, it considered that the same image in Unlimited magazine, which was a specialist magazine available in Cineworld cinemas, was unlikely to cause serious or widespread offence or distress in the context it was in.

It also considered that because young children visiting the cinema were likely to be accompanied by an adult, they were unlikely to see and be distressed by the ad in that context.

It also considered that the contortions of the girl in ad were explained by the title of the film and the image of a crucifix, and were therefore unlikely to be widely interpreted as a result of a sexual assault.

The poster ads were ordered not to appear again in their current form, but there would be no further action on other complaints. 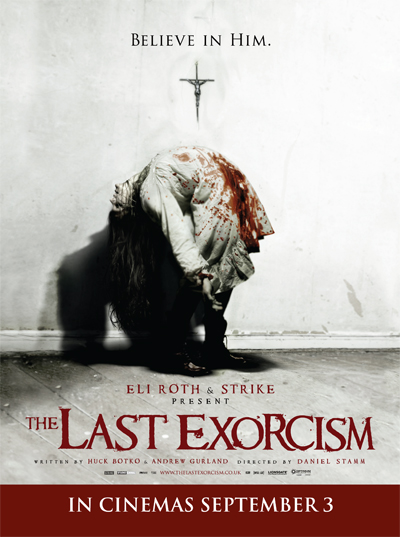