The Internet Advertising Bureau UK has accused hundreds of advertisers of being "clickheads" as part of a rallying cry for brands to adopt better measurement standards for online advertising.

The digital ad industry trade body has sent an open letter to more than 100 brands – including BMW, Diageo, Ford, John Lewis, Mondelez International, Netflix, Procter & Gamble, Sky and Unilever – in which it calls time on the industry’s reliance on "vanity metrics" such as click-through rates to measure the effectiveness of online media.

The IAB is also proclaiming 12 February as National Anti-Click-Through Rate Day as it launches its Measurement Toolkit for best practice on measuring digital ads. 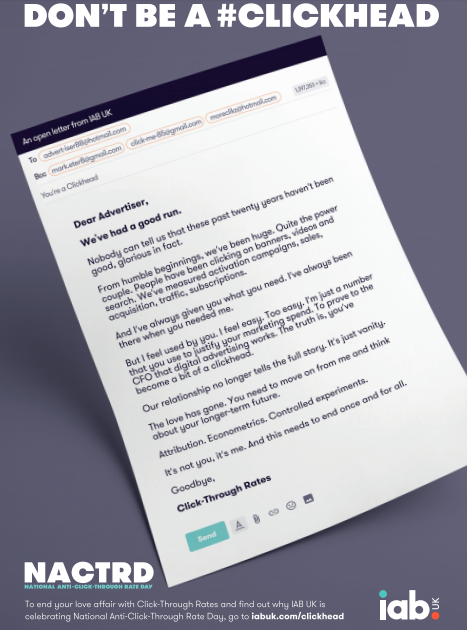 The letter, published in this month’s issue of Campaign, is entitled "You’re a clickhead" and is written on behalf of Click-Through Rates as a character that wants to ends its relationship with the ad industry.

The IAB is using the campaign to criticise CTRs – the ratio of internet users that click on an ad’s link to the number of total users who view the ad – as a short-term metric that fails to tell the full story of how well an ad performs.

The IAB has also made a video to promote its campaign in it has "infiltrated" UK media agencies to delete CTRs from client reports.

The CTR metric has been criticised for years. In 2014, Mel Exon, Bartle Bogle Hegarty London’s then chief digital officer, described CTRs as "simply undead" because it still showed up on media reports "in the absence of anything else deemed useful".

Jack Swayne, chief executive of performance marketing agency iProspect, told Campaign there is "no one-size-fits-all solution" to measuring the success of an online campaign.

He said: "For example, when driving conversions, we shy away from looking only at search click-through rates, but instead focus on conversion rates, specifically algorithmic, data-driven attribution numbers for ad copy or a keyword.

"The reason being, while a keyword may drive a click or even a click before a conversion, most of the time it’s the wrong KPI – a click is not a true impact. Instead, we use the smartest tools we have to actually understand post-click drivers, hence using attribution algorithms to help us guide investment.

"Where this might be less relevant is driving long-term brand awareness as we know it can be difficult to tie a click or engagement with a brand ‘ah-ha’ moment. In this case, it’s useful to rely on fundamentals, such as impression quality (eg IAS or Moat quality score numbers) and ensure that the content is aligned to the right audience at all stages of the customer’s journey."

The IAB says its Measurement Toolkit sets out the main models and techniques that can be used to measure digital advertising, from big-picture approaches including econometrics to granular analyses such as attribution modelling.

Commenting on the launch of National Anti-Click-Through Rate Day, IAB UK chief marketing officer James Chandler said: "Advertisers increasingly rely on click-through rates to justify their marketing spend to the chief financial officer, but it’s not a reliable metric for effectiveness and only tells half the story."

How to raise your brand's voice