Iceland "denigrated" the Food Safety Authority of Ireland in an ad defending the amount of horsemeat found its burgers but the ad itself was not "misleading", according to the ad watchdog.

The Advertising Standards Authority upheld in part a complaint that an Iceland print ad stating that horsemeat had never been found in their products (see below) was misleading and denigrated the Food Safety Authority of Ireland.

The ad, released in February 2013, stated: "No horsemeat has ever been found in an Iceland product." This was followed by explanatory text stating that equine DNA was found at a level of 0.1 per cent in two Iceland burgers.

The explanatory text continued: "The testing method used by the FSAI was not an accredited test."

The complaint argued that the two statements were contradictory, and that the ad denigrated the Food Safety Authority of Ireland.

Iceland countered that, following the FSAI report, the UK Food Standards Agency had agreed with retailers that a threshold level of 1 per cent would be applied as a distinction between gross adulteration and trace levels of DNA, which may have been the result of minor cross-contamination.

In its response Iceland also argued the ad made a distinction between horse "meat" and horse "DNA" to convey this distinction.

On this point, the ASA concluded that it believed the consumer would understand the distinction Iceland wished to convey, and therefore did not find that the ad was misleading.

However, the ASA did uphold the point that the ad denigrated the FSAI.

The ad omitted reference to a second set of tests the FSAI conducted using an accredited methodology and did not make it clear that their test methodology was widely used in North America.

The ad also emphasised two accredited laboratories carried out Iceland’s own tests while omitting that the same was true in relation to the tests the FSAI carried out.

The ASA concluded that the ad created the overall impression that the FSAI’s findings were questionable, which the ASA did not find to be the case.

The ASA ruled the ad must not appear again in its current form and told Iceland to ensure that their advertising does not discredit or denigrate organisations in future.

This article was first published on campaignlive.co.uk 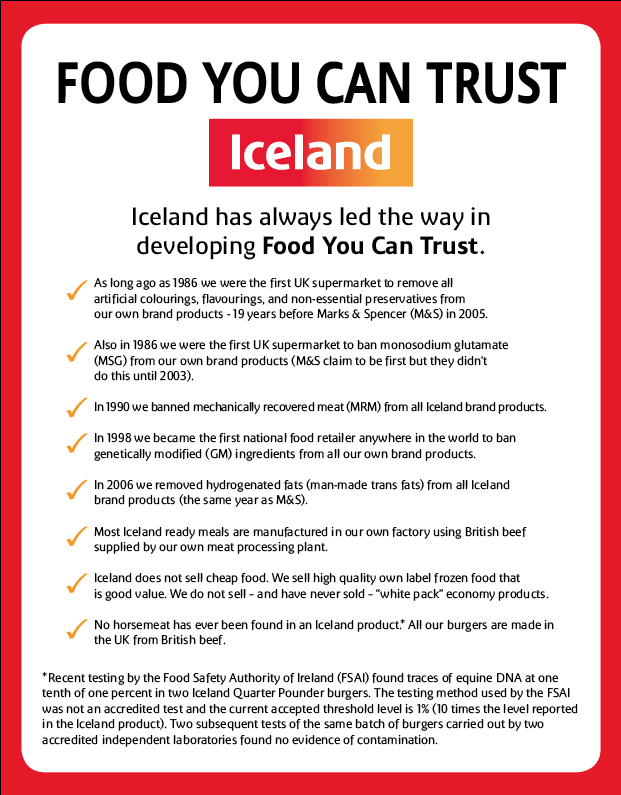 Iceland back on TV with Michael Bublé romance