Out-of-home ads that carry inclusive messaging have a greater impact than their purely on-brand, old-school counterparts, normalising D&I and boosting the bottom line, according to research from Kinetic.

The OOH specialist worked with media owner Global and outdoor operators Clear Channel and JC Decaux to conduct a study that compared traditional-style creatives with ads that were more inclusive and representative in style.

The test, which was conducted among 2,613 people, also compared the impact of similar executions run on outdoor media with those on online social media.

Kinetic conducted the research across two categories — FMCG and automotive, with ads for Trident chewing gum and Buick cars respectively. The brands are largely unknown to the British public, a deliberate move to avoid respondents having biases or preconceptions about them.

The study showed that inclusive OOH ads generated a 21% rise in purchase intent for 18- to 34-year-olds, regardless of whether the individual consumer was directly represented in the ads. 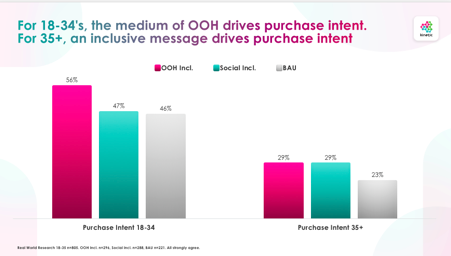 Interestingly, comparing OOH with social media showed little difference in reaction to the differing styles, which Kinetic interpreted as a testament to the public context of outdoor media.

When 18- to 34-year-olds viewed an inclusive ad on an OOH site, about one-third agreed the brand advertised was inclusive, authentic, high-quality, trustworthy, had longevity, was market-leading and distinctive. When the same ad was displayed on social, a quarter felt the same way. 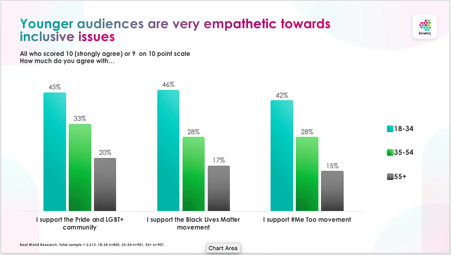 Kinetic also found that D&I-themed OOH in city centres had a more pronounced impact on respondents, with 40% saying they supported inclusivity issues. Almost half of 18- to 34-year-olds said they supported movements such as Pride and the LGBT+ community (45%), Black Lives Matter (46%), and MeToo (42%) – even if they were not personally represented by those groups or movements. On the other hand, older consumers (35-to 54-year-olds) were, perhaps not surprisingly, more conservative in their outlook.

Jennie Roper, Kinetic's head of insight, said: "Brands should get some attitude and not just plan on physical demographics. It's how you feel on the inside as well as how you look on the outside, which means brands need to understand and plan around how a person identifies emotionally as well...

"Inclusive marketing isn't just the right thing to do, it also drives purchasing intent and unlocks the spending power of, currently, largely ignored audiences in advertising. OOH and its public nature is the perfect medium for brands to speak out, and for society, it can play a key role in normalising inclusive attitudes in the real world."

Kinetic added that its Journeys platform can "marry the perfect blend of attitude and demographics, fusing behavioural and attitudinal data sources to develop a detailed picture of audience activity for people of all ages, religions and ethnicities".

The executions were all designed by Kinetic's in-house design team in consultation with DECA Diversity Media Consultancy.

Your media plan is missing a vital component

The year ahead for media: an opportunity to grow

Things that make me go OOH