MKTG: Why have you decided to take on the title sponsorship of Red Bull Racing?

Andreas Sigl (below, right): For some people it has come as a surprise, but to us it is not. We've almost worked our way up to it from the very beginning, with both the technical and the title parts of the partnership on our wish-list.

Like any partnership, you have to earn your credibility and trust on both sides, and we had to do our own work with internal stakeholders. [Team principal] Christian Horner needed to talk to the Red Bull side, but it all worked out, and for Sebastian Vettel to then also clinch the title made it even better. 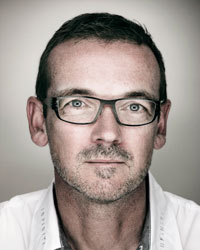 Has the success of the past two years encouraged you to expand your partnership?

If you look at how we started out, we had good feedback internally and externally in terms of getting into F1. It has brought us a lot of success in media exposure, but also internally. Our regional markets and dealers have voted with their money by activating the partnership.

We also realised that, yes, the name awareness of Infiniti is starting to register, but we want to make sure people don't think we are a bank or insurance company, and that people know we make performance cars. So we want to dial this up.

Rather than just sticking a bigger logo on the car, we need to bring some authentic technical contribution that the team appreciates and needs.

Does this mean that we are getting closer to an Infiniti Red Bull Racing road car?

Yes, it’' definitely on the list, and there's interest from both sides. We cut our teeth with the Sebastian Vettel FX special edition model, which has been a great project, so we could do more like that. Also in terms of the timescales, we are signed for four more years, which is a little closer to our automotive industry timeframes. In terms of brand-building, it takes five, 10, 20 years to build a brand, so it is better that we are signed for the long term.

Does the title sponsorship protect Infiniti from the risk of a driver like Vettel leaving the team?

On the driver side, I think the Vettel-Ferrari rumours have been put to bed. I talked to Sebastian at the Brazil Grand Prix, and he is contractually and emotionally attached to Red Bull.

For us, of course, he is our brand ambassador and we like working with him, and hopefully vice versa, but there is also an entire team. We have Vettel test driving in Japan, but we also had a show-run with Infiniti Chile with David Coulthard, and if we're in Australia, our colleagues there want to see Mark Webber. It's good to have all of them involved.

Is it a worry that, in the joint-branding with Red Bull, Infiniti may not enough cut-through?

There have always been sensitivities about Red Bull being too dominant, or not accepting of other brands, but we’ve learned that we get along and – even if we wanted to – we couldn't throw Red Bull out.

There is brand equity rubbing off in both directions. We also want to do this in a tasteful and integrated way, not just slapping big logos on everything. I lot of people thought it unlikely, but for both brands it would be a good move.

With the increased brand visibility, will you change the way you promote the relationship next year?

A lot of what we've done is good, and we should do more, but we also need to move into new areas. On the technical side, we want to bring technology to the track, but we also want to get the credit for it.

Some of that will have to change, in terms of our activation and storytelling. At show-runs, it will be the Infiniti Red Bull Racing team coming to town, so we need to see what we can do differently. Going to a new level, we can do better things with the team and with Infiniti teams across the world.

Sky in search for F1 sponsor to replace Santander