The world’s largest musical event is known for polarising the audience: you either love it or hate it. But regardless of one’s personal opinion, it’s impossible to deny that Eurovision is a show infused with a cultural relevance like no other, able to captivate millions of viewers with its enthusiastic nature, extravagant production and utterly bizarre flavour.

In 2020, the show was cancelled due to the coronavirus pandemic, so when the time came to get back on stage in 2021, it erupted like never before. With a 200 million-plus audience, Eurovision 2021 was the largest in-person entertainment event in Europe since the start of the pandemic. Italy’s win was a deeply emotional one, capturing the overarching feeling of hope and celebration that a new start signifies.

But before the event could take place, those of us in the Netherlands were there not only for the privilege of hosting it, but to amplify the Eurovision experience and make its music heard everywhere. Inspired by the new logo designed by Clever Franke, MediaMonks partnered Eurovision and official technical supplier NEP, including its label Creative Animal, to give Eurovision a much-needed boost after a tough 2020 – with a dynamic brand that reflected the wide-ranging cultural identities the contest showcases and a refreshed motion GFX system. Here’s how it came together.

When working with live events of this calibre, it’s important to start by thinking beyond the usual set of touchpoints. Along with the most basic deliverables any branding campaign would demand, you may find yourself working on bumpers, title cards, wipes, split-screens, scoreboards and other motion graphics. Therefore, having a versatile design system in place will guarantee that the onscreen and digital experiences are tied together with consistency. 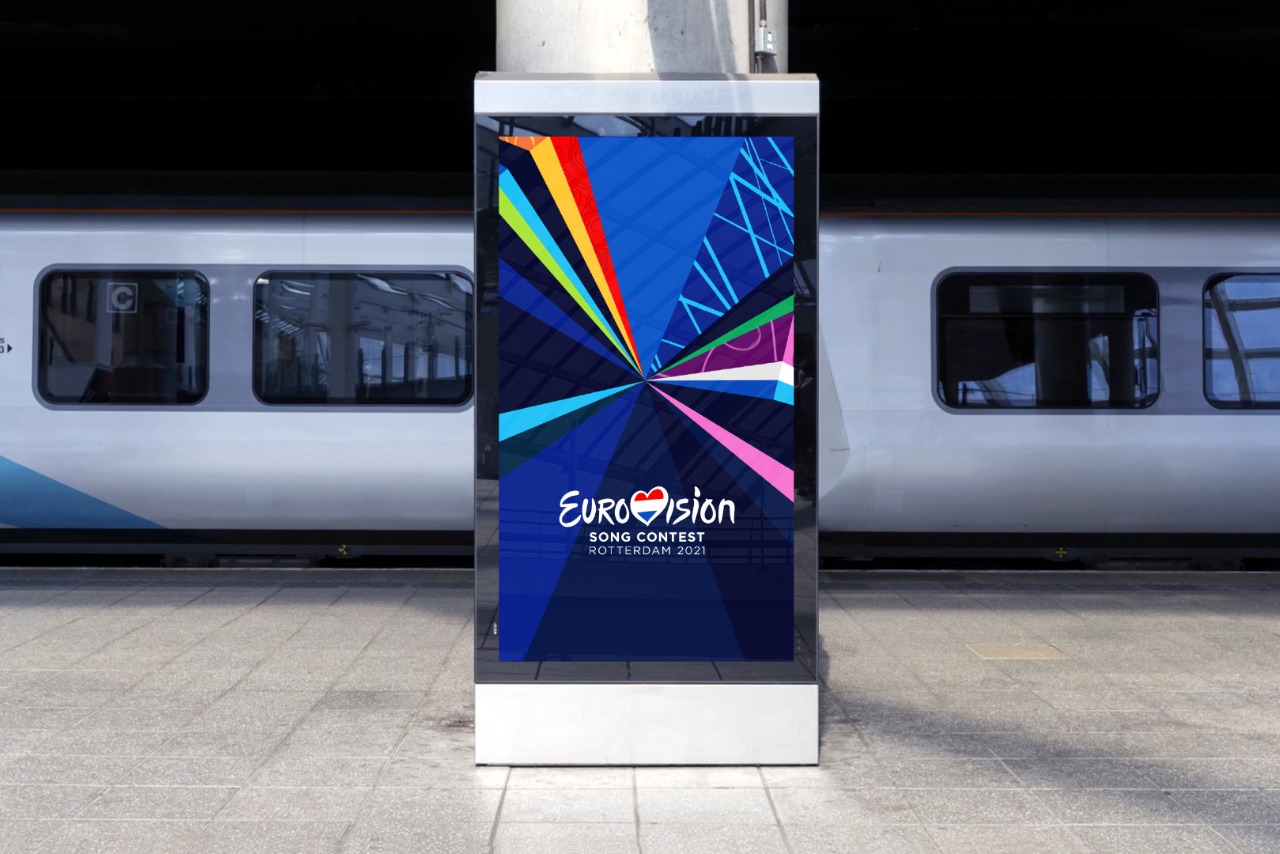 From digital out of home to social media and everything in between, versatility is key. Each element is equally important in creating an emotional connection with the audience, so give each one the same importance. For Eurovision, we pulled from Clever Franke’s logo and made sure our design system could help bring the same vibrancy to all platforms, creating a new, colourful experience everywhere.

We’re moving toward an era of hybrid events, with both remote audiences and in-person interactions. As we take on the challenge of pushing these events forward, striking the balance between the tangible and intangible becomes fundamental – and although hybrid events allow for more flexibility, they also add a few extras to the normal event package.

Lights, stage design, AR; everything has to work for both the audience at home and the people on stage. So, how does one produce and deliver design at scale and speed for such a vast array of formats? We started simply, by picking a concept that we could use across all the different touchpoints: the concept of “opening up”. We expressed this through shapes that opened up to reveal information in different contexts and across the broadcast. 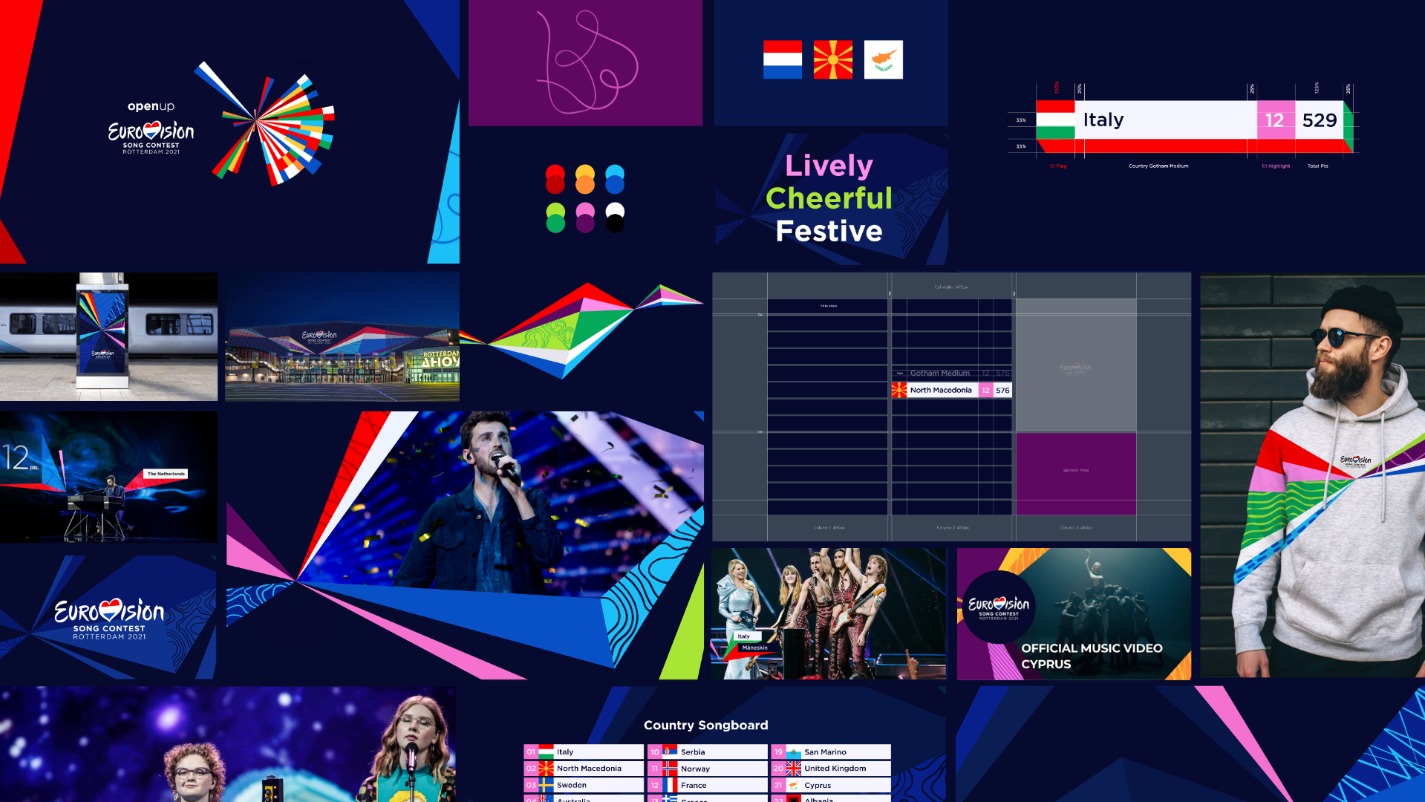 While working with multiple formats, having a smart, fluid design system helps create cohesive experiences while increasing speed to market. It also allows for balance of personality and functionality. The “Eurovision track” for instance—that frenetic zigzag of colour and texture you saw on screen—became the foundation of the brand’s language: as it opened up to reveal content or present information along its path, it captured the festivity of Eurovision while clearly representing geography and music.

Weaving culture into the design

In addition to supporting so many channels, another challenge was how to honour each of the participating countries, and especially the one hosting the show, the Netherlands. Through some hidden Easter eggs and more obvious nods to the Dutch culture, the contest’s new branding strengthened its geographic nature and ensured Holland’s style and colours were transmitted far and wide.

We used a set of organic and kinetic patterns to represent five different parts of the country. Crosshatching, for example, evoked the region’s famous lined tulip fields. As a Dutch resident myself, it was fun to put these together with the team. And before my bias shows too much, other countries were paid due respect, too: as singers took the stage, the Eurovision track’s palette changed to match the colours of their home country.

Before being able to create such a flexible identity, one has to be extremely familiar with the brand. A good tip is looking at previous styles and stripping it down to the essence, removing the unnecessary so that the key elements don’t get lost in translation from one format to another. With Eurovision, we studied earlier editions and used them as sources of inspiration, including stage design, but went for a more simplified style.

As brands experience a demand for more complex, hybrid experiences, smart design systems can help you show up for your audience with quality and speed, answering today's demands for agility, boosting accessibility and improving overall performance. Although it may be challenging, there’s nothing quite as rewarding as enhancing cultural pride through design, and I look forward to doing it again soon.

The agency model is crumbling: here's what comes next