Guy Horner, CEO of the TBA Group, reveals the logistical challenges of staging F1 Live London - a first-of-its-kind event for Formula 1 and the biggest commercial event in Trafalgar Square for a decade.

Ahead of this year’s British Grand Prix, London hosted the first ever Formula 1 Live – a one-day event featuring F1 stars, super-fast cars and live music for thousands of fans.

The large-scale brand experience took place on 12 July and aimed to open up F1 to new audiences and bring the sport’s stars closer to fans outside of the racing calendar. The event marked the first time in history that 10 F1 teams have come together outside of a race weekend to put on a show and it was the first time an F1 car had been driven in the city since 2004.

On the day, 100,000 spectators flocked to Trafalgar Square and Whitehall, while the event was broadcast globally on more than 30 channels. It was streamed live on social media and became the 8th trending topic globally on Twitter during the event.

Staging an event of this scale, is no mean feat. Agency Velocity Experience, part of TBA Group, was awarded the challenge with only 12 weeks to go. Guy Horner, the group’s chief executive officer, discusses the logistical challenges and lessons learned of F1 Live.

Timescale was our first major challenge. We started working on the event in March, which only gave us 12 weeks to deliver what was the largest commercial event in the centre of London for more than a decade. F1 Live was four events rolled into one: an F1 car run along Whitehall, a fan festival and concert in Trafalgar Square, plus a VIP hospitality area for 700 people at the National Portrait Gallery. 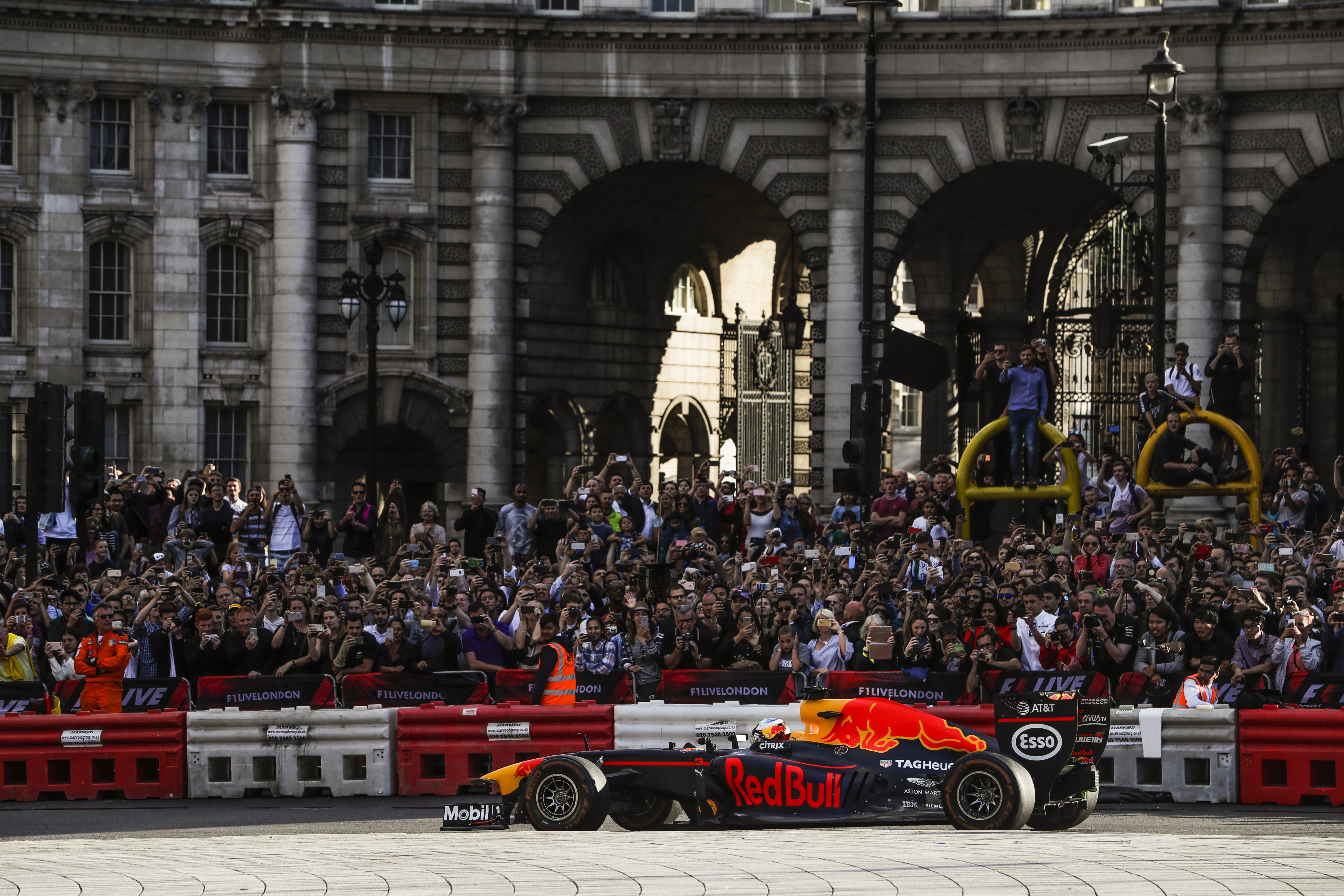 The location – being in the heart of the capital – called for complex and detailed planning. We worked very closely with the Greater London Authority (GLA), Westminster City Council (WCC), London & Partners and a number of major stakeholders to seek various permissions to get the event off the ground. For example, by working with the GLA and WCC, we secured a much needed Temporary Traffic Order to increase the speed limit along Whitehall to 70mph.

We also implemented an extensive road closure in the centre of London on a working day, which is unusual to say the least. This included deployment of several hundred metres of hi-hoard, pedestrian and water barriers and approx 600-plus stewards. We also undertook wide-ranging consultations with businesses and residents within the managed area.

Mid-way through the planning process, another major obstacle emerged. F1 Live was going to clash with the King of Spain’s state visit. King Felipe and Queen Letizia of Spain were to receive an official arrival ceremony on Horse Guards Parade, followed by a procession down The Mall to Buckingham Palace at midday on 12 July. For this, we liaised closely with the relevant authorities in London, Buckingham Palace and the Metropolitan Police to ensure there wasn’t a negative impact on F1 Live and that both events could co-exist.

We began planning this event around the time of the terror attack in the vicinity of the Palace of Westminster. At no stage did the authorities suggest that the event needed to be changed or cancelled. The attitude was that London is very much open for business. The process was straightforward, but it involved very careful planning with the Metropolitan Police. Security was never an issue, but always a priority. 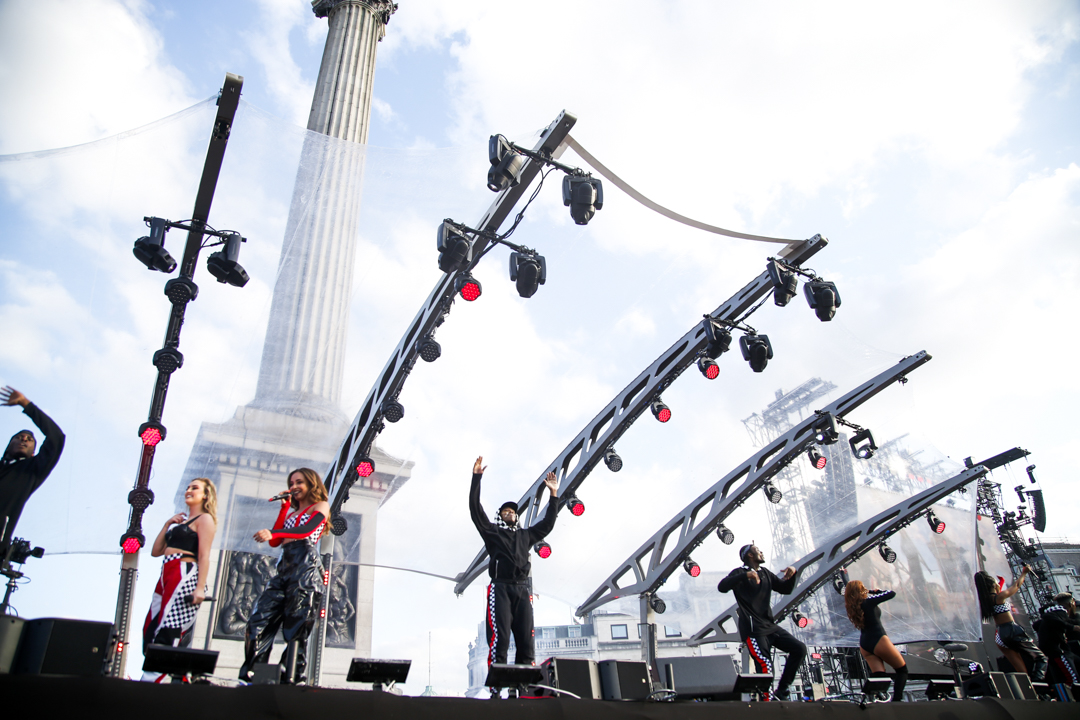 For the concert, we wanted to raise the bar on previous events that have taken place in Trafalgar Square. We opted for an innovative and transparent set design that enabled the audience to see Nelson’s Column and the Lions. Events tend to hide such features with large grey structures, which is a shame as it gives a real anchor to the location, connects the spaces and creates a sense of space.

While we are used to erecting staging in stadiums in a short timescale, the staging and production for F1 Live was ambitious. The team took over Trafalgar Square on Sunday (9 July) night. Cranes were used overnight and we had around 30 trucks on site. By the end of Monday, the stage was in place. By Tuesday lunchtime, giant LED screens around the area were up and running.

The weather became a nightmare, adding another layer of pressure and complexity. Torrential rain slowed the crews down as they had to work more cautiously and we lost a number of crucial hours. The lost hours were caught up overnight and in the morning when the rain had subsided.

F1 Live needed to be much better organised than a previous F1 event, which took place over a decade ago on Regents Street. The aim was for it to be the first of many central London-based F1 events, so it was important to build trust with the GLA and WCC. Crowd management was key. The London authorities publicly announced the event just 24 hours in advance of it kicking off. More than 100,000 people flocked to F1 Live on the day but the late announcement allowed us to manage the crowd safely. If it had been announced earlier, there could have been half a million people in the centre of London, which would have caused major disruption and spectators may have been disappointed that they couldn’t get close to the action.

We were also conscious that once the car show finished along Whitehall, people might head to Trafalgar Square to watch the likes of the Kaiser Chiefs and Bastille perform. We proactively managed the crowd by using LED screens in the area. The screens switched from the concert to messaging offering directions and advice on how to get home safely. 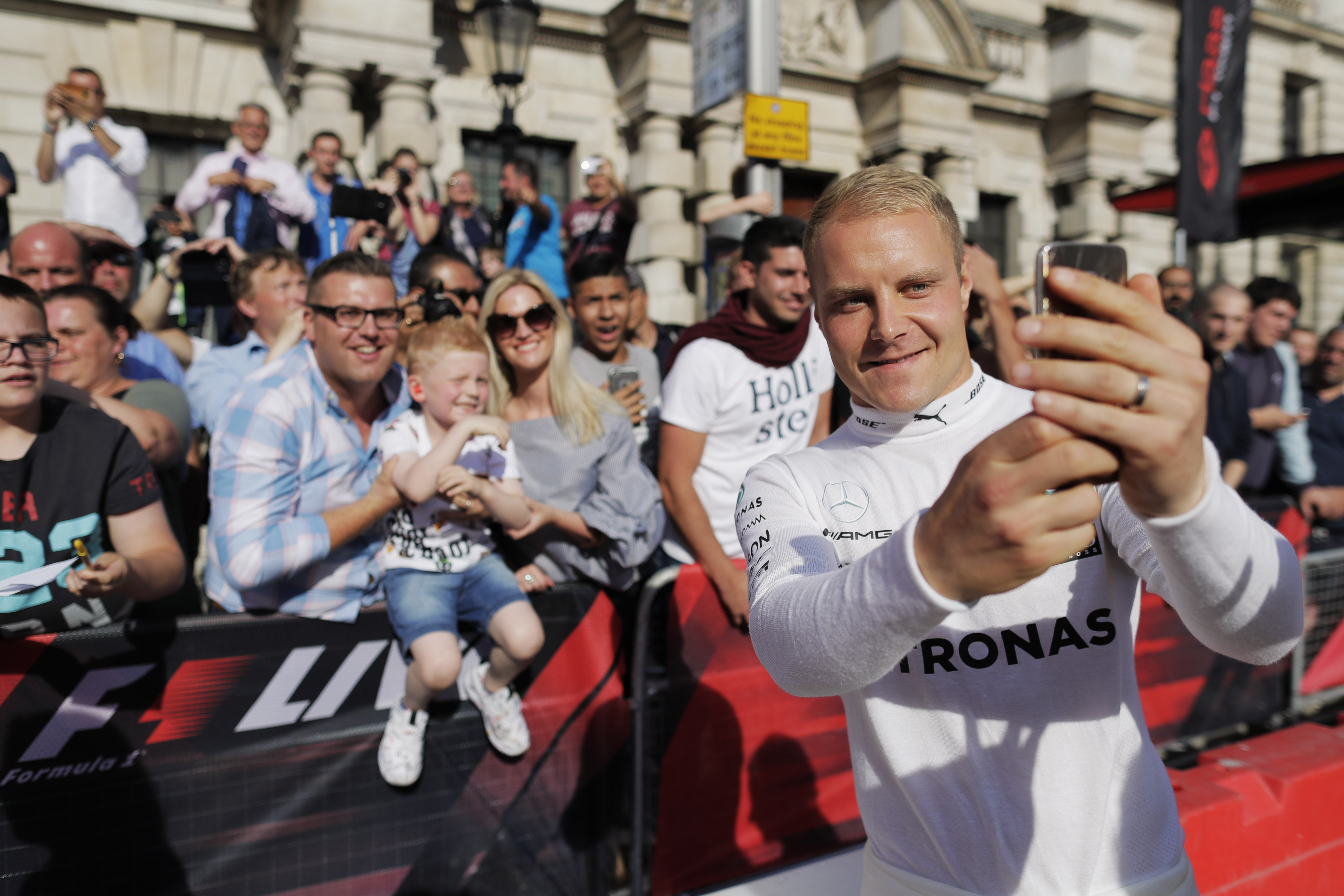 The key to overcoming the challenges with an event of this kind is expertise, experience and detailed planning. Former British F1 driver David Coulthard is a director of Velocity Experience and he has worked on many show runs with Red Bull. He provided intimate knowledge of the drivers’ needs and their cars.

We also have members of the team that have worked on big show productions for the likes of Beyonce and other artists and this provided the bands with reassurance that the concert would have a high standard of production. It also meant that we had an experienced team that works well together and at speed.

At every stage we had to carefully consider the look, feel and perception of the experience for all spectators, whether they were in the fan park area, watching the car run, or the live concert – either onsite and at home via the live broadcast. To ensure it was a high quality broadcast, we used 22 cameras, plus a helicopter camera and another on top of the National Portrait Gallery.

We delivered on brief in terms of fan engagement and getting people up close with the sport, offering a breadth of experience both on Trafalgar Square and with the car run on Whitehall. PR and Media KPIs were around delivering iconic imagery, which again we exceeded in both locations. The overall footprint of the event worked well, as did the timings.

There isn’t anything that we would fundamentally change but we would look at how we could evolve the experience and keep it fresh. It would be great for future F1 events to return to London, but also to recreate F1 Live in other cities around the world.

For your daily hit of news from the brand experience community, weekly brand updates and your monthly trend download, register and subscribe to Event and our bulletins.