The Campaign Media Awards on Wednesday night showcased the best in media thinking in the UK, from innovative use of traditional paid media to putting creativity into data. Gideon Spanier looks at the winners.

MediaCom won ten gongs, including the Grand Prix for most-awarded agency and Media Campaign of the Year for NHS Blood and Transplant "Missing type", on Wednesday night at the Campaign Media Awards held in partnership with Bloomberg Media.

Britain’s biggest media agency looks after more than £1bn in annual billings so has scale that no other shop can match. But MediaCom’s awards haul showed the range and variety of its work. MediaCom won five category sectors: Alcoholic Drinks for Crabbie’s, Media & Entertainment for Sky, Public Sector & Charities for NHS Blood and Transplant, Transport for Shell, and Travel & Leisure for Thomson.

These category awards are highly prized because brands want work that stands out and delivers results against its competitors in its category.

MediaCom picked up three other golds for Best Total Communications Programme for Churchill, Best Use of Branded Content for Scope and Best International Media Campaign for Danske Bank.

Winning ten awards capped a memorable night at the London Hilton on Park Lane for the WPP shop and its UK chief executive, Josh Krichefski, who stepped up from chief operating officer in January. Sixteen industry leaders from agencies, media owners and consultancies were split into five groups to decide the category awards during the main judging day at Bloomberg’s London headquarters in Finsbury Square.

The experience illustrated the "breadth and depth of the brilliant work happening in our market", as senior judge Rachel Forde, UK chief executive of Mediavest, put it. Pippa Glucklich, UK chief executive of Starcom, was the chair of judges. The judging panel reconvened at the end to pick the Media Campaign of the Year and the winner soon became clear because "Missing type" was the first choice of more than half the people in the room.

The work raised awareness about the need for blood donations by removing the A, O and B from everyday names that appeared in paid and owned media to illustrate "missing" blood types (see case study, below). "It’s the one we’d all have liked to have come up with," one judge confessed. "It’s such a simple idea," another said. The Sales Team of the Year awards are also divided by category and Channel 4 was the best-performing media owner.

It collected TV Sales Team of the Year for the third time in a row and also won gold in the IT & Consumer Durables category with "Encouraging viewers to watch paint dry" for Ronseal, a three-minute ad of a man varnishing a fence. Some of the other sales team winners were not the biggest beasts in their sector – most notably Primesight, which triumphed in outdoor, and ESI Media, which picked up cross-media. The judges said some sales team categories may need to be reviewed – for example, to include cinema.

There were a number of special prizes, including the Bloomberg Data & Creativity Award, which was won by OMD UK for Eurotunnel "Le shuttle". The work segmented customers by their interests, behaviours and past interactions, then produced 7,000 tailored creative executions. The data was updated during the campaign by OMD, helping to drive a 10% rise in average order value for Eurotunnel.

Viktoria Degtar, head of sales and marketing, EMEA, at Bloomberg Media, said the winning work exemplified "how brands are harnessing the power of data to create impactful, personalised and innovative experiences for their consumers". That’s a good yardstick by which to measure all the winners at the 2016 Campaign Media Awards, because the future of this industry will depend in large part on innovation, personalisation and, importantly, creativity.

Media campaign of the year 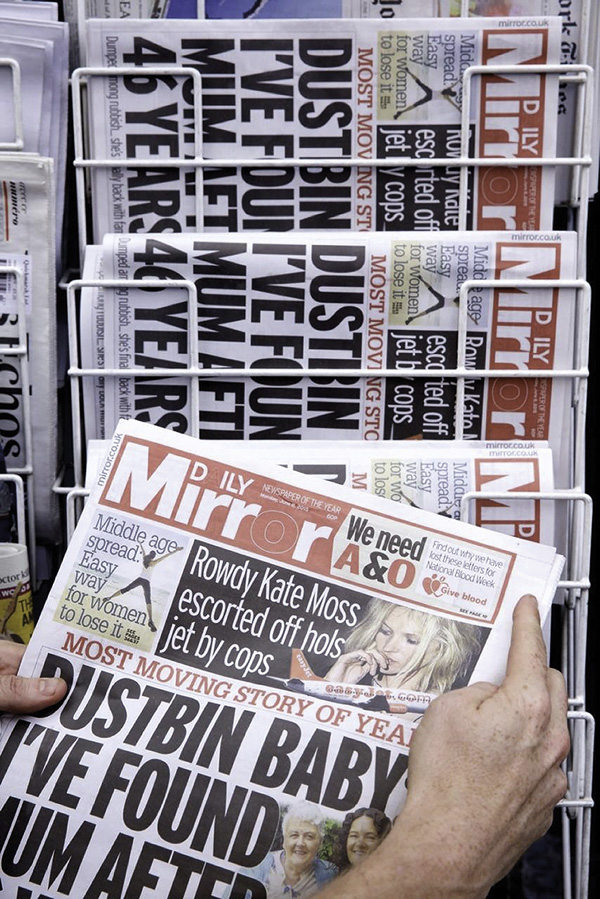 During National Blood Week last year, MediaCom and NHS Blood and Transplant launched a disruptive campaign to capture attention and highlight the need for new blood donors after a 40% decline in a decade.

The activity sought to attract the public’s attention by demonstrating the importance of replacing A, O and B blood types. This wasn’t just to raise awareness but to drive behaviour change by attracting new donors. The big idea was "Missing type" – removing the As, Os and Bs from media, brands, high-profile places and famous street signs.

It was simple to activate – minimal effort was required to create the desired disruption. But it involved collaboration on a grand scale between MediaCom, which handled planning, and a string of other agencies including Engine for creative, Carat for buying, 23red for brand partnerships and Twentysix for organic social – "to ensure all communications fit into the overarching strategy", as MediaCom put it. The strategy had three phases. 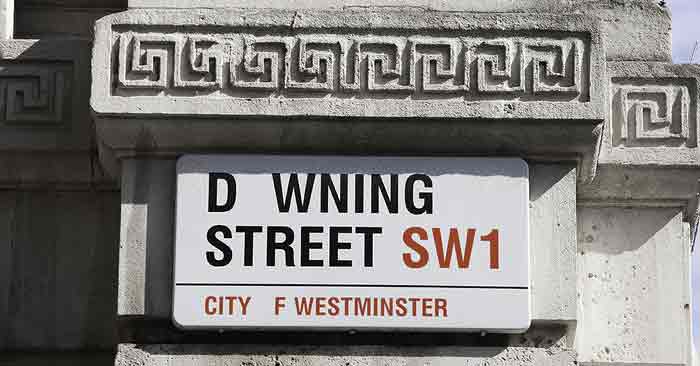 First, tease and intrigue as major brands such as Odeon, Waterstones and Santander dropped the letters A, O and B from their names – even the Downing Street sign was changed.

Second, give context and meaning through media partnerships, including with the Daily Mirror and Metro across print and online. Three, retarget and convert by getting people to register, chiefly through digital and social channels. NHS Blood and Transplant was the first UK advertiser to use Instagram Carousel ads. All work linked to the Blood.co.uk website. The result was 30,000 new donors – 20,000 more than National Blood Week in 2014.

Traffic to Blood.co.uk from social media sources rose 350% year on year. Almost 500,000 people engaged with the campaign on Facebook. One thousand brands, including Campaign, showed their support. And there were 689 pieces of news coverage. It was the undisputed Media Campaign of the Year for the judges of the 2016 Campaign Media Awards. 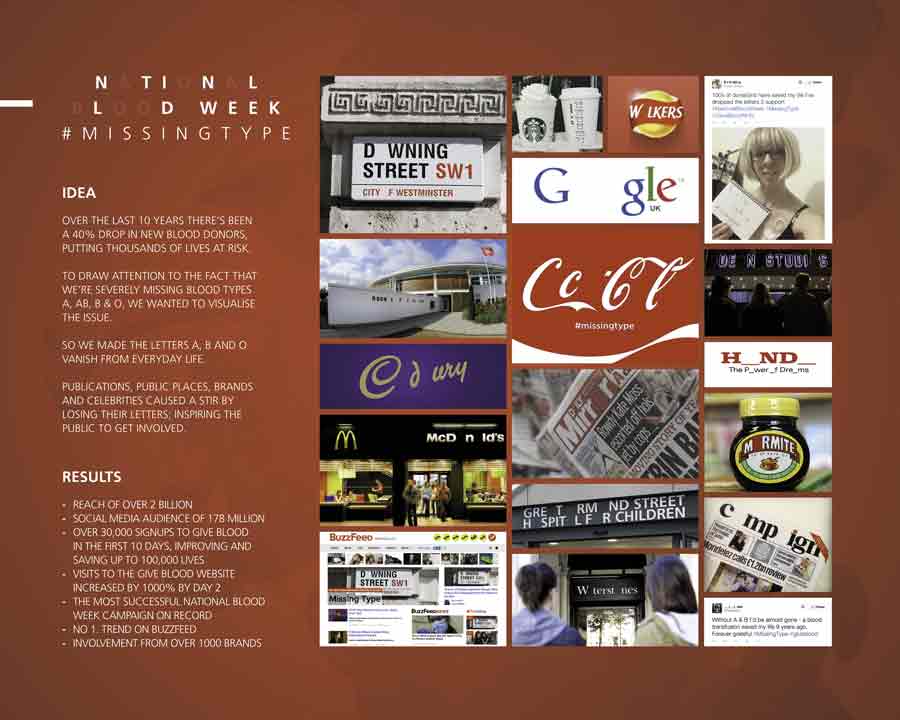 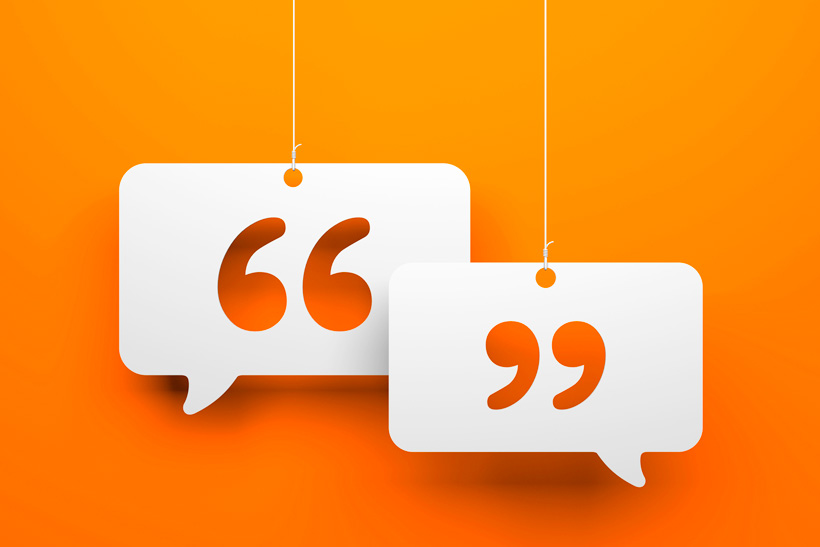 We want to hear from you. We would like your feedback on the Media Week Awards and Campaign Media Awards. What could we do better? Should there be new categories? How can our industry learn from the award-winning work?
>>>Click here to leave your suggestions<<<

The cat that got Media Week judges purring

NHS' 'Missing type' blood appeal is back with international campaign

Media is in the middle of a forest fire