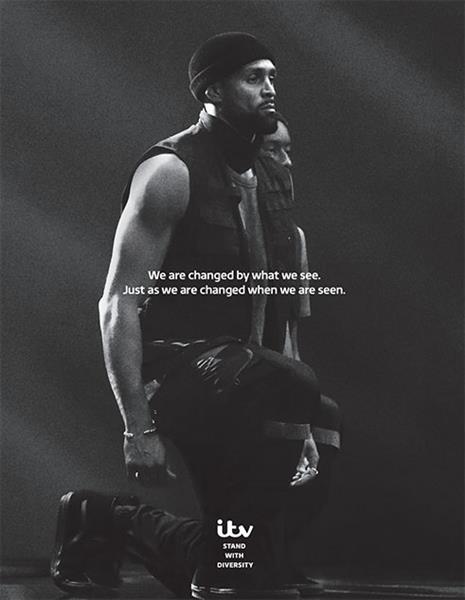 ITV ran an anti-racism ad in support of dance group Diversity, following complaints about its Black Lives Matter-themed performance on Britain's Got Talent.

The print ad, created by Uncommon Creative Studio, appeared in national newspapers and social media two days after Ofcom, the media regulator, dismissed more than 24,000 complaints about the broadcast and defended the importance of what it called "freedom of expression". The original performance on 5 September, which referred to the killing of George Floyd at the hands of the US police in May and the wider impact of coronavirus, poverty and capitalism, featured a white performer kneeling on the neck of Ashley Banjo, the leader of Diversity, echoing the manner of Floyd’s death.

ITV’s ad showed Banjo taking a knee during the routine and the message: "We are changed by what we see. Just as we are changed when we are seen." At the bottom of the ad, the broadcaster showed its support for the dance group by saying: "ITV stand with Diversity."

Boots "Bags of joy" by VMLY&R

Northern "Go do your work thing" by Frame

Nationwide "Save Money: My Beautiful Green Home" by Wavemaker

Dunelm "Dun your way" by Creature

McDonald's "McDelivery and the movies" by Leo Burnett London

ITV "Together we will never lose. ITV stand with England" by Uncommon Creative Studio