ITV has won plaudits for running an anti-racism ad in support of dance group Diversity, following complaints about its Black Lives Matter-themed performance on Britain’s Got Talent.

The print ad, created by ITV’s ad agency Uncommon Creative Studio, appeared in national newspapers and social media on Saturday (19 September) – two days after Ofcom, the media regulator, dismissed more than 24,000 complaints about the broadcast and defended the importance of what it called “freedom of expression”.

The original performance on 5 September, which referred to the killing of George Floyd at the hands of the US police in May and the wider impact of coronavirus, poverty and capitalism, featured a white performer kneeling on the neck of Ashley Banjo, the leader of Diversity, echoing the manner of Floyd’s death.

ITV’s ad (pictured below) showed Banjo taking a knee during the routine and the message: “We are changed by what we see. Just as we are changed when we are seen.” 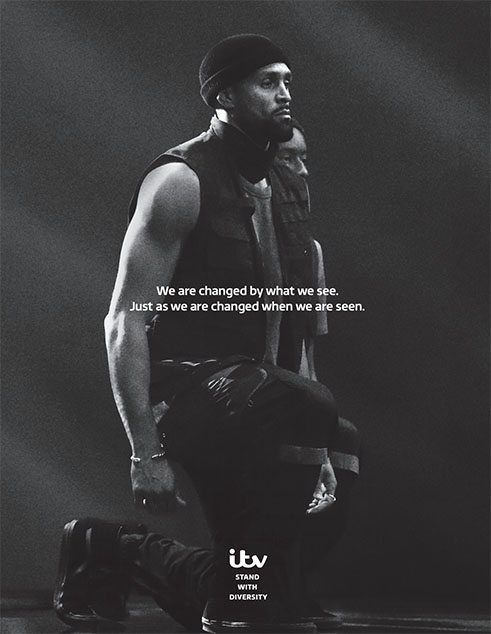 At the bottom of the ad, the broadcaster showed its support for the dance group by saying: “ITV stand with Diversity.”

Banjo, who is a BGT judge, posted the ad on Instagram and Twitter and wrote: “This is what change looks like. ITV stand with Diversity and we’ve never been prouder.”

Alesha Dixon, a judge on BGT, also praised the ad on Instagram, saying “Well done ITV for standing with Diversity! Proud of you!” She went on to wear a necklace on BGT on Saturday that spelled out the letters B-L-M.

The ad won plaudits in the wider media industry.

Sathnam Sanghera, a columnist on The Times and former chairman of Creative Access, which helps young people from diverse backgrounds break into the creative industries, posted the ad on Twitter and wrote: “Respect to ITV for running this advert in The Times after all those complaints to Ofcom.” His tweet got close to 50,000 likes.

Respect to @ITV for running this advert in The Times after all those complaints to Ofcom pic.twitter.com/egdoygbAH6

Asked about the significance of ITV’s ad, Sanghera told Campaign: “Those of us campaigning for diversity have long argued that believing in it needs to go beyond the issuing of bland mission statements – it involves fighting for the cause even when it’s uncomfortable.

“This is the first time I recall a British corporation taking on the culture warriors and actually fighting the fight. It feels like hope.”

Pat Younge, who used to be one of the most senior black executives at the BBC and now runs TV company Cardiff Productions, said on Twitter: “Total respect to ITV for taking a stand.” He added the hashtag “allies”.

ITV, Britain’s biggest commercial broadcaster by ad revenues, first gave a statement in support of Diversity’s performance on the day of the original transmission but, as Ofcom received a growing number of complaints, the broadcaster reiterated its support last Tuesday (15 September).

Diversity’s performance was “an authentic, heartfelt response to many of the issues and events which have affected society in 2020”, ITV said.

ITV credits Nils Leonard, one of the co-founders of Uncommon, for coming up with the idea of the ad in support of Diversity the following day.

The agency contacted Rufus Radcliffe, the marketing director of ITV, on Wednesday evening – before Ofcom announced the following day that it was rejecting the complaints.

Uncommon had used the line "We are changed by what we see. Just as we are changed when we are seen" in a previous ITV spot last year.

The Uncommon team worked on several versions of the artwork on Thursday and ITV agreed to run the ad.

The final version was signed off on Friday, when it was released to journalists, and the ads were placed in the Saturday editions of four national newspapers, the Daily Mail, The Guardian, The Sun and The Times. The press ads cost under £100,000.

ITV also posted the ad on social media and used some paid social to promote the message. The timing helped to promote BGT which aired on Saturday evening.

'More work to be done to improve representation'

ITV responded to the Black Lives Matter movement in July 2020 when it unveiled five steps to increase the number of opportunities for black, Asian and minority-ethnic underrepresented groups across its business and on-screen, including mandatory training on race for all staff and presenters.

Dame Carolyn McCall, chief executive of ITV, admitted at the time: “There’s much more work to be done to improve representation in our leadership roles, as well as the presenters of our highest-profile programmes, the lead actors in our dramas and behind the camera in commissioning and in key editorial roles, like writers, directors and producers.”

According to Ofcom’s diversity and equal opportunities report from September 2019, ITV had the lowest representation of employees from minority ethnic groups among UK public-service broadcasters, behind the BBC, Channel 4, Sky and Viacom/CBS.

The broadcaster has stepped up its efforts to improve diversity, including in its marketing. The line “We are changed by what we see. Just as we are changed when we are seen” featured in a spot called “Television” that debuted in April 2019.

That ad featured a diverse mix of archive and contemporary clips, voiced by Sir Trevor McDonald, and showed television’s evolving role at the heart of national culture during memorable and difficult moments, as part of ITV’s new strategic positioning, called “More than TV”.