The 'JägerHaus' has established itself as a key attraction at UK music festivals. Campaign explores how Jägermeister's music-focused platform and venue has developed since its launch in 2015.

At this year’s All Points East, a 10-day music festival held in east London's Victoria Park in May and June, German spirits brand Jägermeister staged the most ambitious version yet of its "JägerHaus" – a multilayered venue featuring immersive elements, live music, bars and dedicated areas for experiences such as cocktail-making classes.

This year also marks five years since the JägerHaus concept was first unveiled, at Field Day festival in 2015. Designed to bring friends closer together through music in an edgy environment, the experience also aimed to promote the brand’s serves, such as its Ice Cold Shot and long drink Root56. Jägermeister wanted to deepen brand engagement among its core target audience of 25- to 35-year-old men.

While the activation has remained true to its roots, it has also evolved over the past five years, in line with the brand's – and consumers' – changing needs. Jägermeister has worked with Frukt for the past five years on the concept, its build and its evolution. For Jim Robinson, managing director at Frukt, one of the biggest challenges has been making consumers aware that there’s more to Jägermeister than the Jägerbomb.

"The JägerHaus is now widely respected as one of the best brand experiences at festivals – people look for it, spend time with it and return to it again and again," Robinson says. "It continues to achieve what we wanted it to do. People tell us that their favourite things about the JägerHaus is the atmosphere that it creates and the music, with visitors able to see exciting new talent, combined with interesting, established artists on a small, intimate stage."

Samantha Green, Jägermeister UK's event manager, adds that the JägerHaus is an integral part of the brand’s marketing strategy. "It offers us an opportunity to engage with our core consumers and for them to experience the very best of the brand, alongside new talent and our key drink serves such as Jägermeister Ice Cold Shot and Jägermeister Mule," she explains.

Green attributes the activation's success over the years to a combination of consistency, in both approach and messaging, and the ability to make small tweaks based on customer feedback, delivering a more memorable experiece overall.

Its first inception was at Field Day in June 2015; between then and 2017, the JägerHaus travelled to 13 festivals, making appearances at the likes of Bestival, Kendal Calling and Reading. Guests could visit a number of areas within a massive structure, each with its own look and feel.

Spaces included the Lodge and the Backyard, where festivalgoers could enjoy a Jägermeister serve and participate in interactive games; the Warehouse, featuring live music; and the Loft members/VIP bar area, located on the upper floor. Each space was connected via luminous and aromatic tunnels to ensure a fully immersive experience. 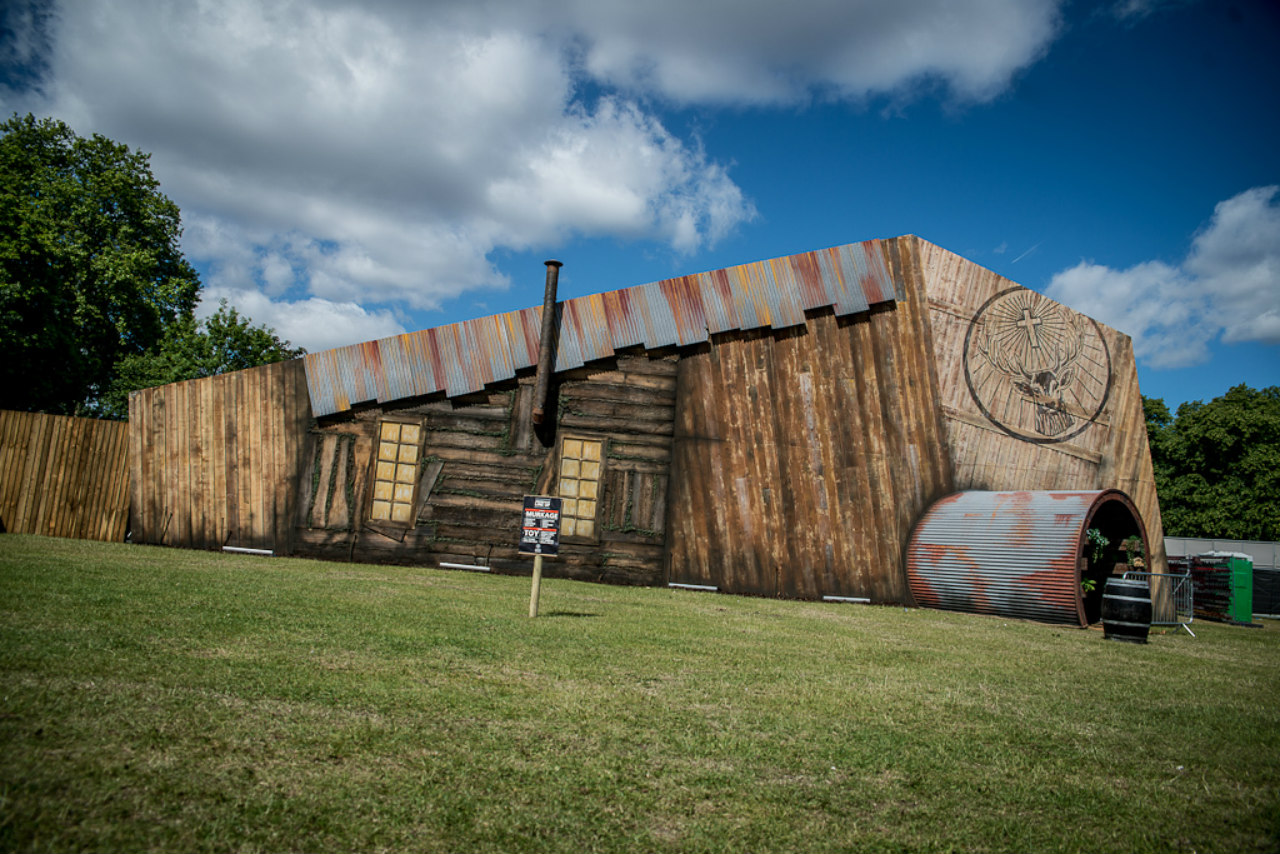 By 2017, Robinson says the brand had increased its investment in programming and enhanced the sound and lighting, as well as introducing a bespoke DJ booth in the Backyard area. The list of cocktails available in the Loft was expanded, too, and the area was also reserved for a Berlin-themed brunch at some festivals, attended by the media and consumers, with each course paired with a Jägermeister cocktail.

For 2017, the brand also upgraded the Lodge space by introducing phone-charging stations, while it also improved the view of the stage from the Backyard and enhanced the artist experience on stage. The Loft space was overhauled to increase its VIP look and feel, enabling it to effectively showcase key Jägermeister products. A basketball hoop, dubbed "Give it a shot", was also added to the structure. 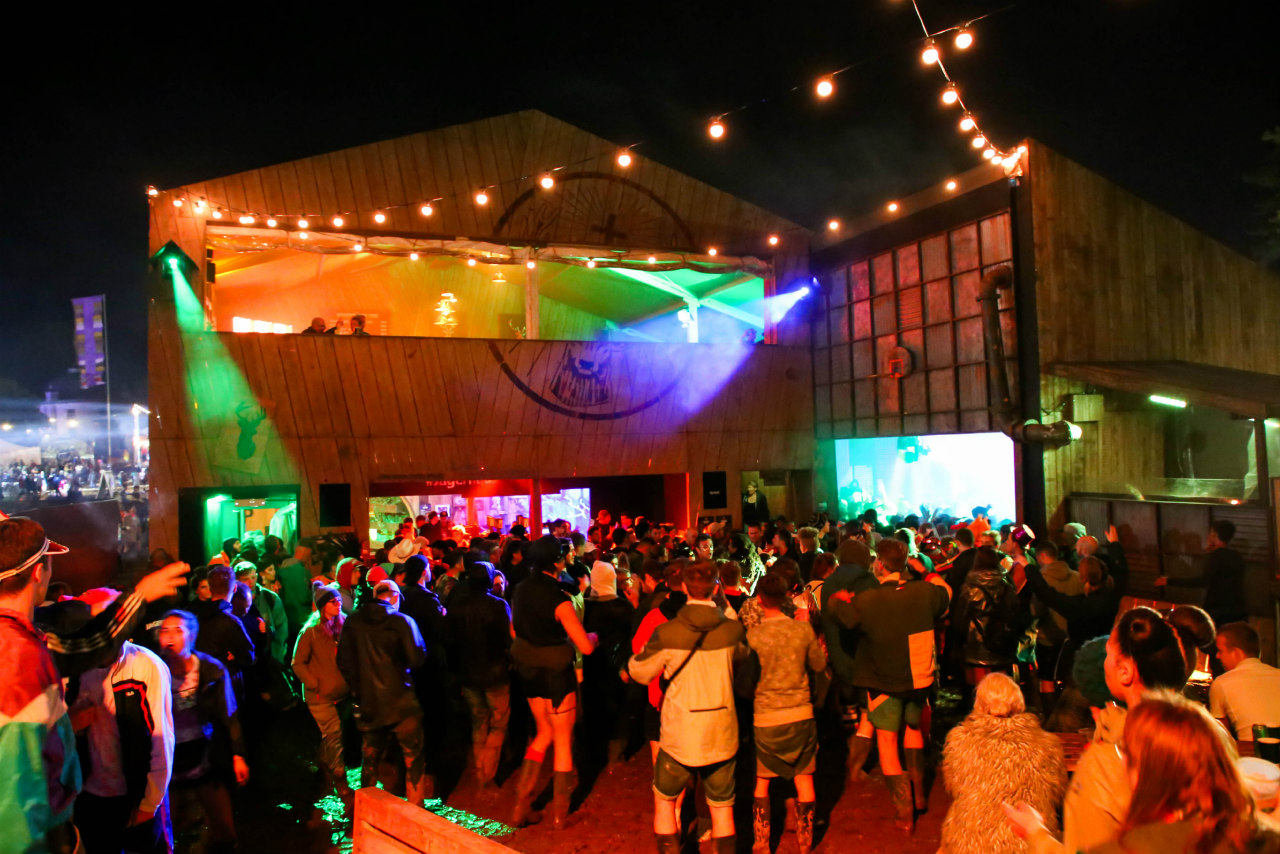 At 6pm every day, Jägermeister introduced the Ice Cold Hour, where trays of Ice Cold shots in glasses made of ice were gifted to consumers by brand ambassadors. Coveted Jägermeister merchandise such as bandanas and hip flasks were also given away. This was repeated in 2019.

Fast-forward to this year’s All Points East, where JägerHaus went even bigger, spanning seven areas within the structure instead of the previous six. The Lodge was transformed and renamed Basement Bar, reimagined as an underground Berlin-themed industrial space, aiming to immerse visitors in Jägermeister’s brand values. Wood panelling gave way to concrete-textured walls and bespoke wallpaper made from ripped JägerHaus line-up posters from the past five years covered the bar.

A new back bar lit up by "Ice Cold Shot" in neon lights enticed consumers to try the Jägermeister drinks on offer, while a specially commissioned stag mural encouraged visitors to capture and print their own memories from the JägerHaus via a "selfie spot" photo booth. 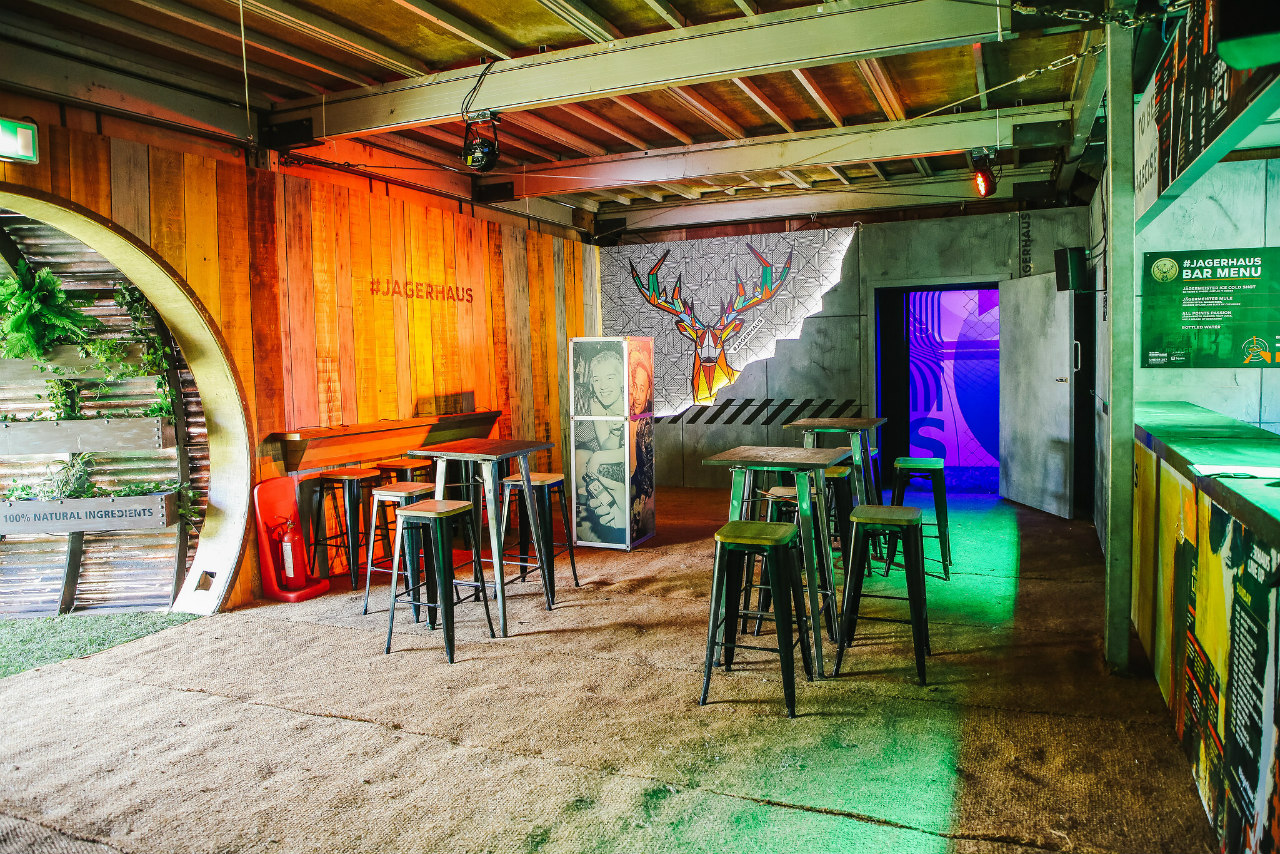 Those who could access the Loft were rewarded with a prime view of both the Warehouse and the Backyard spaces – which featured new furniture painted with Bauhaus-style patterns. Visitors could indulge in games such as shuffleboard or fußball on bespoke tables and enjoy complimentary Jägermeister drinks. 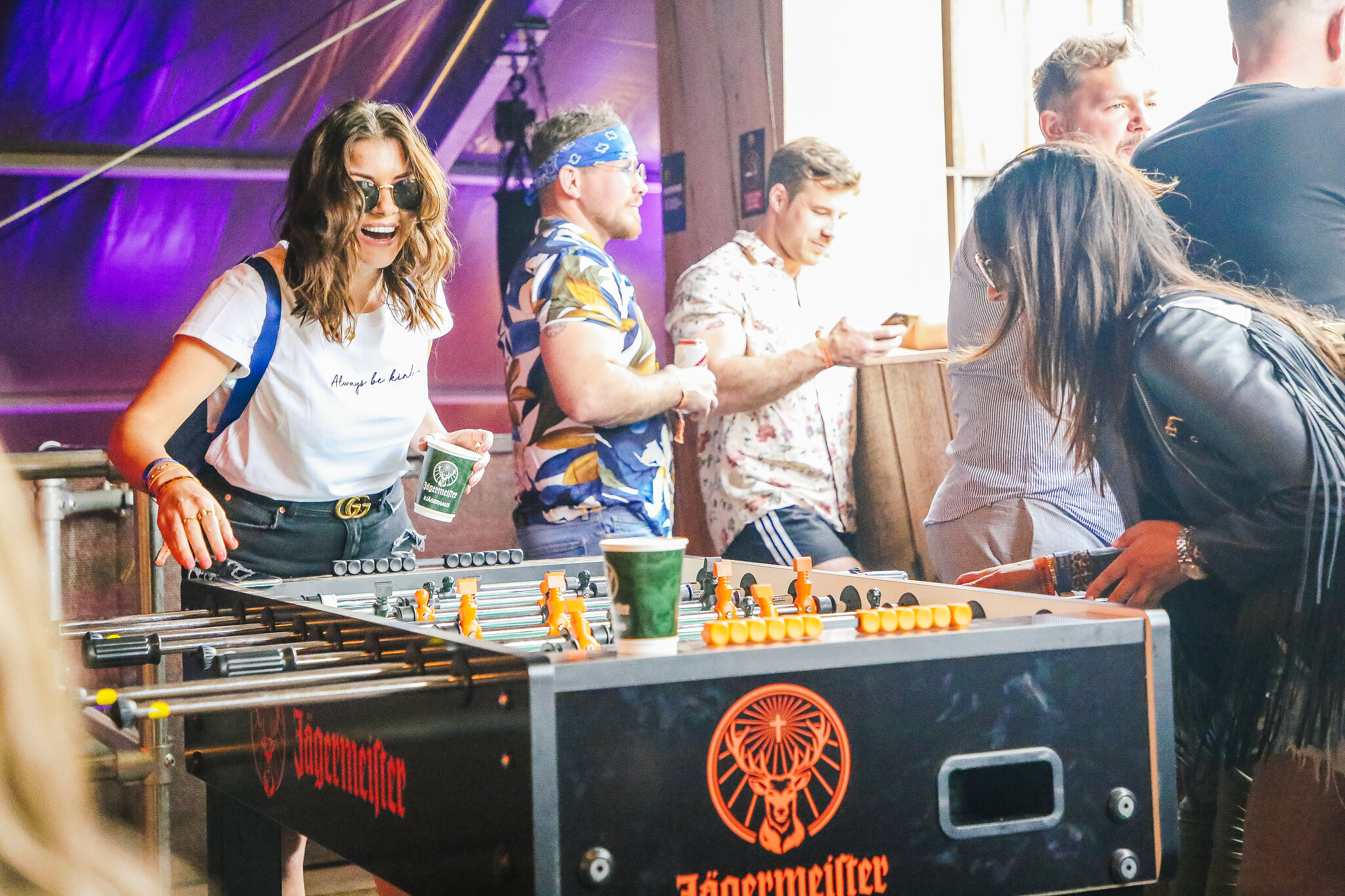 The woodland-themed tunnels of previous years were reimagined, too, with the neon tunnel, which linked the Basement Bar to the Backyard, refitted with neon tubes and overlaid with silver caging, in keeping with the new underground theme. The effect was so striking that the area became an unofficial selfie spot, with multiple photos of the space spotted across social media. 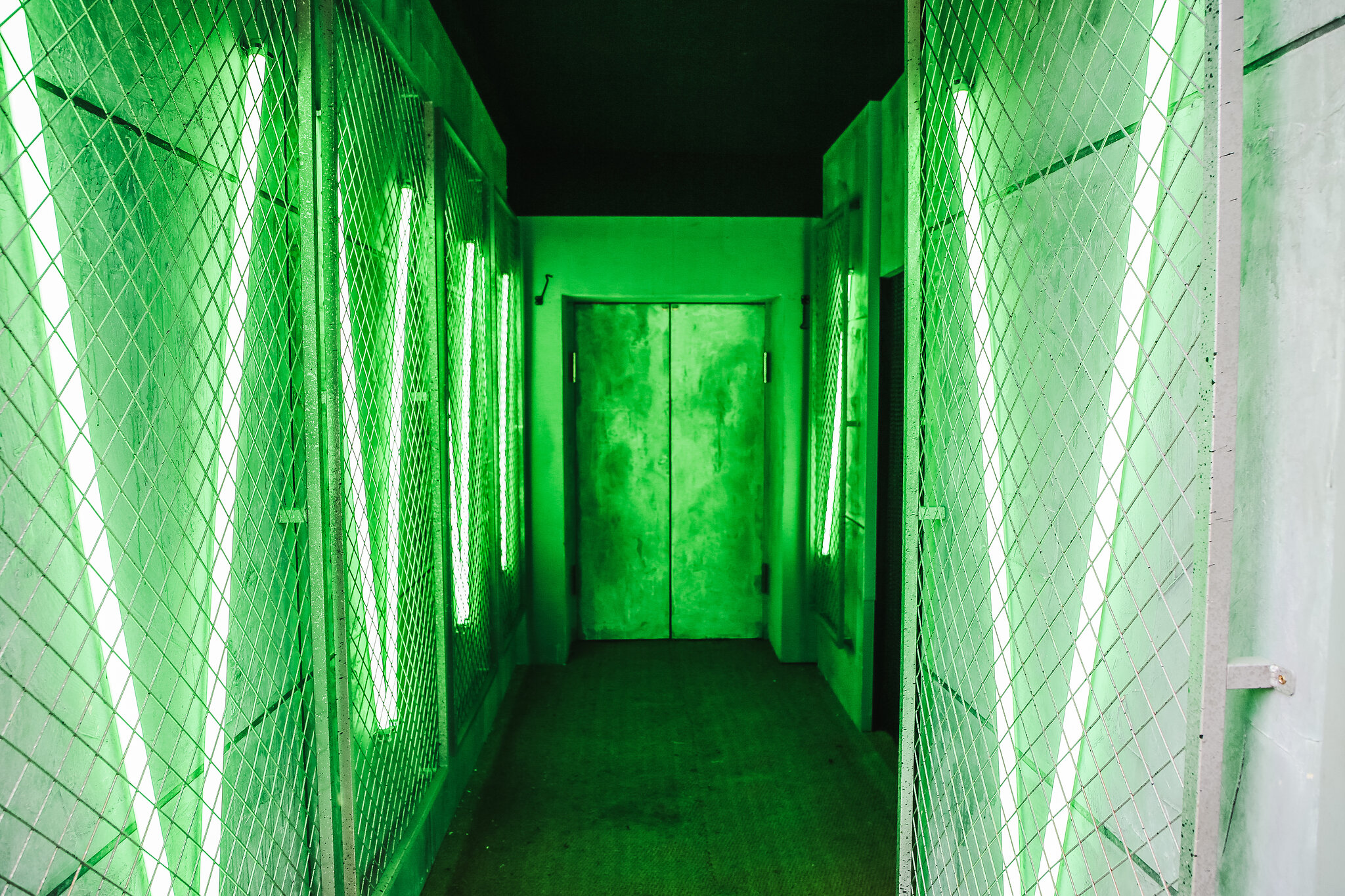 There was also a night tunnel filled with red, blue and green lights, with each colour revealing a vibrant set of images printed on the walls. This year, custom-made graphics were created for the walls in Bauhaus style, with hidden "ice cold" messages that were revealed intermittently as the lights drew visitors towards the next space.

The fences of the Backyard enclosure became a gallery of images showcasing the best of the music talent from All Points East 2018. Alongside classic Jägermeister drinks, the activation also featured the first-ever festival-specific beverage called All Points Passion – a cocktail of Jägermeister, passion fruit and grenadine – that was developed and served across the site.

What’s in store next year?

Green says the JägerHaus will be back next year and, judging by its 2019 iteration and feedback thus far, it is likely to keep to the "bigger and better" concept. For Robinson, listening to consumers and making adjustments has been crucial to keeping the activation fresh year on year.

"It’s easy to overthink how consumers will connect with what you produce – keeping it simple, fun and high-quality are what matters," he says.

RIP Woodstock 50: why some festivals are best left in the past

Turkey of the Week: Jagermeister's attempt of irreverent fun is so near and yet so far

Meet the team: Event visits the offices of agency Frukt

Agencies line up for Jagermeister brief