Punk’s de facto poet laureate, John Cooper Clarke, is among those to have benefitted from the rising popularity of spoken word in ads, driven in part by the current need for solace and humour, but brands must be careful not to stifle creativity in the process.

Spoken word has been a popular way to tell stories for thousands of years, from Homer and Dante to Chaucer and Shakespeare and, in an always-on, digital world, simple, verbal communication has a new-found purity and freshness that chimes with audiences.

The advertising industry, which is always keen to tap into culture, has picked up on this trend.

A growing number of brands, including Coca-Cola, EE, Facebook, Nationwide and Ovo Energy, have turned to poets and writers – from long-established names such as John Cooper Clarke (pictured, above) and Pam Ayres to younger, more diverse voices, such as George the Poet, Hussain Manawer and Kae Tempest.

Indeed, Covid-19 has increased the popularity of spoken word as many of us seek comfort, solace and humour from simpler pleasures. 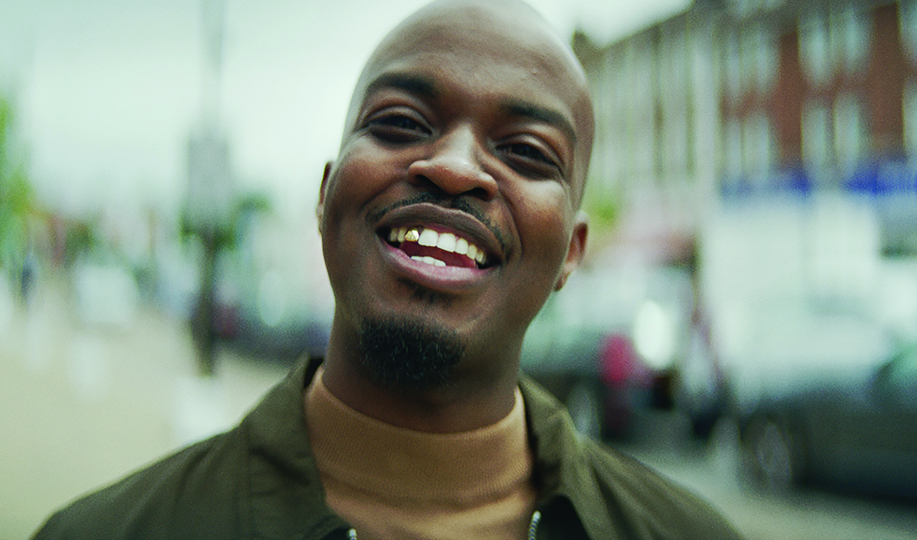 George the Poet (pictured above) became the new voice of Coca-Cola in a post-lockdown search for optimism, Kae Tempest provided the words for a Facebook campaign calling for unity during the pandemic and Hollie McNish, another spoken word artist, told the eco-savvy masses that “We don’t need hope, we are hope”, in a spot for Ovo Energy.

Cooper Clarke, an acclaimed punk-poet and Ronnie Wood lookalike, who rose to fame in the 1970s, says he likes collaborating with brands. “People get very snarky about advertising, especially with the poets for some reason,” he tells Campaign. “You might as well believe that if somebody takes your photograph, they’ve stolen your soul.”

The author of poems including Get Back on Drugs, You Fat Fuck and Evidently Chickentown has a pragmatic approach. “Advertising is where poets go to work,” Cooper Clarke says.

“I’ve never recommended nothin’ I wouldn’t eat myself – Domino’s Pizza, McCain Oven Chips, all of them written in my style. These days copywriters are just sensational, it’s as though I had written it myself.”

Ahead of the publication of his autobiography, I Wanna Be Yours, on 15 October, Cooper Clarke recalls one of his earliest and more memorable forays into advertising in 1988, when he became the Honey Monster’s first sidekick in a pair of ads for Sugar Puffs.

“I used to be a Sugar Puffs fan, but I kind of put myself off it,” Clarke says. “When you’re doing them ads, you find yourself surrounded by little dishes all over the place, and you get a bit peckish as the days go on.”

“I didn’t make the rhyme, but I wish I did,” Cooper Clarke says.

Some of the new wave of younger, quick-tongued poets are also happy to consider working with brands. 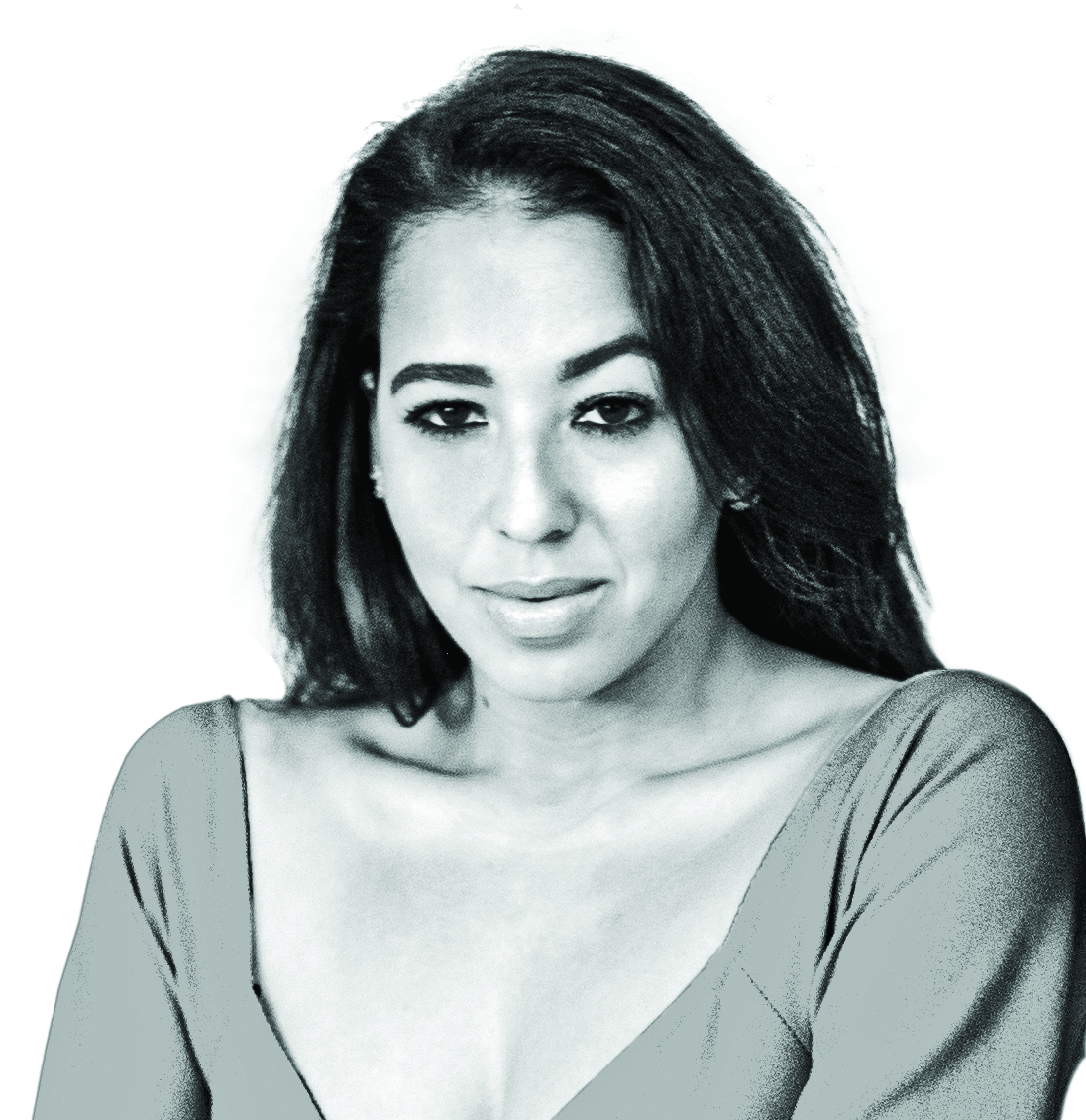 “If Rolls-Royce wants to work with me and do an ad, I’m ready,” Salma El-Wardany (pictured, right), a spoken word artist and BBC Radio presenter, says. “It’s way better to get George the Poet – one of the most profound poets and forward thinkers of our generation – in a Coca-Cola ad, than fucking Kendall Jenner in a Pepsi ad, you know?”

El-Wardany, who has given two Ted Talks, wrote a blog during the Arab Spring – “You know, it’s not every day you fight in a revolution,” she says – and stumbled upon poetry by accident after entering the world of marketing where she found she was “losing her soul quicker than she had thought”.

She began her spoken word career at LA’s Poetry Lounge in 2017 and her work gained snaps (poetry’s answer to applause) for its frank depictions of sex, periods and life as an Egyptian-Irish-Desi Muslim.

Continuing her work in “dismantling the patriarchy” via collaborations with Always, Bumble and Hinge, El-Wardany admits she wouldn’t work with a brand on something that actively contradicts her moral compass.

“Spoken word isn’t for the faint-hearted – these are people with very strong, principled messages,” she says.

“Poets have strong moral frameworks, so if Rolls-Royce came to me with a message that I was absolutely not OK with, then I wouldn’t do it.”

Spoken word has been attracting younger audiences partly because of its closeness to hip hop music and culture, according to Luke Alexander-Grose, a junior planner at VCCP, who also performs under the name Luke AG.

“Spoken word is almost a subgenre of rap music,” he explains. “As it becomes more popular, people will see spoken word and poetry as rap’s more wholesome cousin, for better or worse.”

But Alexander-Grose warns that the relationship between a spoken-word artist and a brand can be difficult to navigate. Poets run the risk of “losing a certain degree of authenticity”, or worse, “losing their voice” in working towards a brief, he says. “Your story as a poet should be genuine and personal, so the problem with having a brand commission is that your work is tied into something commercial.”

When looking at the UK’s spoken word scene, there are few as wholesome as Hussain Manawer – a mental-health advocate whose FA-commissioned poem, This is England, won acclaim from England footballers Harry Kane and Raheem Sterling as well as the Duke and Duchess of Cambridge. 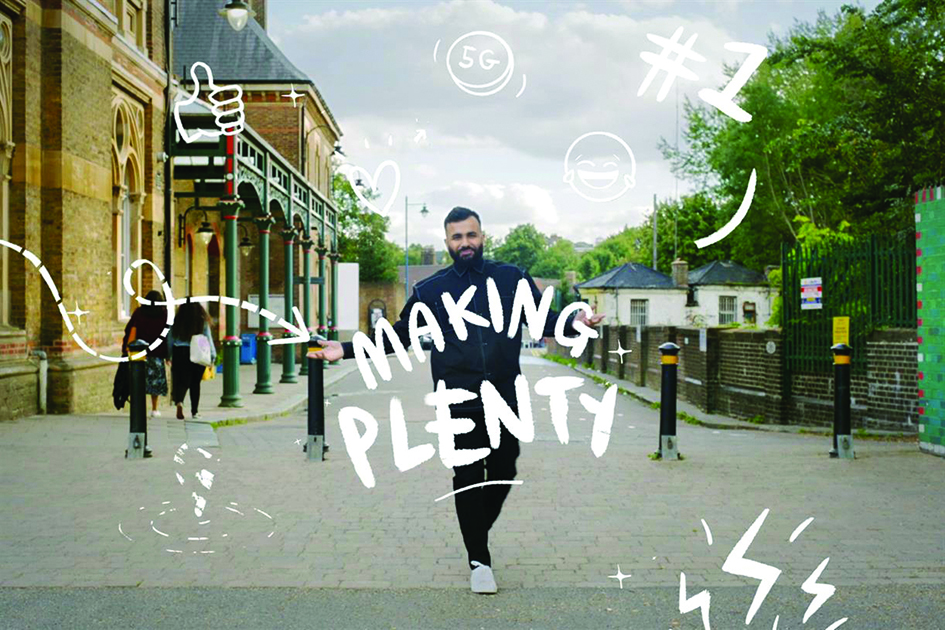 In August, Manawer sauntered through the streets of London to discuss the perils of “network envy” for EE in a spot created by Wunderman Thompson (pictured above). He has also worked on campaigns for the Mayor of London and Samaritans.

It is vital to give a spoken word artist some freedom, according to Steve Aldridge, chief creative officer at Wunderman Thompson. “Straddling the line between playfulness and purpose is really in the hands of the artist,” he says. “I’ve worked with Manawer a couple of times, and his ability to listen is incredible. Manawer hears the purpose of the campaign and what you’re trying to communicate, but he reads the moment.” 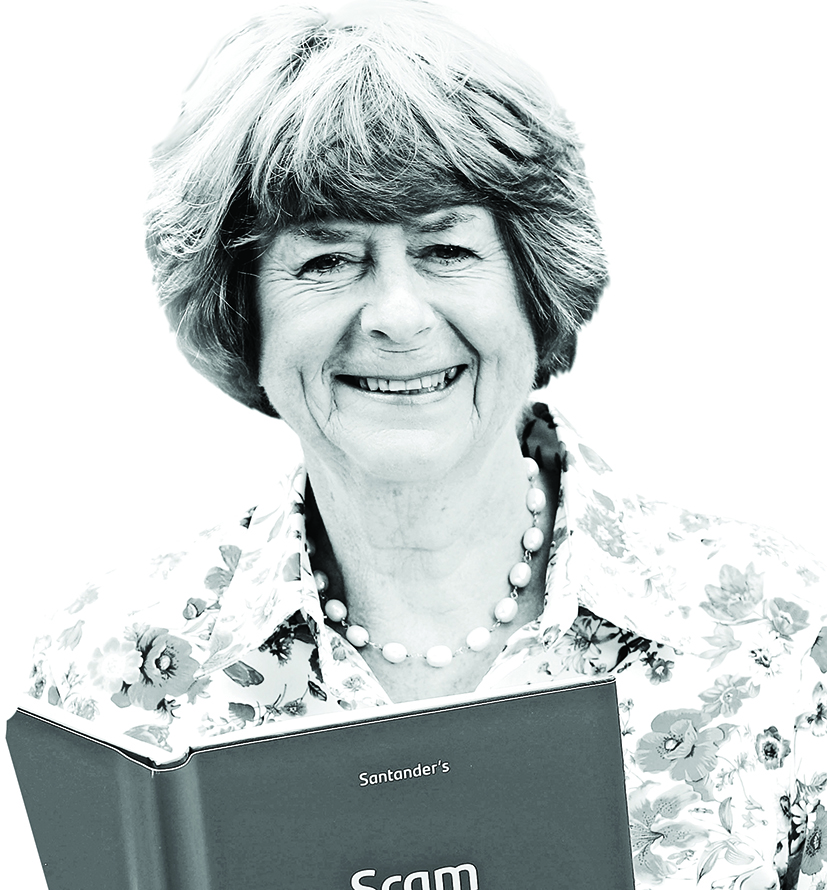 The spoken word renaissance has also benefitted older names such as Pam Ayres (pictured, right), a poet and comedian, who appeared on shows such as Opportunity Knocks and The Two Ronnies in the 1970s.

Ayres returned to the spotlight when she wrote a tongue-in-cheek poem inspired by the coronavirus pandemic that was shared on Twitter.

Now, she is starring in Santander’s “Scam sonnets” campaign, which aims to highlight the issue of investment fraud among older Brits.

“They are thieving people’s savings, taking everything they’ve got, especially the older folk who’ve got a pension pot,” Ayres rhymes in
a sobering departure from her familiar light-hearted quips.

She admits: “I didn’t set out to write one of the masterpieces of my career. It’s a different kind of task – to produce something workmanlike that does the job and that you feel pleased with.”

Well versed in refusing commissions that she “wouldn’t touch with a bargepole”, Ayres claims that she was moved to take part in Santander’s campaign as a respected voice among an older demographic.

“A lot of my fans are older people and they sort of trust me, and so I wouldn’t want to advertise something that I wasn’t wholeheartedly behind, because people would believe me,” Ayres, who has also done ads for McCain and British Meat, says.

On the other side of the same coin, Cooper Clarke hails his work, Nine Line Valentine, for black-spiced rum brand Kraken, released ahead of Valentine’s Day this year, as “a superb romantic poem”, which wouldn’t exist without a brief.

“I wouldn’t have written the motherfucker if it hadn’t been for the commission, someone offering me thousands of pounds,” he declares. “The title alone, I should be thanking them.”

Whether it’s standing in as the foil to the Honey Monster or plugging Coca-Cola, Cooper Clarke maintains that advertising and spoken word have had a symbiotic relationship for decades, moving past the velvet ditch of purpose-led poetry to create art at its best.

“Selling your morality – what kind of nonsense is that? I’m sure William Hogarth would’ve done gin ads if the price was right,” he declares. “It’s like Andy Warhol never existed.”

Cooper Clarke continues: “If you offered George the Poet, or anybody in their right mind, a good purse to apply their skills to writing a memorable advertising jingle – who wouldn’t? I’d do it for fun.”

A sucker for small-screen entertainment, the punk-poet laureate claims he genuinely looks forward to seeing ads such as Moneysupermarket’s “Money calm bull” and Snoop Dogg’s bass-heavy verses for Just Eat – both of which launched during lockdown, although they were planned before Covid-19.

Cooper Clarke admits he has found some aspects of lockdown difficult personally but he has loved the joyful nature of the Just Eat spot, which stars Snoop, rapping about the joys of food delivery.

“It’s the gold standard – that motherfucker,” he says of Snoop’s effort. “He’s gone right up in my estimations. From one guy to another, Snoop, mazel tov.”

With an endorsement like that, expect more brands to embrace the spoken word.

There was a young man from Greece... poets through the ages 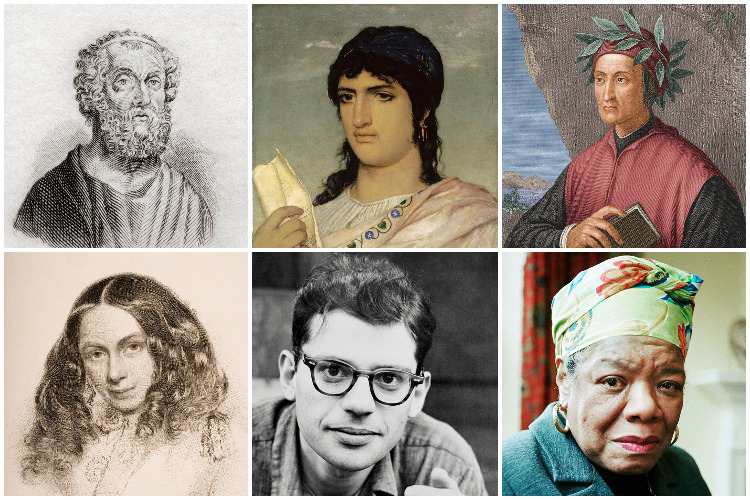 Homer Somewhere between 12th and 8th centuries BC

Presumed author of the Iliad and the Odyssey, Homer, as an oral poet, was one of the first known spoken word performers.

Once described by an ancient Greek theologian as "a sex-crazed whore who sings of her own wantonness", Sappho has grown to become a queer icon for her sensual descriptions of women.

William "The Troubadour" wrote about love, sex and politics, and was excommunicated by the Catholic church twice for a string of conquest-based "misdemeanours".

Poet, politician and soldier, Dante brought readers through the nine circles of hell in Inferno. He was excommunicated from Florence for political corruption but eventually pardoned by the city in 2008.

The "father of English poetry", Chaucer is best known for his rich characters in The Canterbury Tales, which are written in Middle English vernacular.

Shakespeare's plays and sonnets have been an inspiration to writers and performers for four centuries.

Born a princess in Rajasthan, India, Mirabai was known to enter a trance while singing bhajans (hymns) – her family reportedly tried to kill her twice for her religious ties. Mirabai's works are still performed today.

Barrett Browning's work on social injustices has had more posthumous impact than that of her husband, fellow writer Robert Browning. She was the first woman to be considered for poet laureate.

Angelou started out as a dancer and was a civil-rights activist, composer and Hollywood's first female black director. Her poetic work earned her the Presidential Medal of Freedom in 2010.

Regarded as "queen of the Instapoets", Kaur wrote and illustrated her self-published book Milk and Honey at the age of 21. It has since sold more than eight million copies.