John Lewis has altered its ad strategy for music recognition app Shazam to ensure its banner ad will not appear against tracks used in the Marks & Spencer and Debenhams Christmas campaigns.

The company had taken out a banner ad on Shazam plugging its 'Monty’s Christmas' app for children, as part of its broader multi-channel Christmas campaign.

The ad was set to appear against any popular tracks on Shazam, and showed the John Lewis penguin, Monty, and his paramour Mabel. The banner read,"Give someone the Christmas they’ve been dreaming of" followed by a call to action to download the Monty’s Christmas app for children. 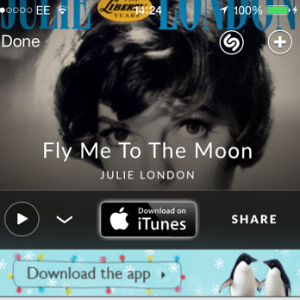 But the ad started popping up against music used in rival Christmas ads that began airing this week.

Users spotted the 'Monty’s Christmas' ad appearing against Julie London’s 'Fly Me to the Moon', used by M&S, and Paul McCartney and the Frog Chorus’s 'We all Stand Together', used by Debenhams (pictured right). It also appears against the track used in John Lewis’ own ad, Tom Odell’s 'Real Love'.

But both Shazam and Manning Gottlieb OMD, John Lewis’ agency, said this was a coincidence and said the ads would no longer appear against rivals’ tracks.

Marketing understands that there was no intention to target rival retailers, and that the John Lewis ads simply started appearing against the tracks as they rose in popularity.

The M&S ad has been "Shazamed" approximately 2,500 times since its release, according to Shazam stats this week. John Lewis itself has seen more than 20,000 Shazams.

Debenhams marries celebrity and personalisation in 'Found It' Christmas campaign

Back in fashion: M&S delivers first rise in clothing sales in four years

Sainsbury's marketing boss on WWI Christmas ad: We wanted to bring it to life sensitively

Watch: M&S adds 'magic and sparkle' to its Christmas TV ad with #followthefairies