The brand is ditching the tropes of purpose-driven advertising with a relatable character called Lesley.

Karma Cola, the challenger soft drink brand, is turning purpose-driven advertising on its head with a campaign aimed at adults who are a little bit bad.

The maker of Fairtrade and organic fizzy drinks is taking over Shoreditch for four weeks starting today (17 June), with comic strip-style ads that target the creative community. It is the first work for the brand by Wonderhood Studios, the start-up founded last year by former Channel 4 boss David Abraham.

This is also Karma’s first significant above-the-line campaign, so co-founder and director Simon Coley said it is "important that we don’t advertise in a typical way".

While purpose is built into the brand, which has a sustainable business model and a foundation that benefits growers in West Africa, Coley and Wonderhood said they were keen to avoid the tropes of do-good marketing.

"Purpose is the flavour of the month, but it’s the veneer of purpose. How do you cut through?" Aidan McClure, chief creative officer of Wonderhood, said.

The campaign is called "Good drinks for bad adults", and it speaks to people who have the best intentions but sometimes fall short when life gets in the way. Wonderhood calls this group "latte activists" – do-gooders who may sign online petitions, shop organic or carry tote bags and reusable coffee cups, but do not always follow through on their ideals.

Each ad presents a comic strip in which a character called Lesley, who represents a "bad adult", finds itself in a messy but relatable situation, such as failing to go on a morning run. 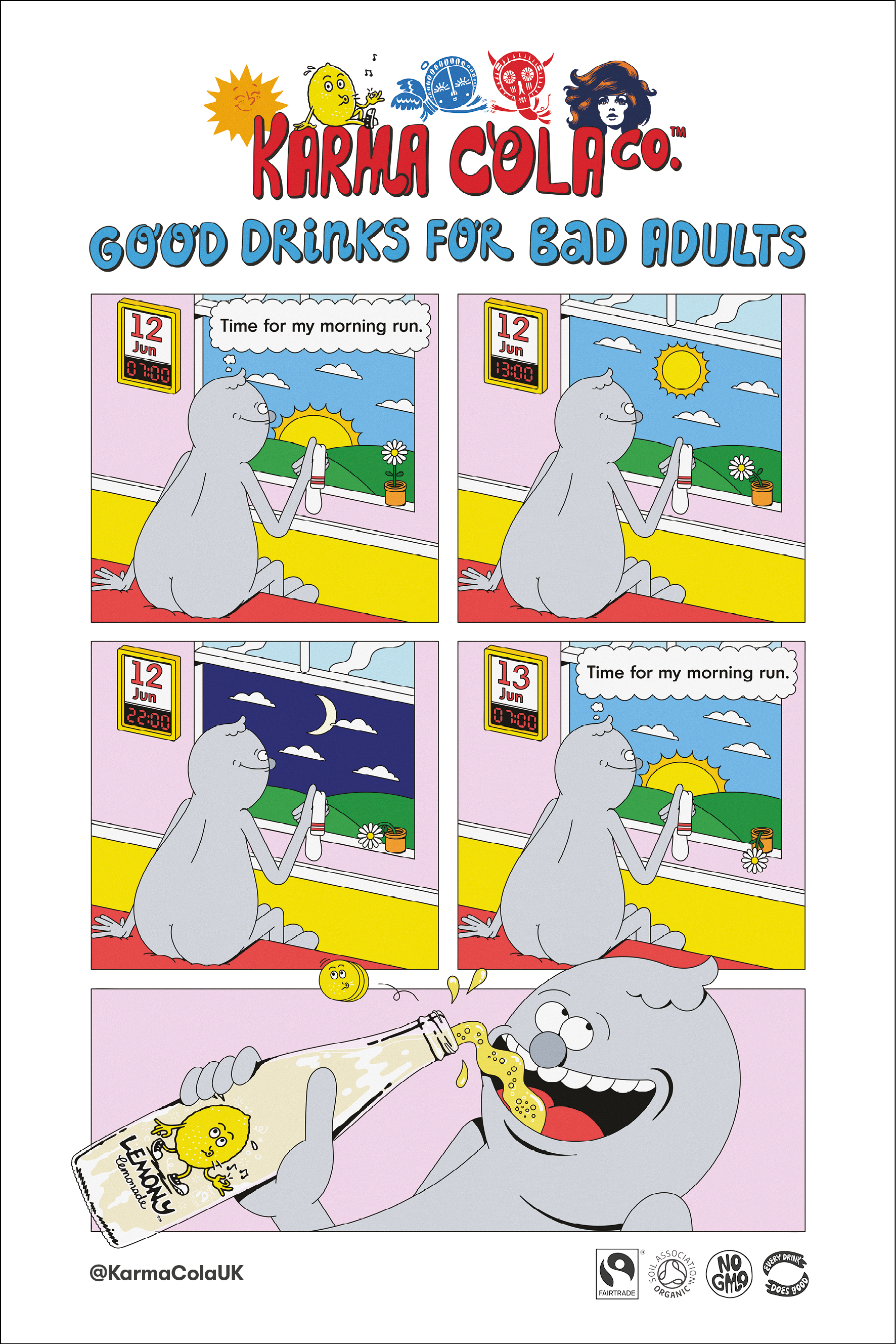 The work will run across outdoor, print and social media. It was created by Stacey Bird, Jack Croft, Ads DeChaud and Phil Le Brun, and illustrated by James Papper through Blinkink.

What goes around comes around

Coley, a Kiwi who previously set up the Fairtrade banana business All Trade Organics, founded Karma Cola with his business partners in New Zealand in 2012. The flagship product is a natural cola drink made from real kola nuts, and the company works directly with farmers in Sierra Leone to help rebuild their crops and communities.

The brand’s name comes from the idea that "consumers and producers interact in a virtuous circle," Coley said. The business expanded to the UK in 2014, launching at the London Coffee Festival and then independent cafes and restaurants such as Honest Burgers.

But fast forward to today, and "all the goodwill we’ve created from the product only gets us so far," Coley said: "If we really want this to work, we have to sell a lot more drinks. We need scale to prove that this is possible, to balance doing good with making a profit."

Karma previously made a short documentary and some content about the foundation’s work, but it brought on Wonderhood earlier this year for its advertising debut. With a restricted media budget, the team decided to concentrate its efforts only in Shoreditch, the stomping grounds of creative people who are likely to be attracted to the brand’s ethos.

Coley is a self-proclaimed "recovering creative" who previously worked as a designer and marketer. Therefore design is at the heart of Karma’s brand: "It’s very hard to be noticed without making something that people will want to pick up," he said.

The package design draws on West African folklore as well as cola motifs of red and blue. It features different characters for each product, such as Gingerella for the ginger ale and Lemony for the lemonade.

In making the ad campaign, one challenge Wonderhood faced was bringing this family of characters and drinks together. That is how the idea for a comic strip was born. "We needed to create a way for the characters to live together," Stacey Bird, a senior creative at Wonderhood, explained. 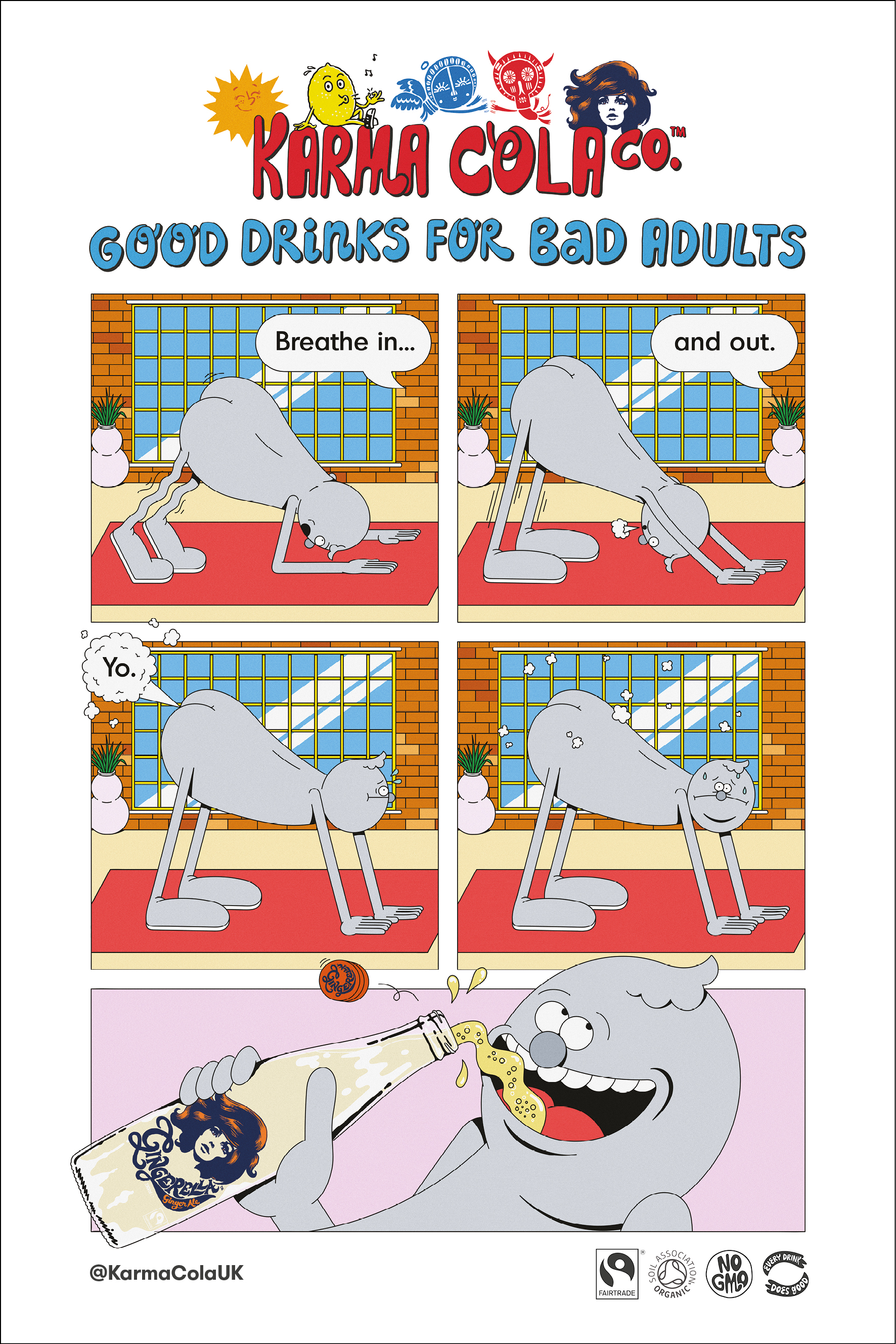 What does a "bad" adult look like? Wonderhood knew the character needed to be "sexless – a vessel you could project your own foibles on and who represents you at your most vulnerable", McClure said.

The agency hired Papper, an illustrator with a knack for infusing his characters with humour. He developed Lesley, a misshapen, grey being who is neither man nor woman, and who happens to have a quiff and polished bottom. 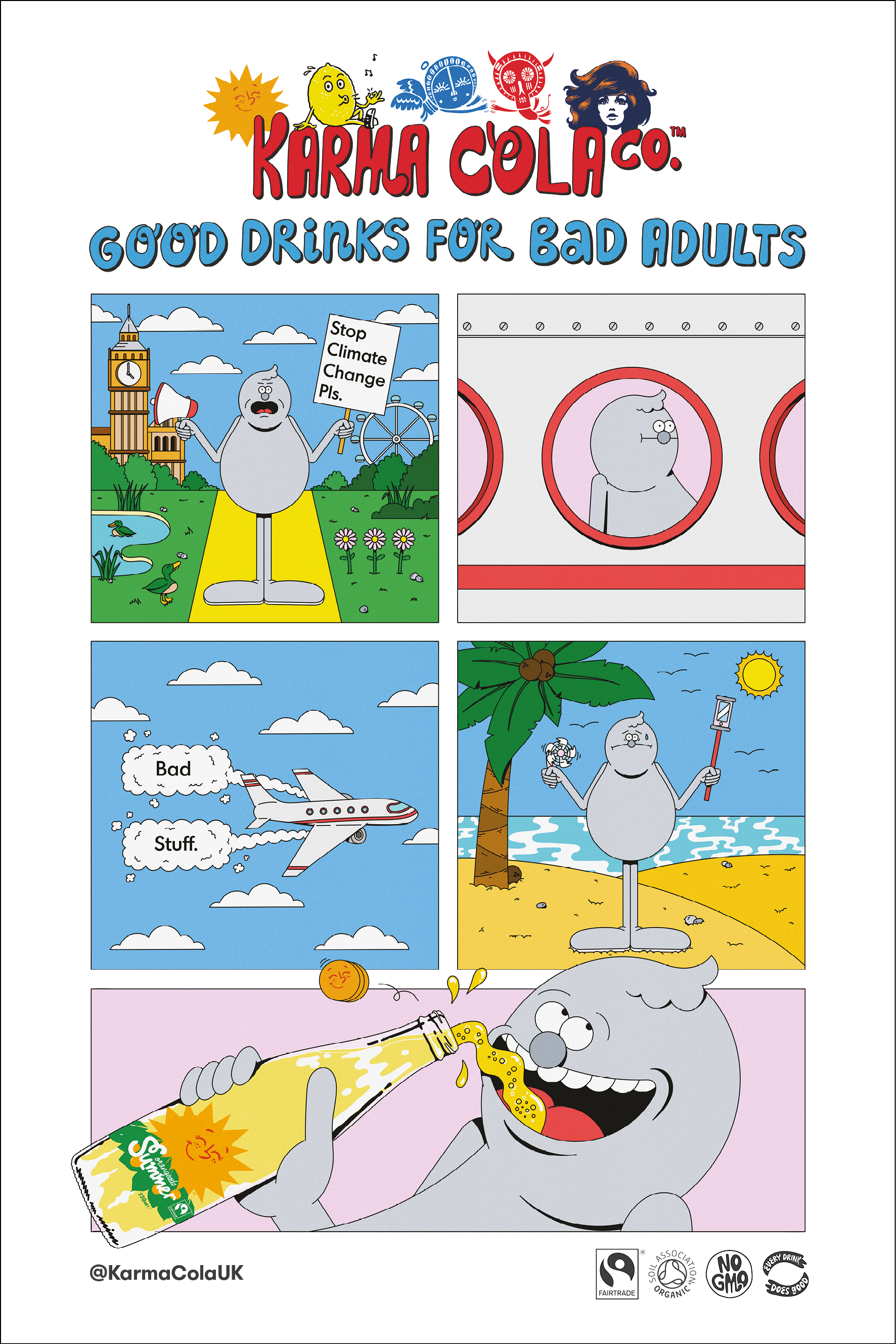 On more than 50 outdoor sites, including Box Park and the Old Street roundabout in Shoreditch, Lesley will confront other bad adults with his or her own amusing situations. Lesley misses a morning workout, passes gas during a yoga class, takes a long-haul flight despite protesting climate change, and complains of gentrification while visiting Shoreditch House (the latter ad will be placed directly outside the private members club). 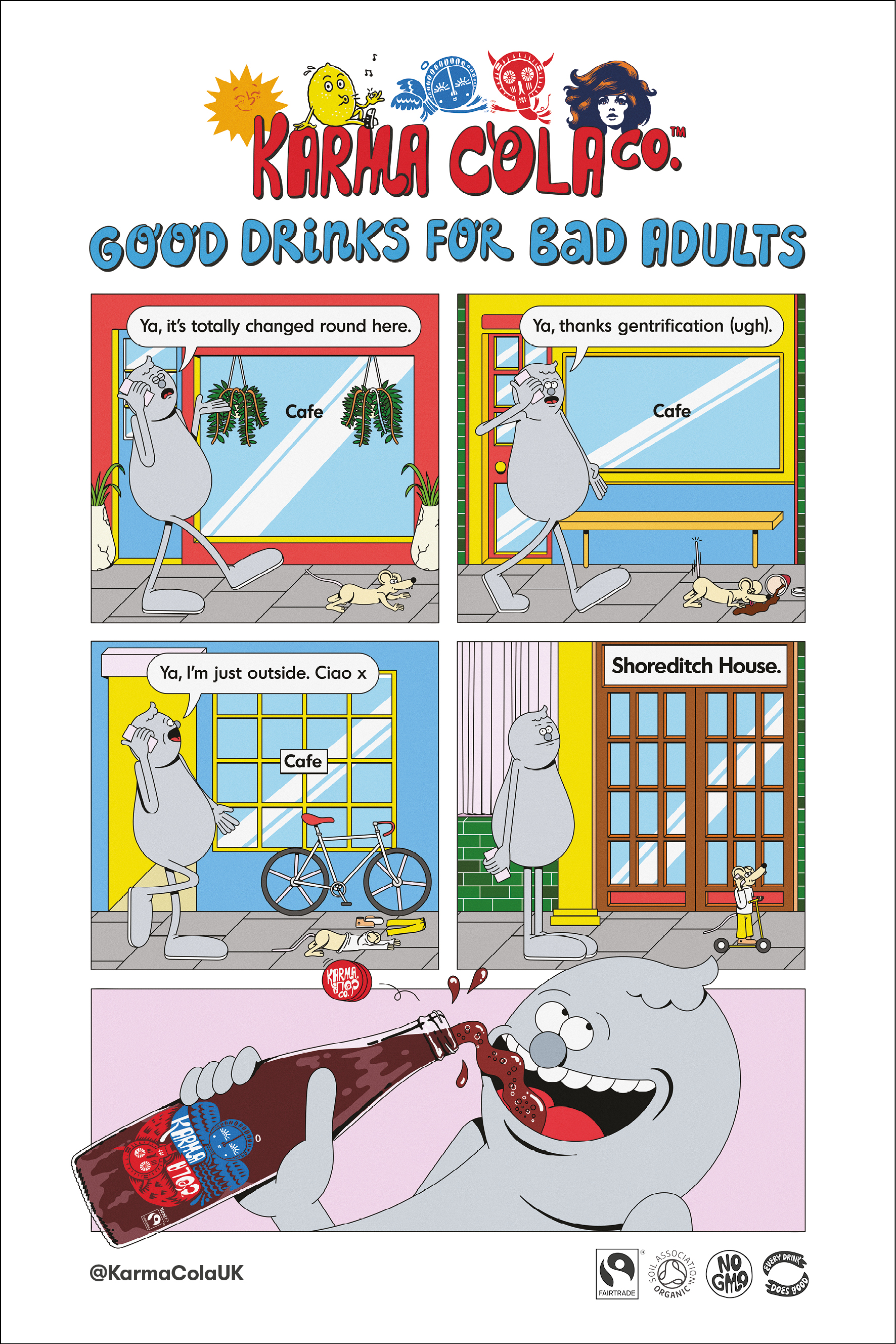 Bird said the ads are meant to serve as entertainment, rather than typical posters that merely "interrupt" people: "Out-of-home ads are forced on people, so they deserve a good idea and craft," she said. Wonderhood’s long-term ambition is to bring Lesley to life through an animated series.

If successful, Lesley could become a permanent fixture of Karma’s cast of characters. The brand hopes that bad adults everywhere will adopt Lesley as one of their own.

"We’re not preaching to them," Coley said. "If we’re going to be public, we have to entertain people and do things differently."

Pick of the Week: Comic Relief's film is a beautiful reflection on its purpose

Hold my beer. I'm going to make the case for data