The ad was inspired by Transport for London's (TfL) own warning posters, and responds to the latest rise in TfL fares introduced on 3 January, which Livingstone claims have increased above the level of inflation.

It  features a figures standing against a bright yellow background being pickpocketed by a portly figure with spiky and unkempt hair, designed to resemble Boris Johnson. The ad reads, "Beware: pickpocket operating on public transport".

It is running in the London Evening Standard newspaper throughout this month and will be followed by further efforts in the run-up to the mayoral election on 3 May.

A spokesperson for Ken Livingstone said: "Through innovative campaigning we have put the issue of fares at the heart of the mayoral election. We've used texting, emails, Facebook and now online and print advertising to reach well over a million Londoners with our Fare Deal campaign.

The Labour attack on Johnson comes as TfL has banned Wonga.com and other payday loan companies from signing major corporate sponsorships the transport company, following the highly criticised deal with Wonga for New Year's Eve 2010. 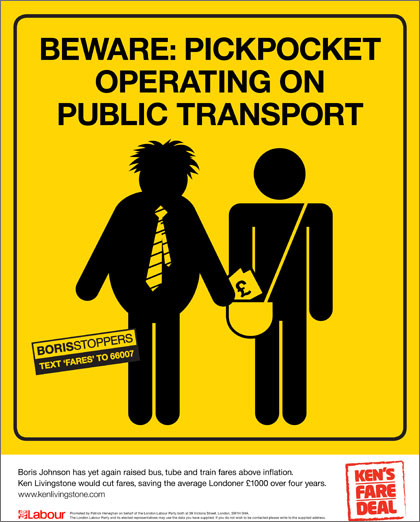