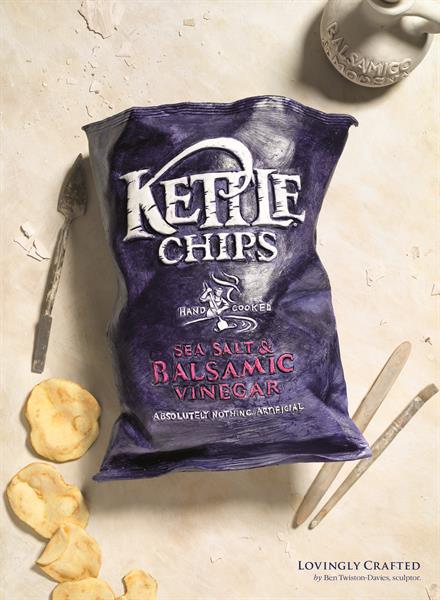 Kettle Chips has enlisted sculptors to recreate its crisp packets out of different materials for a new print campaign. The ads, created by 101, are running in newspapers such as The Guardian and The Times, as well as lifestyle magazines including Delicious and Olive. The activity continues the association between Kettle Chips and craftsmanship that began with a TV spot in November 2013, which was also created by 101. The campaign, which will run for three months, comprises three executions: one shows a Sea Salt & Balsamic Vinegar packet made from ceramic materials, another contains a Lime & Black Pepper packet blown from glass and the third features a Mature Cheddar & Red Onion packet carved out of wood. The work was created by Tom Donald, Misha Newby, Jack Willoughby and Serhan Asim, and shot by Alexander Kent. Media was handled by Carat.

Klarna "Clothes love all" by Motel

PlayStation "PS5 launch - Play has no limits" by Adam & Eve/DDB