When KFC suffered supply issues early this year, negative sentiment and media coverage was rife, and the brand was in crisis. However, the fast-food chain and its agency, Mother, dragged victory from the jaws of defeat

It was the calamity that had the nation choking on its chicken. When KFC’s "#ChickenCrisis" became international news in February 2018, after the almost total collapse of its UK operations, customers were left with a very bitter taste.

Yet its response, in the form of an apology ad rearranging the letters of its name to spell out "FCK" on a chicken bucket, was a stroke of genius which transformed marketing mayhem into a brand breakthrough – and rewrote the manual for corporate crisis management.

Why did the chicken…

The origins of the episode go back to October 2017, when the fast-food chain ended its relationship with food-delivery specialist Bidvest Logistics in favour of a contract with Quick Service Logistics and Deutsche Post-owned DHL, the latter best known for its home-delivery services.

The hubris on display at the time of the announcement makes for painful reading: KFC and DHL promised collectively to "revolutionise" the UK food-service supply chain with an unprecedented focus on "innovation, quality and reliability". Yet, within weeks of taking over delivery management, the system was creaking, as DHL struggled to fulfil a just-in-time order culture among franchisees across the UK from its single operations centre in Rugby.

The chicken wasn’t even leaving the depot, let alone crossing the road

By 16 February, KFC restaurants were running out of key ingredients, including chicken. The situation deteriorated, and, early the following week, hundreds of restaurants were forced to close. By this point, global news outlets were covering the story, screening footage of angry customers bemoaning that they were being forced to visit Burger King instead. The local constabulary in London’s Tower Hamlets was even forced to send a tweet reminding citizens that the chicken shortage was "not a police matter".

According to data from social-media monitoring service Brandwatch, on 21 February alone there were 53,000 mentions of KFC running out of chicken, alongside hashtags such as "#ChickenCrisis" and "KFCCrisis". Speaking to Campaign in June, Meghan Farren, KFC’s chief marketing officer for the UK and Ireland, painted a bleak picture of the brand’s predicament in those dark winter days: "At the time, our business was, to be honest, on its knees. We have 26,000 team members across the UK and Ireland, and many of them were taking abuse from customers, day in and day out. They were being berated for not having salt, for not having ketchup sachets, for running out of hot wings.

With 900 restaurants closed, and more damage to the brand with each passing hour, KFC turned to its creative agency Mother in search of salvation.

KFC set out two objectives: a mass-scale public apology to mitigate for the disruption caused to diners and franchisees alike, and a clear and transparent explanation of what was being done to fix the issue.

Mother was still relatively new to the world of fried chicken, having won the brand’s creative account only 11 months before from 15-year incumbent Bartle Bogle Hegarty.

However, a deep-dive into its business allowed the agency to identify a vital insight, namely that nearly three-quarters (71%) of the UK population visits KFC at least once a year, and that a quarter (24%) eats in its outlets on a weekly or monthly basis. With the scale of its audience so vast, it required an efficient solution to reach them in one hit.

Working with UK media agency Blue 449, KFC decided that print media would best achieve its goals, given its ability to reach a "sizeable minority" of UK consumers, and because it perceived that the medium benefits from higher trust metrics than social media. Two newspapers – The Sun and Metro – were selected to deliver a combined readership of nearly six million.

The creative execution was of even greater importance. The UK general public are no strangers to what they perceive as empty, corporate apologies. To cut through, KFC would have to turn the traditional crisis management playbook on its head, eschewing the usual executive apology on TV, and avoiding the temptation to blame its new delivery partner DHL.

Instead, guided by the "three Hs" of "humility, humour and honesty", it settled on another three-letter word to share the "truth" in a bold and down-to-earth manner: "FCK". The near-expletive anagram of KFC’s brand name emblazoned on the side of a chicken bucket seized attention, before offering an apology written in everyday, conversational language.

"A chicken restaurant without any chicken. It’s not ideal," joked the ad. "It’s been a hell of a week, but we’re making progress, and every day more and more fresh chicken is being delivered to our restaurants."

The ad ended by directing consumers to a dedicated microsite, kfc.co.uk/crossed-the-road, again using humour as a means of disarming customer frustration. 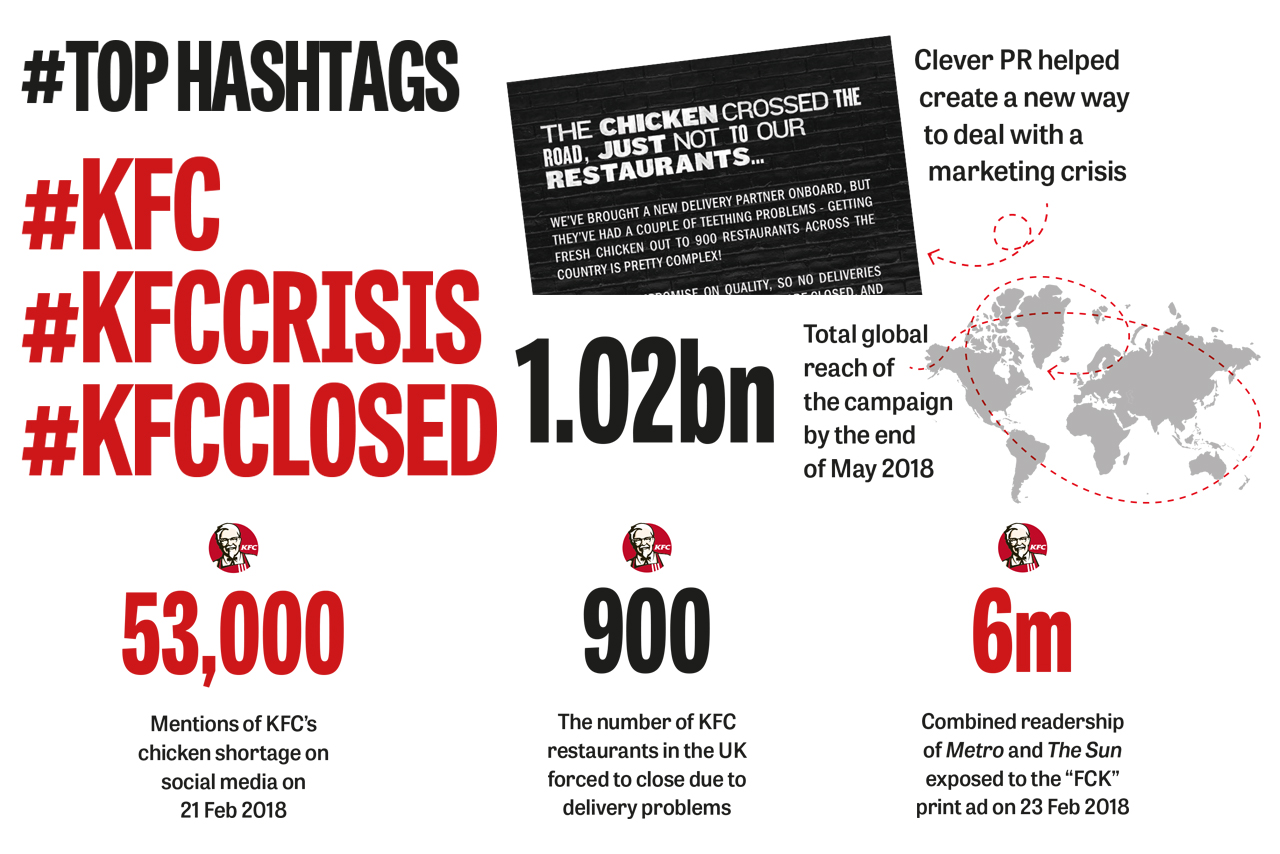 The ad, which appeared in just those two aforementioned UK newspapers on Friday 23 February, prompted more than 700 press articles and TV discussions, delivering a combined audience of 797 million around the world. A further 219 million social-media users were exposed to the branded "FCK" image, meaning that, within three months, the campaign had generated a total earned reach of more than one billion. All from a single press ad.

In the weeks following the campaign launch, KFC steadily restored operations to normal, meaning restaurants could re-open and offer a full menu. DHL was stripped of some of its duties, with deliveries to 350 outlets in northern England and Scotland to be handled once more by Bidvest Logistics.

Yet evidence suggests that it was not simply a case of "back to normal" for KFC. In fact, it appears that the ad has helped the chain to emerge from its ordeal without any lasting brand damage whatsoever.

According to data from YouGov BrandIndex, KFC’s response to the events made an impact on the UK public, with 29% of people noticing something about the fast-food outlet at that time, up from 7% before the problems began.

Its brand impression score among consumers dropped by nine points at the time of the shortage, from -2 to -12, but has since returned to -1, which Amelia Brophy, head of brands at YouGov, said underlines the success of its brand recovery.

Importantly, Brophy added, the brand is "very resilient" among people who would consider eating at KFC. Among this group, KFC’s impression score was barely troubled by the shortage crisis, dropping only by a couple of points at the time. Its score of 57 is actually one point higher than it was pre-crisis.

It also helped to heal potentially harmful internal divisions within the company, Farren claimed: "After we ran the ad, I think our team members felt supported and valued, and that their customers understood that it wasn’t their fault, and that the abuse shouldn’t be directed at them, but rather at the brand. That is what we wanted [to do], to support our teams." 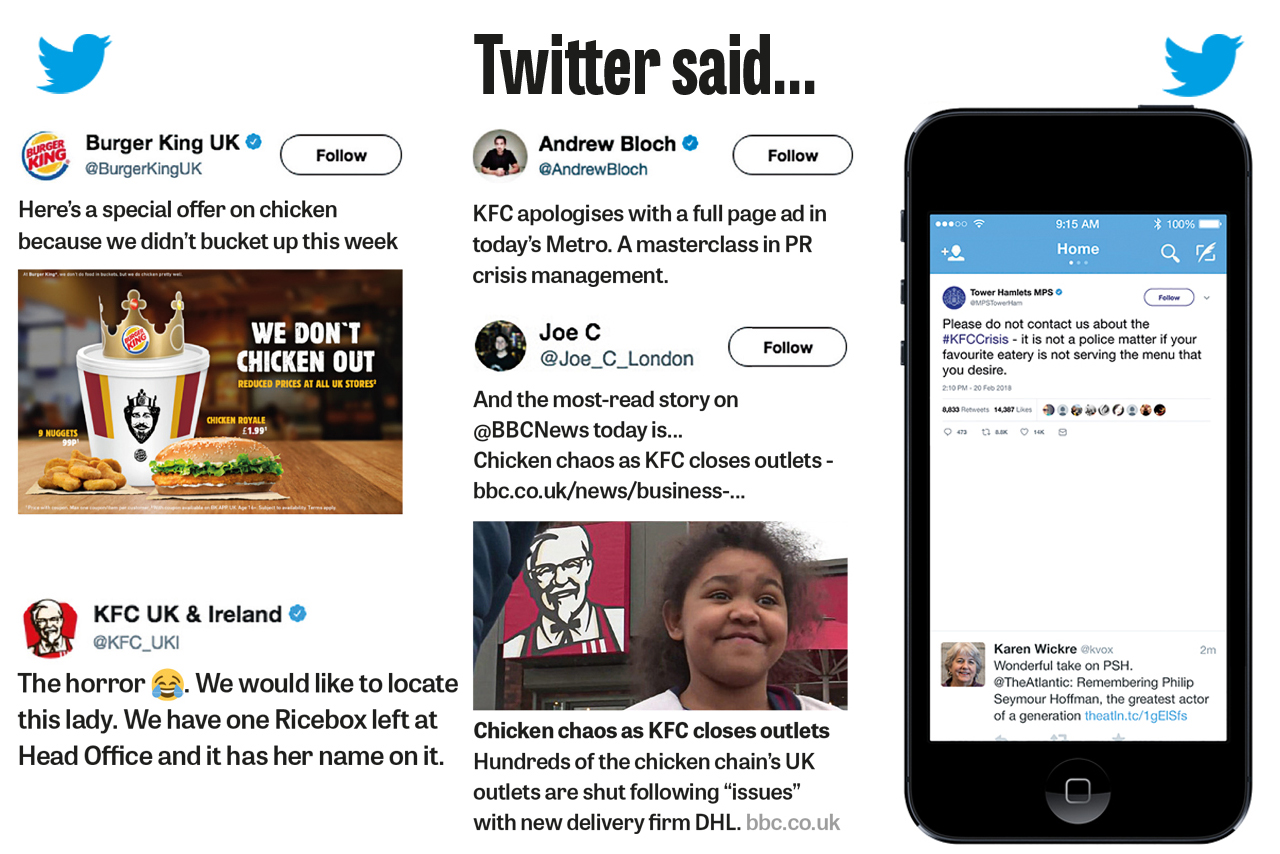 What had started life as a damage limitation exercise was soon being heralded as one of the greatest examples of corporate crisis management. "FCK" picked up one silver and three gold Lions in Cannes, including in the Print & Publishing category, and in September was awarded the Grand Prix for Campaign of the Year at the Marketing New Thinking Awards 2018.

Farren insisted the subsequent praise and success came as a complete surprise, and has served to underline the importance of treating brands as one would treat a person.

"We didn’t set out to do something huge that would be a lesson to people. What I have learned is that allowing people to empathise with you can really go a long way to rebuilding trust and to forgiveness, and that is essentially what we did," Farren said.

"We allowed people to empathise with us by being human, to see how we were feeling. Brands are like people; they are run by human beings. If you want people to connect with other people, you are authentic and open and honest and humble. We just acted like that."

Speaking to Campaign after picking up its Cannes Lions haul, Hermeti Balarin, partner at Mother, concurred: "It feels wonderful to win an award, but that was never the point of this whole thing. Back in the day when we ran this, the last thing we were thinking about was advertising awards.

"We were very deep into the crisis, thinking about apologising to people, and making up for letting so many people down. It’s very nice to look back in hindsight, but the real moment was back then."

Rarely can so complex a business problem have been solved by so simple a solution. Very FCKing clever, indeed.