KFC didn't start the "clean-eating" conversation online, but with BBH's help its Dirty Louisiana campaign certainly seemed to help end it. The work was highly commended in the Social Storytelling category at Campaign's Marketing New Thinking Awards 2017, held in association with Sky Media.

BBH trolled the nation by creating a fake food blogger, with 40,000 fake followers, to launch a fake burger in collaboration with KFC.

This was a way for the brand to ridicule the ‘clean eating’ trend and consequently position its Dirty Louisiana burger as a joyful antidote to this increasingly joyless movement. The activity got more than 350,000 people talking about how food should be enjoyed, not feared.

BBH wanted to do something that would provoke the core target audience out of the usual indifference they have to most forms of online marketing. Through the use of data it found an online phenomenon – "clean eating" – and uncovered an insight within that phenomenon: it is increasingly seen as joyless. With that in mind, KFC could could join in and disrupt a highly relevant conversation its target audience was having.

The second part of the strategy was based on immersion. BBH created not only a fake burger, but also a fake food blogger: Figgy Poppleton-Rice. It created a presence for her on social platforms, as well as a fake book, and posted large amounts of content before the campaign started. This level of detail helped further the conversation and resulted in publications such as Marie Clare reaching out to ‘her’ for interviews. 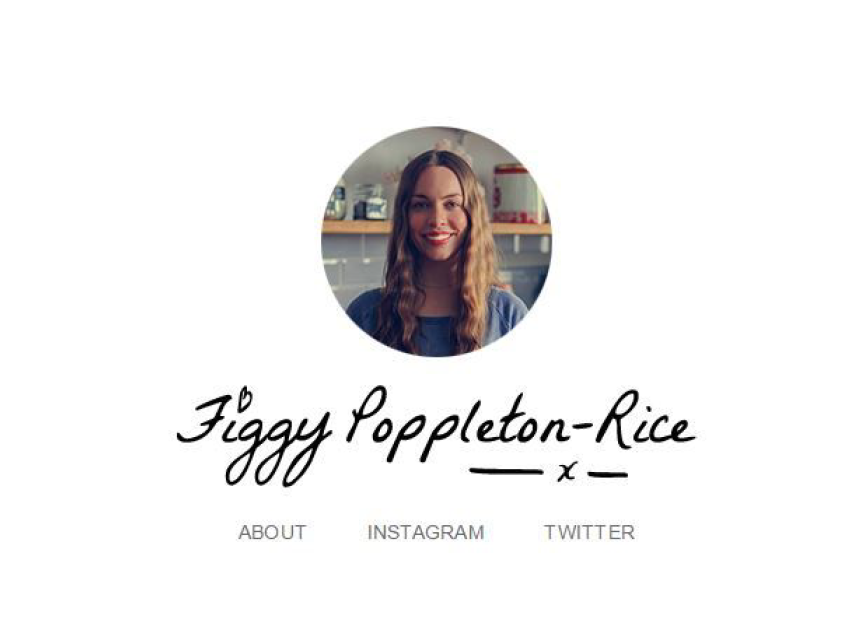 The value of comments

The jargon surrounding digital KPIs has become so confusing and focused on media efficiency over effectiveness that it is fundamentally counterintuitive. Create work that creates fame and all the other metrics will follow. Commenting is now the primary share mechanic, thanks to @mentioning friends, so BBH felt this was a better indicator of work that people like to like.

The campaign generated more than 350,000 comments, helping it to organically reach 28 million people, giving it a equivalent media value of £823,000. Crucially, the burger beat its sales target by 39%, making it one of KFC’s best-selling burgers of the past five years.

The brief was simple: generate mass awareness and demand for this new product by making ‘dirty’ good. While the task was simple, the challenges were significant, for three reasons:

Finally, BBH was keen to challenge the indifference much of the audience had displayed towards previous social campaigns by focusing on a sole KPI, talkability. To do this it had to create a campaign that was non-consensual, peer-to-peer and grounded in social conversations that were already taking place.

To do this, it turned to the data. 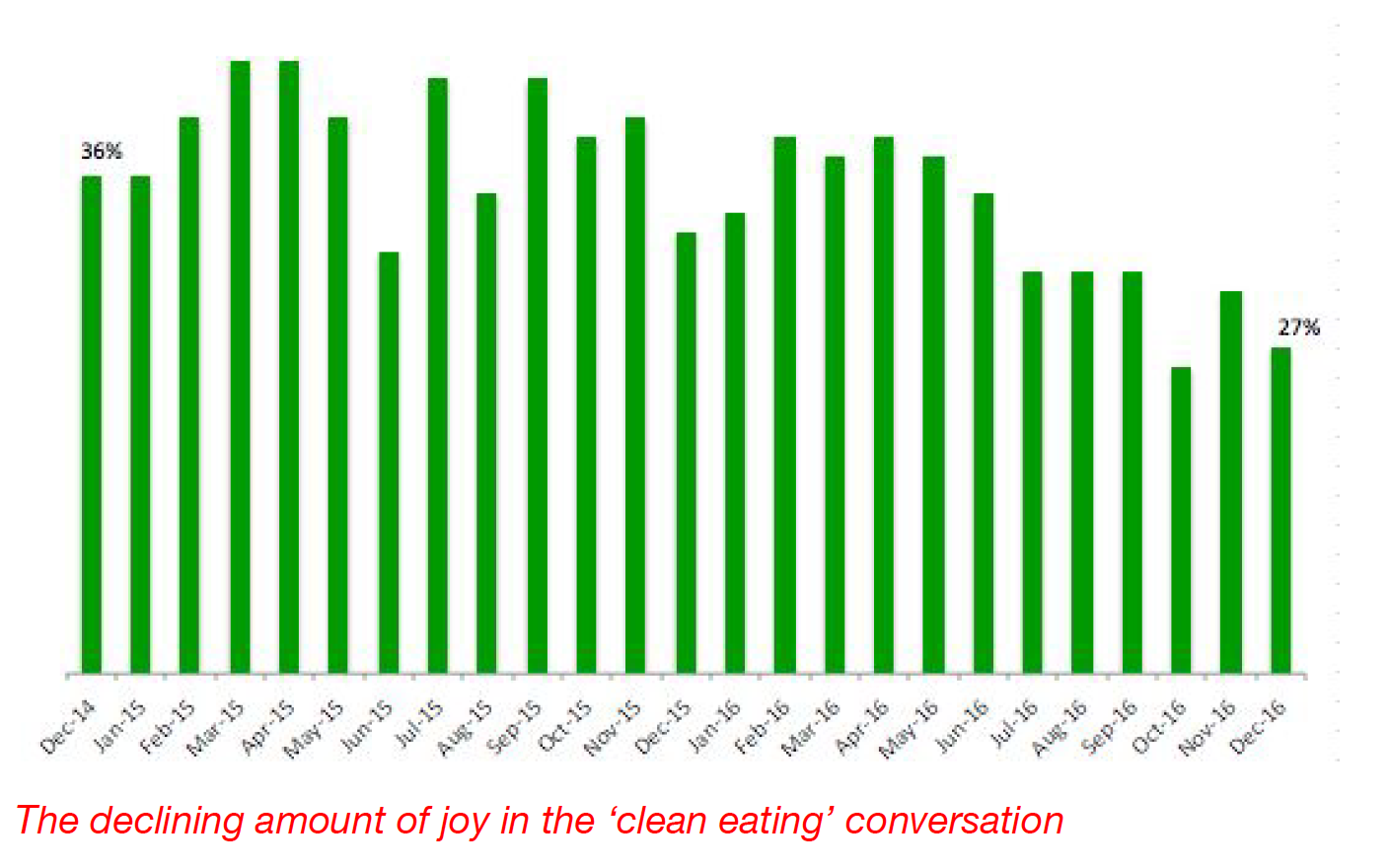 The agency started by creating a KFC Crave Index. This looks at the total number of people ‘craving’ KFC on social media and divides it by the total branded conversation. The KFC Crave Index was showed a surge in the early months of 2017:

Almost 7% of the entire KFC conversation revolved around craving KFC. On further investigation, it became clear that people who were talking about ‘clean eating’ were the primary drivers.

A quick look at the Amazon Best Selling books list, showed that eight of the top 10 bestselling books in January were to do with ‘clean’ or healthy eating. It was clear, therefore, that "clean eating" was a large, UK-wide trend. The problem was: how could KFC play a role in cutting through it?

When BBH analysed all UK mentions of "clean eating", it was clear that the level of ‘joy’ monitored in the conversation was declining dramatically:

A backlash to ‘clean eating’ was clearly brewing and taking the form of criticising its joylessness. The Instagram high priestesses of the trend were taking flak for telling fans to cut out sugar, avoid gluten, cut down on carbs, salt… Thus the role for creativity became clear: challenge the joylessness of "clean eating" with the indulgent taste of the Dirty Louisiana. 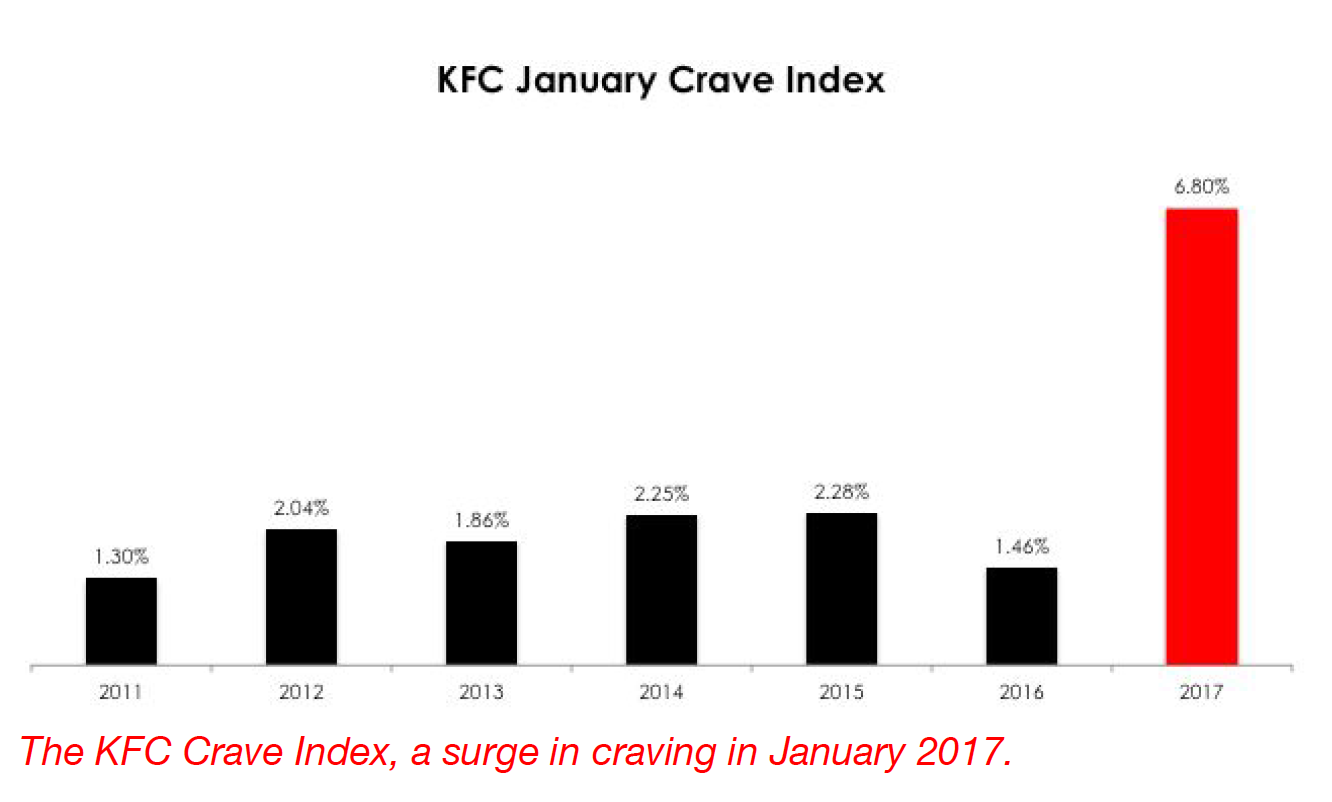 The best way for KFC to challenge and highlight the joylessness of the "clean eating" movement was to join it.

The first step was to create a "clean-eating" influencer named Figgy Poppleton-Rice. Figgy would be KFC’s partner in launching this "clean-eating burger":

BBH gave her a social presence on Instagram, Twitter and a blog. In keeping with other online influencers, it decided to invest £120 to increase her social credibility – garnering 40,000 followers across these channels.

Leading up to and throughout the campaign, Figgy would post endless ‘clean’ recipes:

She also offered lots of dubious lifestyle tips and, in true Instagrammer-food blogger style, she had her own recipe book – "A Feast With Figgy".

After Figgy had been established, BBH turned its attention to the provocation. 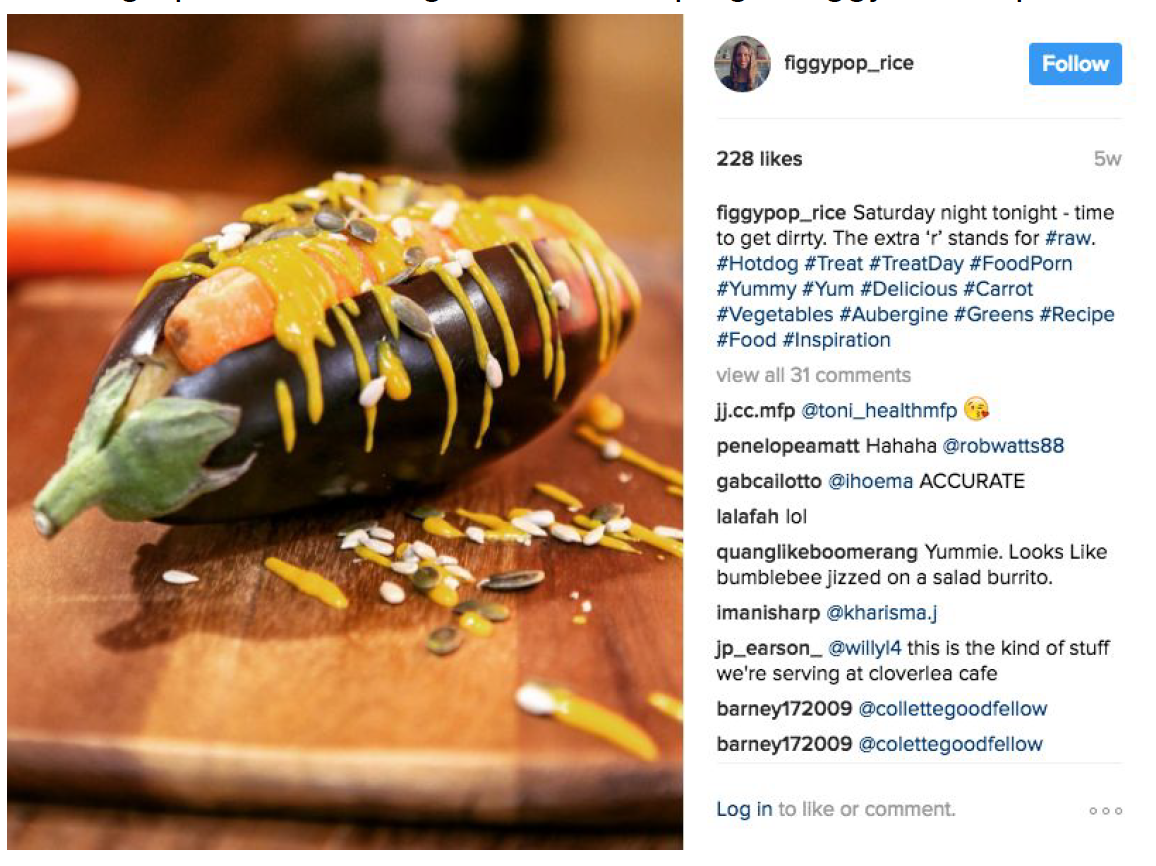 The cornerstone to this campaign was shock content. The "clean-eating burger" would soon become one of the most shocking and talked-about pieces of culinary innovation ever to come out of KFC’s kitchens: a cauliflower bun, spiralised chicken, almond yogurt, ice-cube relish and other goodies.

Within 48 hours, the single image reached more than 12 million unique people in the UK, with just £5,000 media spend.

And it got people talking; more than 160,000 people had expressed their disgust about KFC’s latest burger.

Overnight, Figgy Poppleton-Rice became a superstar, accounting for 21% of all Google searches to do with "clean eating".

Five days after the provocation BBH published the campaign’s hero asset on Facebook, Twitter and YouTube – a two-minute video showing Figgy creating her horrendous-looking ‘clean burger’. The final reveal is a massive poster of the actual burger, the Dirty Louisiana, that comes down and smashes the Figgy’s burger.

It soon became KFC’s most watched video ever, quickly racking up more than 10 million views, and reached more than one-third of the UK. Furthermore, over 250,000 people commented on the Facebook video alone.

The video received significant press coverage with news outlets all over the world. 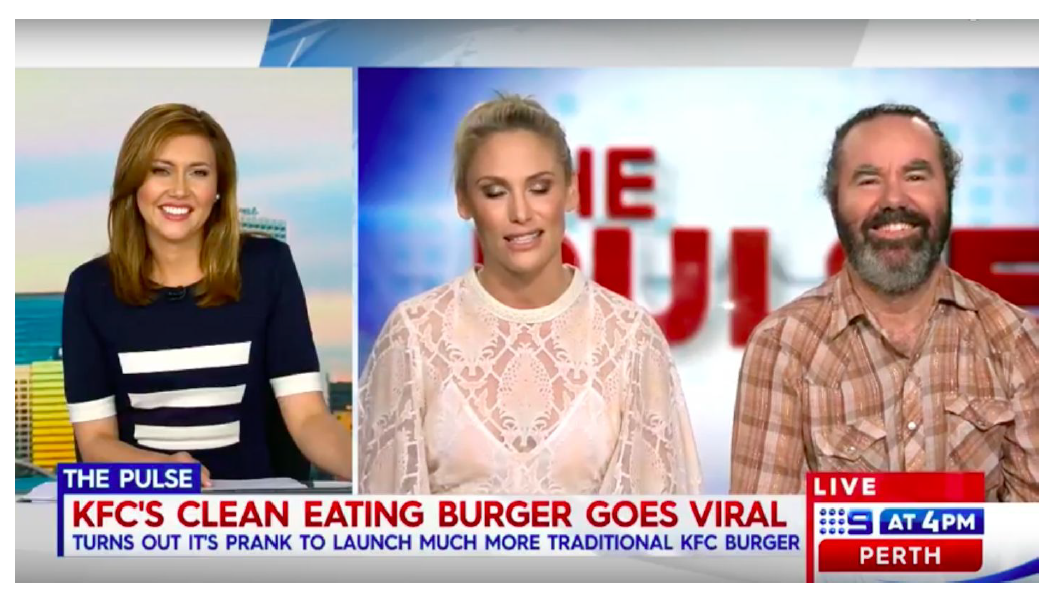 Performance: the proof is in the ‘Figgy’ pudding

Not only did KFC own the conversation, but it apparently killed it. While it can't claim causation, several key bloggers – even the arch-priestess of ‘clean eating’, Deliciously Ella – have started distancing themselves from the trend.

Deadline extension: you now have until 6 June to enter Campaign's New Thinking Awards

Chatbots to the Big Idea: why Campaign's New Thinking Awards are for those doing different and making their mark