Heineken is rolling out a fresh creative strategy for its premium lager brand Kronenbourg 1664, centred on its taste and provenance.

The campaign, which introduces the strapline 'A Taste Supreme', is the first work by Ogilvy & Mather following the agency's appointment to the £5m creative account earlier in the year.

Rolling out across outdoor and national press from next week, the activity comprises a series of executions venerating Kronenbourg's taste credentials.

The ads marry images of the beer with phrases such as "The tongue never lies," "To taste is to know" and "Measured in depth not volume".

The creative has been inspired by the Strisselspalt hop, known by brewers as the "caviar of hops" from which the taste and aroma of Kronenbourg 1664 derives.

The activity forms the first phase of a multimedia campaign that will run into next year.

Its previous campaign, created by Bartle Bogle Hegarty, positioned the brand as a lager to be savoured slowly.

Bruce Reinders, brands director for premium lagers at Heineken, said: "We set out to create advertising that celebrates the brand's distinctive taste and harnesses this product truth to set it apart." 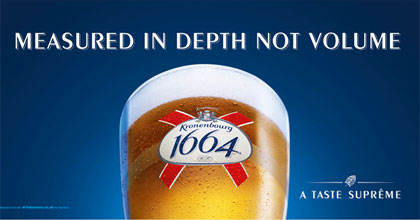