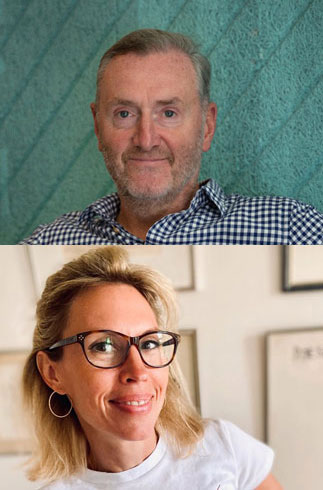 Laurence Green: It’s good to see that normal advertising service seems to have been resumed before whatever this year’s Christmas season has to throw at us. The five commercials shortlisted this month are all proper productions, a welcome relief from zoomvertising.

Lovisa Silburn: There’s also a strong theme across them of how we are stronger together, something that has become even more important in the last year. Lloyds is there by our side, O2 helps us stay connected, Bloom and Wild and McDonald’s underpin relationships rather than just flog flowers and burgers. (And Alexa of course is now one of the family also.)

LG: And maybe that’s what Christmas in adland will look like: low key celebrations of togetherness rather than the fire-breathing blockbusters of yesteryear. Until then: enjoy some polished Autumn advertising fayre from five brands that understand the role they’re playing in the real world and know what they’re doing with their advertising.

Two contrasting worlds - the everyday and the epic - collide in this spot in which a pair of elvish warriors are seemingly repeatedly commanded to re-enact a death scene by a chap doing his ironing. The reveal - that our ironer is watching the death scene in a film - playfully brings to life the fact the message that Alex can help you do and achieve almost anything, just with your voice.

This launch film for tech flower-delivery brand Bloom & Wild eschews any overly-sentimental category tropes and injects boldness and exhilaration into the act of caring for one another. Focusing on the sender of flowers rather than the recipient, we're shown an emotional timeline of a sibling relationship, right up to the point of one deciding what the message to her sister should say.

Lloyds Bank's iconic black horse gallops alongside the people and businesses of Britain as they move forward, reflecting the bank's own commitment to support them into the future. With the backing of "We've only just begun," this is a stirring celebration of the characteristics of a nation always evolving.

In this 60-second ad, a young boy receives his Mum's old car from his parents on his birthday. We follow his journey from embarrassment in front of his mates to a McDonald’s Drive-thru where he realises the freedom the car gives him and buys some McDonald's for his Mum in appreciation. The takeaway: little acts of kindness mean more than ever in this challenging year

Despite most of us relying on it for so many things in our lives, we never actually see our phone network. Until now, that is - if you're with O2. Meet Bubl, the O2 network personified in a little blue robot, who is with you through thick and thin.