Whether you made it to the festival or not, the official Cannes Lions Wrap-Up Report captures all the most important themes and moments

Culture makes profits. That was a prominent message from the Cannes Lions stage 2022. Consumers like to engage with a “highly monetised black culture, yet black culture itself is starving economically, which causes catastrophic generational harm; it is no longer OK taking more than you give to black culture,” said Made with Black Culture’s Tommy Johnson. He wanted to call the industry forward “to play your part in changing the way the world participates with black culture.”

Diversity, Equity & Inclusion (DE&I) was discussed across the board at Cannes Lions and is one of the six critical themes explored in the official Cannes Lions Wrap-up Report. Industry leaders and Lion winners emphasised the need to go further, co-create with communities and take a deeper multi-dimensional approach. Until now, the narrative of DE&I has exceeded the action and there is an urgent need to create new ways to benefit the communities we've traditionally marginalised or ignored.

Representation is no longer enough
Representation of women and people of colour on screen in Cannes Lions creative work increased by 30% between 2016 and 2021 (source: Cannes Lions and Geena Davis Institute study of Bias & Inclusion in Advertising). But it’s no longer enough to represent Black communities in advertising. The industry must take concrete steps to share profits and bake in economic equity.

A talk hosted by King James, part of Accenture Song, demonstrated how Blockchain minting agency Made with Black Culture’s ethical trade tech evaluates the use of Black culture. It authenticates consumer products to ensure a percentage of the profits are funnelled back into boosting the community. At the same time, Google’s Digital Craft Lion Gold winner ‘Black-owned Friday 2021’ by Google New York cements the importance of supporting Black-owned businesses all year, not just on specific days.

Speaking at the BECA Cannes Lions 2022 talk 'Top Black Marketers Talk Disruption, Paving the Way for Nextgen', Kirk McDonald, CEO, Group M, said: “Black culture has been at the nexus of music, arts, and creativity it has also – without getting credit – been right at the nexus of product innovation and so right at the nexus and innovation of business innovation. But not getting credit for it. This is the time to do that. That’s what it means to get that right and to actually make progress in the moment.”

Creativity as a tool for change
This year’s Festival marked the launch of five Global Growth Councils for Progress. Convening the most diverse and powerful voices in our industry to tackle the most pressing issues, the Councils’ remit is to unite the industry around one collective agenda.

The DE&I Council’s focus was on how creativity can be used to promote equality and inclusion for a better world, as well as more growth and value for all humanity. They talked about: the need for a universal measurement system to benchmark representation; the action that’s needed to change the brief to change the system at every level; unifying efforts under one focus; and the importance of talent in creating a more diverse output.

In Glass: The Lion for Change, Jury President Colleen DeCourcy, Former President, Wieden+Kennedy, said her jury asked two main questions of the work: How was creativity used as a tool to effect change; and did the work spark a long-term change that would continue to grow and carry on.

The Grand Prix went to ‘Data Tienda’, for We Capital, by DDB México, Mexico City / DDB Mexico, Ciudad de México, about which DeCourcy said: “83% of women in Mexico have no credit history. That’s 35 million women who are invisible to the country’s financial system. Data Tiende’s use of local community shopkeepers as data points for the viability of low-income women as loan candidates was staggeringly simple, easily sustainable and a blueprint for change that could be used anywhere in the world. As a jury, we gravitated towards this creative idea that took a fresh look at a very old problem and saw a new way to solve it.” 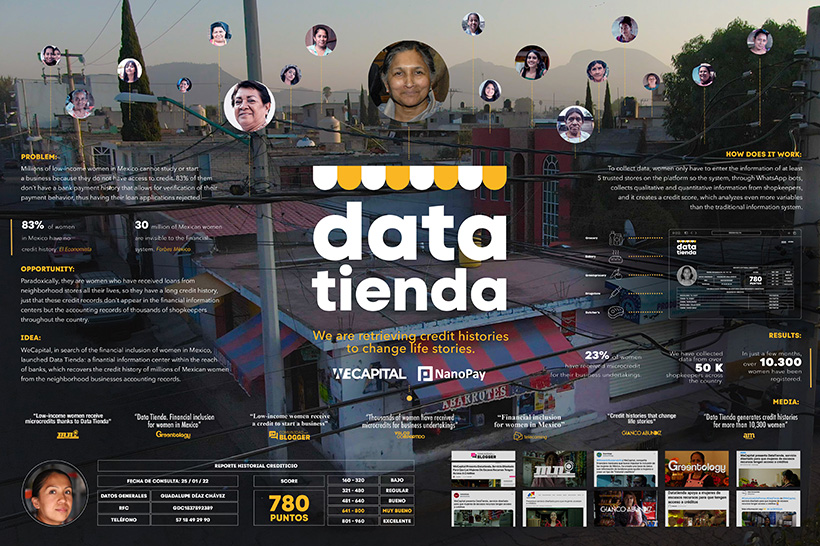 Building the betaverse
The Festival's focus on DE&I shifted this year from being solely about ensuring equitable representation to demanding fair reward. What’s apparent from across the Lion awards and the stages is the need to start showing up in every sphere, and that includes in the metaverse, where critics are asking whether we should be investing in metaverse and Web3 if the physical world has so many problems.

With some 60% of people believing there’s a lack of inclusivity in virtual worlds, the risk is that biases in the physical world are mapped and magnified into new dimensions. Creative minds must avoid utopias and strive for 'protopias' – realistic progress and slow change that improves society over time. "It's about integrating social good and safety into the virtual worlds that we're creating and participating in," says Cassandra Napoli, senior strategist at WGSN Insight.

Read more insights and learnings around six critical themes in the official Cannes Lions Wrap-Up Report which is out now.