LinkedIn will launch a rare consumer-targeted campaign through outdoor and digital media on Monday, featuring real LinkedIn members talking about their own takes on success.

The integrated campaign titled "In It Together" is based on the insight that many people feel that success is defined by traditional notions of promotions, seniority and the corner office, and that their own version of success may not be widely recognised or supported.

This insight was gleaned by a survey conducted by YouGov on behalf of LinkedIn late last year, which found that over a quarter of British people (29%) believe that traditional perceptions of success are outdated, while three quarters (76%) admit success means different things to different people.

In response to this, LinkedIn and BMB have created an integrated campaign that uses a mix of video and powerful stills from LinkedIn members celebrating the many different things they’re "In it" for.

In the UK, this will feature stories such as Shanice Mears who is "In it to change things" (main image above) as she strives to ensure that everyone has equal access to knowledge and opportunities regardless of background.

In Germany, where the campaign will also launch on Monday, it will include Tobias Eppler who shares how support from his family when discovering he was gay encouraged him to help people be their authentic selves at work.

And in France, where the campaign will launch on 25 June, it will feature members such as tech developer Nelly Meunier who created a solution to keep grandparents connected to their families after going into care. 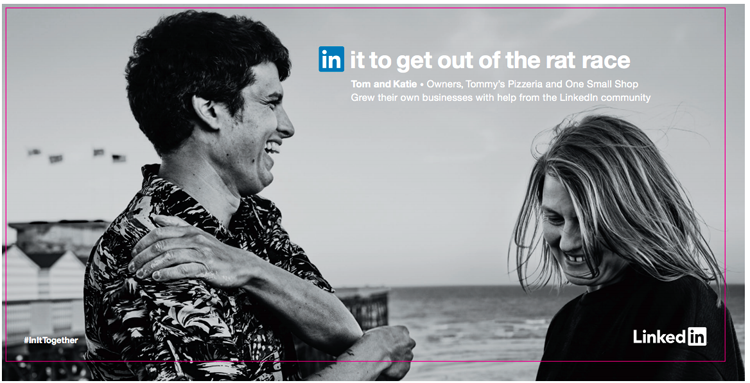 "We know from listening to our members that not everyone feels supported in the pursuit of their own version of success, particularly when this falls outside what is perceived as a ‘traditional’ career path," Ngaire Moyes, senior director of brand marketing and corporate communications for the EMEA region at LinkedIn, said.

By using real member stories, LinkedIn intends to show that there are many different definitions of success and that people should feel confident and empowered to pursue whatever theirs is.

"We hope these inspiring stories show how powerful it can be to pursue your own path and the role that our professional and personal communities, including those on LinkedIn, play in achieving this success," Moyes said.

Goodstuff led media in the UK, France and Germany, along with Ad Pepper for online media in Germany. Hope&Glory are driving the earned media campaign in the UK, with Hotwire and Havas doing the same in Germany and France respectively. Social activation is being managed by Brands2Life in the UK and France, while in Germany Grayling is focused on influencer relations  and Buddybrand on social media.

It will run across digital channels such as Facebook, YouTube and LinkedIn (of course), out-of-home and cinema (in Germany only).

The campaign also includes an employee activation component, with LinkedIn employees in these markets encouraged to share what they are "in it" for, while LinkedIn’s editorial team will be encouraging members and influencers to do the same on the platform.

This latest campaign builds on last year’s "This is Success" activation in London, Berlin and Munich, which began to discuss some of the alternative definitions of success in each country. Of those that were exposed to the campaign in the UK and Germany, there was a jump in the number of people saying it made them feel that LinkedIn is a place where they feel they belong and is a brand they love.

It will also seek to replicate the success seen with versions of the "In It Together" campaign which ran at the start of this year in the US, including a TV ad spot during the Golden Globes, followed by a rollout of the campaign in China and India.

LinkedIn to give Londoners a taste of success