Dominance of capital could be 'tested' because of remote working.

The London-centric nature of the UK ad industry has been revealed in new research by Campaign.

Geographical bias towards London is greater among the three largest groups: 90% of WPP’s 10,000 staff and Omnicom’s 6,500 people and 95% of Publicis Groupe’s 5,000 employees work in London.

Sky and ITV, plus the BBC, which carries no ads, have a broader geographical spread – with about half or more of their staff outside the capital.

The figures are stark, given that the wider London area represents only about 20% of the UK population, although the city also plays an important role in serving international clients. 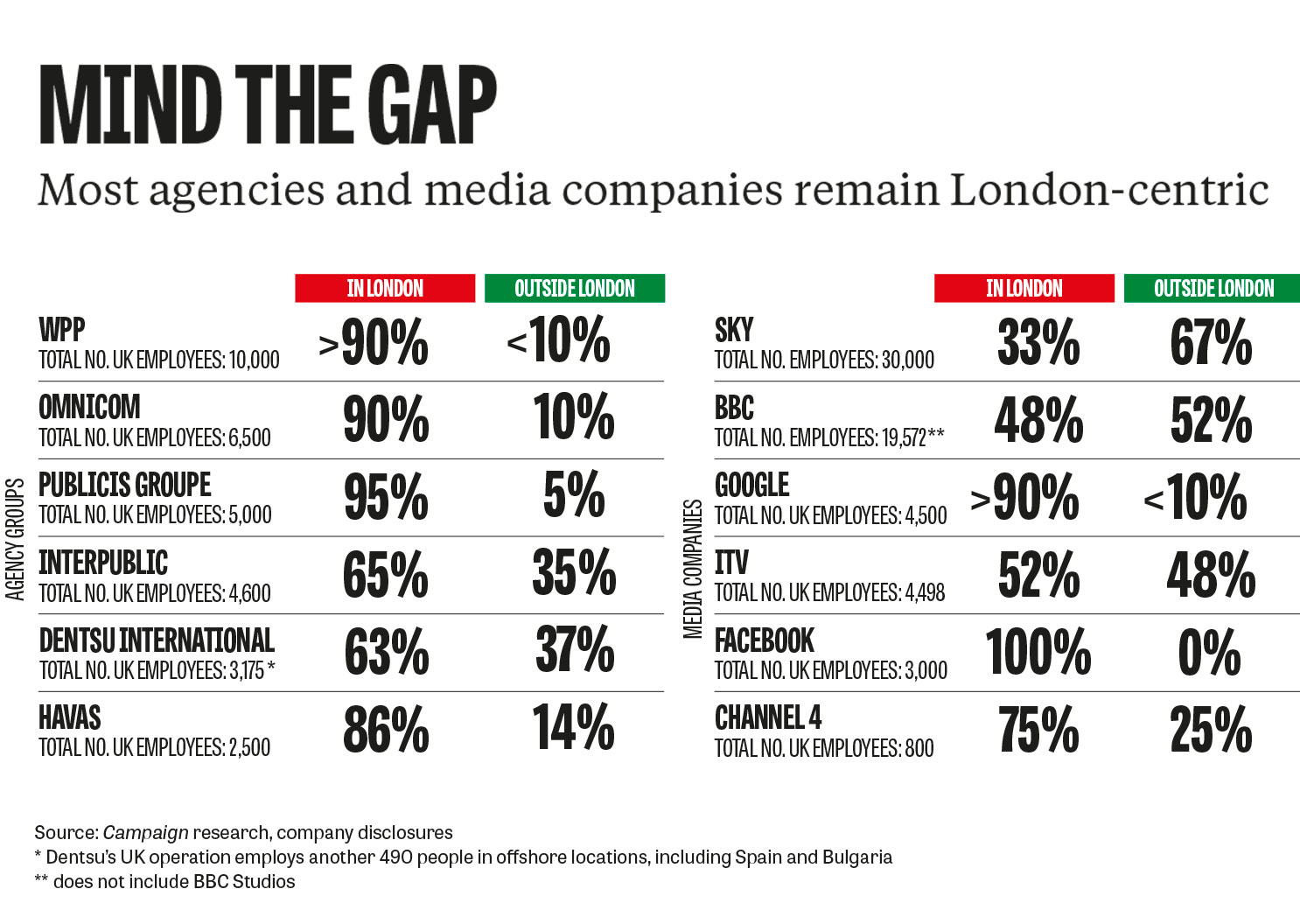 Industry leaders said the combined effects of the coronavirus economic downturn, the sudden surge in remote working and the likely fall-out from Brexit could reshape the UK ad industry.

Paul Bainsfair, director-general of the IPA, which represents agencies, said Covid-19, in particular, was having an impact.

“There’s no doubt that the London-centric nature of the advertising industry will be tested, although to some extent it will depend how long it goes on,” Bainsfair said, referring to the virus.

“Because we don’t have people filing in to offices in London every day and they are working remotely, it will be possible to draw on a bigger talent pool.”

The Covid-19 crisis began as a “temporary” interruption “but as it goes on for longer and longer, you think this could be permanent” when it comes to working habits, Bainsfair said.

“It will test the idea that London needs to the centre that it has always been, plus there are extraneous factors like Brexit and the cost of living.”

However, Bainsfair cautioned against the idea that the London-centric nature of adland meant it did not represent all of the UK.

“I’ve worked in advertising in London all my life and I’m a Londoner but, over the years, most of the people I worked with weren’t Londoners – they were from all over the UK,” he said.

Stephen Woodford, chief executive of the Advertising Association, pointed out the UK ad industry’s workforce is already “spread geographically with more than half outside the capital and nearly a third of international talent working beyond the M25”.

However, he said: “There is, no doubt, that the Government with its levelling-up agenda is looking at how all industries can strengthen beyond London and the South-East over the coming years.

“The Covid-19 lockdown and subsequent blend of remote and office working has highlighted the opportunities to expand the ways teams work together and also the potential to bring in talent from many different backgrounds, all serving to support and foster our reputational qualities.”

Woodford added: To be the best of the best, we need to see a strong London alongside strong Creative Cities throughout the UK, employing the very best, diverse mix of talent, home-grown and international, to deliver great work for UK businesses and international customers from around the world.”

Additional detail about how the UK’s biggest agency groups and media owners compare:

(All figures are approximate and provided by the company, unless otherwise stated)

Locations include Windsor and Dublin, Ireland

Sky does not disclose staff numbers. These figures are estimates for Sky Group, with the majority of staff based in UK & Ireland

Regional numbers are approximate and do not include BBC Studios.

Google does not give an exact breakdown of staff numbers.

All change for London and the creative map of the UK?

Publicis claims its model is working during Covid as Q3 decline eases to 5.6%