In the first in a new series, Media Week's David Emin invites an industry heavyweight out to lunch at one of the Boisdales restaurants. Who better to start the dining experience than the Lunchmaster himself, City AM's co-founder Lawson Muncaster.

My lunch guest today is Lawson Muncaster, co founder and managing director of City AM. He had just flown in from New York and was suffering slightly having had a tooth extracted under an emergency procedure.

What's your favourite way to spend a Sunday afternoon?

A dog walk with the family, then trying to convince them when we get home that there's good sport to watch on TV we all should watch (but invariably they don't believe me,) and then Sunday tea.

If you hadn’t started City AM what would be your ideal job?

What’s the most indulgent thing you’ve ever done?

Ha. I do lots of indulgent things but it was probably a taxi from Geneva airport to Zermatt to join the BLM ski trip one year. I thought the price I was quoted was in French francs but it was Swiss francs and cost me a thousand pounds. I got a bollocking when I put the expenses claim in on that one.

Your motto is "Plus est en vous", which means "There is more in you than you think". Bearing in mind your nickname is Awesome Lawson the Lunchmaster, is this how you got your nickname?

No, it's my school motto. But the nickname came from Media Week years ago when I popped into a restaurant called Bamboo in Charlotte Street to make a conference call to New York and was spotted by a Media Week journalist sitting on my own.

Obviously I couldn't sit there without eating so had a cheeky starter while I was on the phone. Needless to say I went out afterwards to eat a proper lunch. My good friend Eric Newnham (CEO of Talon) now actually owns a horse called Lunchmaster named after me. 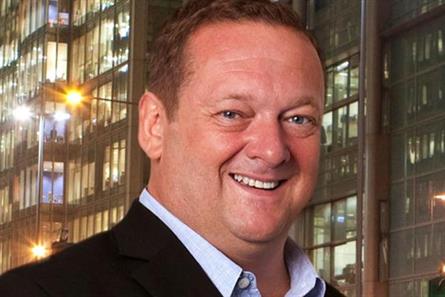 You used to live with Eric Newnham. Would you describe the pair of you as Chandler and Joey or the Odd Couple?

I guess The Odd Couple. We were so tidy we used to get complaints from the neighbours about our washing being out on a line in front of the building. Most nights you'd find us in our jimjams watching TV together on the sofa.

This is a two part question. First, If you had to change one thing about yourself, what would it be?

I'd stop always saying yes when people ask me things. As I've got older I think I understand that it’s OK to say no occasionally.

Would you like another bottle of wine before we go on?

Second,  if you had a third arm, where would you position it and what would you use it for?

On my bum for writing notes behind my back. Next time I met that person I could recite the previous meeting as if it were yesterday.

What’s the oddest present you've ever been given?

I was given a drone by my mother-in-law last Christmas. One of those flying machines that you can video things with. I’ve no idea why. I'm planning on using it and could either be very mature and use it to assess all the great golf courses of North Berwick and East Lothian, or be a complete pervert and use it to look into my neighbours' garden. I haven't decided which way to go yet.

Your mother in law sounds great… mine just drones on. As a press baron you must have "access all areas" but has anywhere ever denied you entry?

I've never really gone anywhere where I thought they wouldn’t let me in. I may have a bad boy reputation but at the end of the day I'm pretty honourable.

What’s been your most recent embarrassing moment?

Walking into a very trendy bar to meet Martin Gilbert, chief executive of Aberdeen Asset. I was early and thought I'd pull up a chair and sit down at the first table I saw. A few people were looking over at me and I assumed this was either because they recognised me or were impressed by my tan.

It was at this point that the manager came rushing over to inform me that the table I was sitting at was used for nuts and empty glasses. I thought it was a bit small.

If you could call yourself 10 years ago and had 30 seconds to speak, what would you say?

Hold out for a better yield, sailing a successful news content business against the tide keeps you on your toes. Should have been more forceful of what a brilliant audience we have. 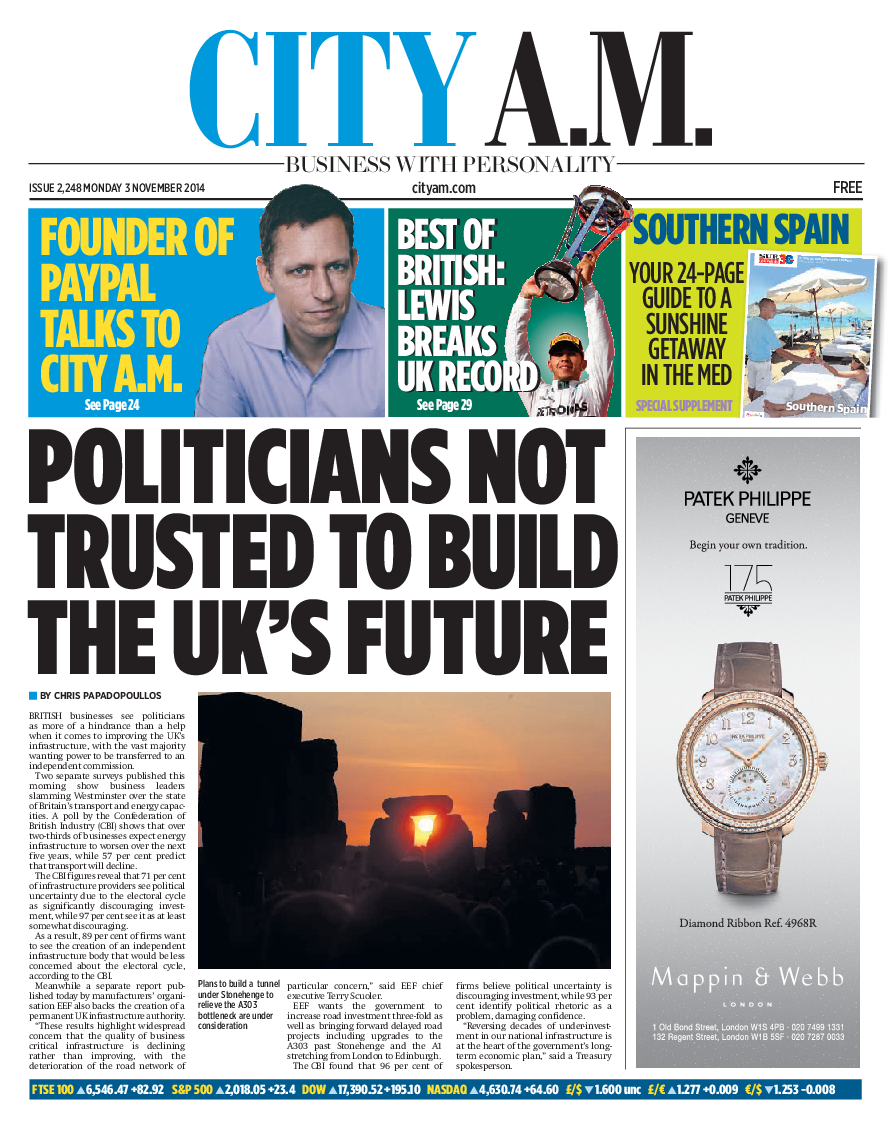 After 10 years and having spent £8 million City AM. has four magazines, a newspaper, an events business, a mobile business, and a digital site that's getting 1.3 million uniques a month and a proper news content business that we can monetise.

That’s probably what we got right.

The only thing we may have got wrong is that we could have got there quicker if we had spent more money, but then we would have diluted our equity in order to get more money.

How scary was it in the beginning?

When we were in the first few weeks of the launch Andrew Neil said City AM would only last 12 weeks. I was so angry that a fellow scot would say something like that.

So who actually owns City AM?

Jens and I own 50% of the business and the other 50% is owned by a Dutch company called Blue Bull, owned by Boudewijn Poelmann and Derk Saur. Boudewijn is also chairman of City AM. He also owns the Postcode Lottery.

Blue Bull used to own a newspaper in Russia and after selling to a Norwegian company I persuaded them to invest some of their funds in City AM.

You also had a Russian shareholder who died in mysterious circumstances… what happened?

When Boudewijn and Derk sold the Russian newspaper, their Russian lawyer, Leonid Rozhetskin said he would be interested in coming in with them in the next newspaper venture that their investment company, Blue Bull, invested in, which was City AM.

Subsequently he was abducted and murdered and his body was found three years later. It was identified by his DNA. No one knows who did it. It's just a tragic incident that happened. He left behind a child. Its truly sad.

When do you think you’ll sell?

Who says we need to sell? To be honest we have no hidden agenda and we both like working in London.

We have grown our top line revenues by about a million each year and now turn over £10 million on £10 million of cost. We are now at the next stage of our development.

Has anyone made you an offer yet?

Was it an offer you couldn’t refuse?

Was it another media owner?

What’s the best story that City AM has ever run?

The best was that we predicted that Boris Johnson would win the mayoral election. The most significant was when Lehman Brothers went bust. We were the only newspaper that got this out as we don’t put the paper to bed till 2am. That’s why you never see us on Newsnight or the News at 10 with the other papers showing their front pages, as we are still writing ours.

So, is this where you thought you’d be now?

No. By now I thought we’d be on our second bottle of wine for gods sake.

That’s not quite what I meant. What does the future hold for City AM?

It’s coming up to our 10 year anniversary and now we will start to make money and make City AM a success in its own right.

We are going to have a big party in September to celebrate and to say thank you to all those people in agencies and to our clients, who believed in us and helped and supported us in those early days. And also to say thank you to the great team who work for City am and have got us to where we are today.

OK, lets have another bottle of Chablis then.

If you’re just starting out on the career ladder go and join Aberdeen Assets graduate trainee programme. Two years, four continent’s, and experience working across four departments. That is a wonderful place to be.

My tip for media businesses is start to think about your employees future. Give them a little bit more depth because if you don’t there will be other places for them to go. Why? Because we need to attract and retain the best talent within our industry.

Starter: We shared six hot scotch eggs made with quailseggs
Main course: Lawson had Linguine of Devonshire crab and David had the Rib of Beef on the bone with fries.
Drink: Chablis Bougros Grand Cru 2008
Dessert: No room this time for desert.

If you have the appetite to enjoy the same lunch as David and
Lawson go to www.boisdale.co.uk

Out to lunch with Boisdale Life and David Emin consists of a Starter for 10, where the guest is given 10 questions to answer, the Main Course, which includes the current role and company in a little more depth and then finish on Desert, where we look into the future.

The guest gets to choose a whine, (or a whinge!) and finally must leave a tip (to someone new starting in the business).

Out to lunch with Boisdale Life and David Emin: Jonathan Durden

Out to lunch with Boisdale Life and David Emin: Jenny Biggam