Unilever's Lynx brand has been hit with a double ban for separate outdoor and internet campaigns after the advertising watchdog upheld complaints that they objectified women and were inappropriately located where they could be seen by children.

The outdoor ad for Lynx Excite, which ran in July and was created by BBH, drew 113 complaints. It featured a bikini-clad woman under a shower alongside text stating "the cleaner you are the dirtier you get".

A number of complainants claimed the posters had been placed near schools and were pointed out by their young children who asked their parents to explain the meaning of the text.

Outdoor media owner CBS Outdoor told the ASA that after consulting the CAP Copy Advice team it declined to run the ads on the initially booked campaign for 150 sites on the London Underground and ran a much reduced campaign on 40 sites across some National Rail stations.

Fellow outdoor company Clear Channel told the ASA it decided not to display the poster near primary and secondary schools, in areas where there was a majority ethnic population and near places of worship and in areas in which it had received complaints regarding ads before.

The digital campaign, which ran in June and July and was created by TMW, attracted 15 complaints.

It promoted Lynx variant Dry Full Control and featured model Lucy Pinder, including a video of her jogging, applying lip gloss and eating whipped cream off her finger alongside a "what will she do to make you lose control?" tagline.

The end shot showed Pinder beckoning to the camera and was accompanied by a box asking viewers to fill in the blank for a statement reading "Lucy Pinder [blank]ing makes me prematurely perspire". 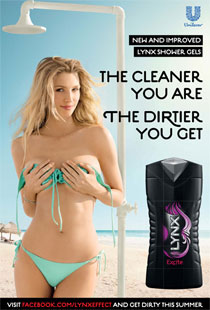 Unilever defended the outdoor ad by saying the image was not "overtly sexual" or "indecent" and the "overall feel of the campaign, the poster and Lynx advertising over the years was cartoonish".

It defended the internet campaign by claiming Pinder was not being degraded because she was portrayed as a woman who was confident and in control.

The Advertising Standards Authority (ASA) judged the outdoor ad complaints under its new tougher guidelines introduced as a result of the Bailey Review on the premature sexualisation and commercialisation of childhood, although the guidelines were introduced after the campaign was booked.

On one count it ruled the ad implied using Lynx would lead to more uninhibited sexual behaviour and "in so doing would be seen to objectify women" and was likely to cause widespread offence.

On a separate count it ruled the ad was irresponsible because "the suggestive nature of the image and the strong innuendo were not acceptable for public display where they might be seen by children".

However, it rejected complaints that the poster encouraged promiscuity because it did not contain a sex scene or suggest unprotected sex or sex with multiple partners was desirable.

In the case of the digital campaign, the ASA ruled that because activities carried out by Pinder were done in a sexually provocative way with a particular focus on her cleavage, coupled with the impact of the text, the ads were likely to be seen as degrading to women and were therefore likely to cause widespread offence.

It also took issue with the way the campaign was targeted in digital media, ruling that the ads were irresponsibly put in front of children, for whom they were not suitable.

While it accepted that Yahoo, Hotmail and Spotify had kept the ad away from people aged under 16, it believed the ad had been viewed by a wide range of people on the Rotten Tomatoes and Anorak websites because these were not protected through age verification or similar targeting.

Do brands know how to engage young people?