With a long and illustrious history of creating content for an unparalleled female-strong audience, Mail Metro Media's ability to communicate with women continues to achieve impressive results, with readers and advertisers. Campaign takes a closer look.

Industry trailblazers
It’s been 50 years since Daily Mail became the first newspaper to include a section created specifically for women. Amid a landscape of national press that had largely neglected the UK’s then untapped female audience, it was an unprecedented move. Fast forward to 2020 and Femail in Daily Mail and femail.co.uk on MailOnline reach women of every age, offering a mix of style inspiration, thought-provoking columns from eminent writers, tips and tricks plus ‘water cooler-worthy’ real-life stories. Along with The Mail on Sunday’s YOU magazine – read by more women than any other women’s weekly or monthly magazine – Metro newspaper and metro.co.uk, there are now a massive 5.6m loyal women readers a day across the group’s platforms, cementing their reputation as experts in recognising who today’s woman is and the content she really wants. And commercially that makes them unique in the market place. From what to buy, read, wear or watch, to the health news to keep informed of and the cultural trends to have an opinion on - Mail Metro Media gets it.

Insightful communicators
The relationship with its female readership is clearly something the group is proud of. And while its ability to communicate with them editorially is exceptional, its commercial capabilities prove just as strong. The partnerships team led by Anne Shooter, and commercial editorial team, led by Harriet Arkell are highly skilled in devising innovative, dynamic campaigns to achieve incredible results. ‘Having women, and lots of them, across our editorial teams means that we have an advantage when it comes to communicating with female readers, whether in our newspapers or online,’ says Shooter. ‘Our heads of project management, commercial editorial, design and our three partnerships directors are all women, as are most of our teams,’ she continues. ‘We know what women’s concerns, interests and aspirations are, as they are often the same as ours. That gives us the edge when it comes to engaging our huge female audience.’ 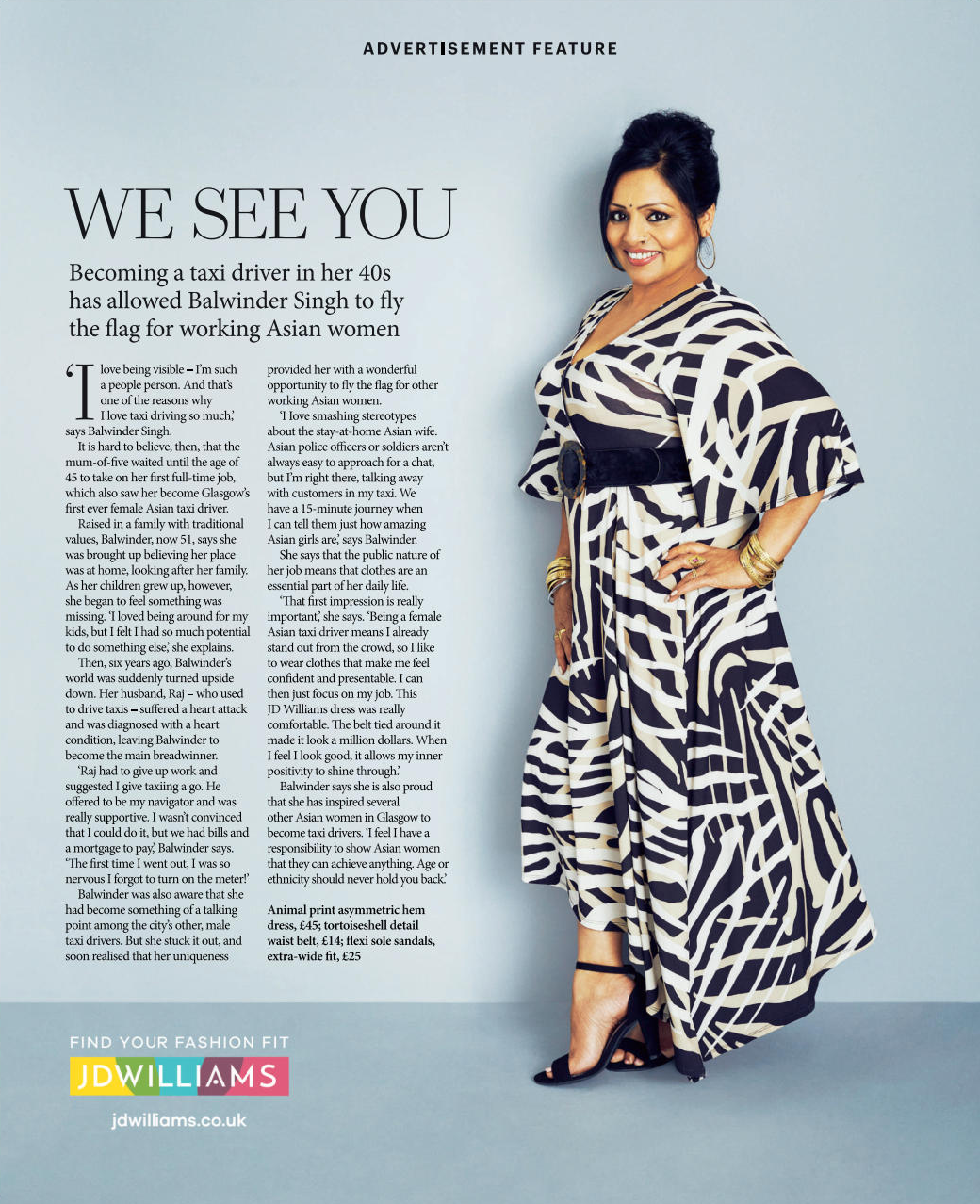 Pushing boundaries
Case in point, 2019’s partnership with JD Williams. Keen to engage and empower the often-overlooked older female audience, the fashion retailer challenged Mail Metro Media – whose Femail and YOU Magazine readers spend 40% more on fashion every month than the average woman - to create a campaign to make females over 45 feel powerful and included, showcasing the brand’s clothing and encouraging them to buy. The answer? We See You – a cross-platform, emotionally driven campaign that sought to position JD Williams as a champion of women. Speaking ahead of the launch, YOU Magazine editor, Jo Elvin, said, ‘Too often in society, we start to feel invisible once we hit our 40s and beyond. This campaign will remind the world – and indeed ourselves – that we are much more rounded characters who are still joyous, energetic, adventurous, funny and inspiring individuals. We never stop feeling, in our heads, like our younger selves, and this campaign will shine a lot on that spirit.’

Armed with the knowledge that 55% of women feel they’re expected to ‘vanish from public life as they get older’ and 45% aged 50 feel patronised by advertising, Mail Metro Media set about smashing tired stereotypes. YOU Magazine capitalised on the readers’ love for human interest stories with a five-page editorial shoot profiling inspirational, middle-aged women while a We See You Live event, held at Manchester Hall, aimed to interact with readers on an entirely new level, presenting the JD Williams brand in a tangible, relatable way. Jo Elvin, chaired a lively panel discussion with speakers including TV presenter and model, Lisa Snowdon. ‘It was a fantastic night,’ says Arkell. ‘I came away inspired by all these women making midlife the time of their lives.’ It was an undeniable hit for the JD Williams brand, too, with Mail Metro Media’s campaign surpassing its objectives – most notably, a shift in perception of the brand including an incredible 100% uplift in consideration to buy, while MailOnline’s accompanying article on real women feeling confident over 50 amassed over 185k views. ‘It was a great campaign to work on,’ remembers Arkell. ‘Several of us at Mail Metro Media are 45-plus, so we knew exactly where the client was coming from.’

Creating bespoke content
Eager to embark on new creative territory, last year saw Mail Metro Media launch its first ever partnership podcast in association with Pukka Tea – a health-conscious, ethical and sustainable brand looking to increase awareness among consumers and boost sales. ‘Each campaign is totally bespoke, but they all involve a combination of strategic thinking and creativity,’ explains Shooter. ‘We have a brilliant insights team here and we always start with facts around what our audiences feel and build out creatively from that – obviously aligning our ideas with a particular brand’s challenges and KPIs.’ With over 7.6m people in the UK listening to podcasts every week, and half of those aged 15-35, the content and partnerships team felt a podcast, hosted by Jasmine Hemsley – a bright light in the health and wellbeing world - was the perfect vehicle to highlight Pukka’s new Turmeric Stay Active Tea. 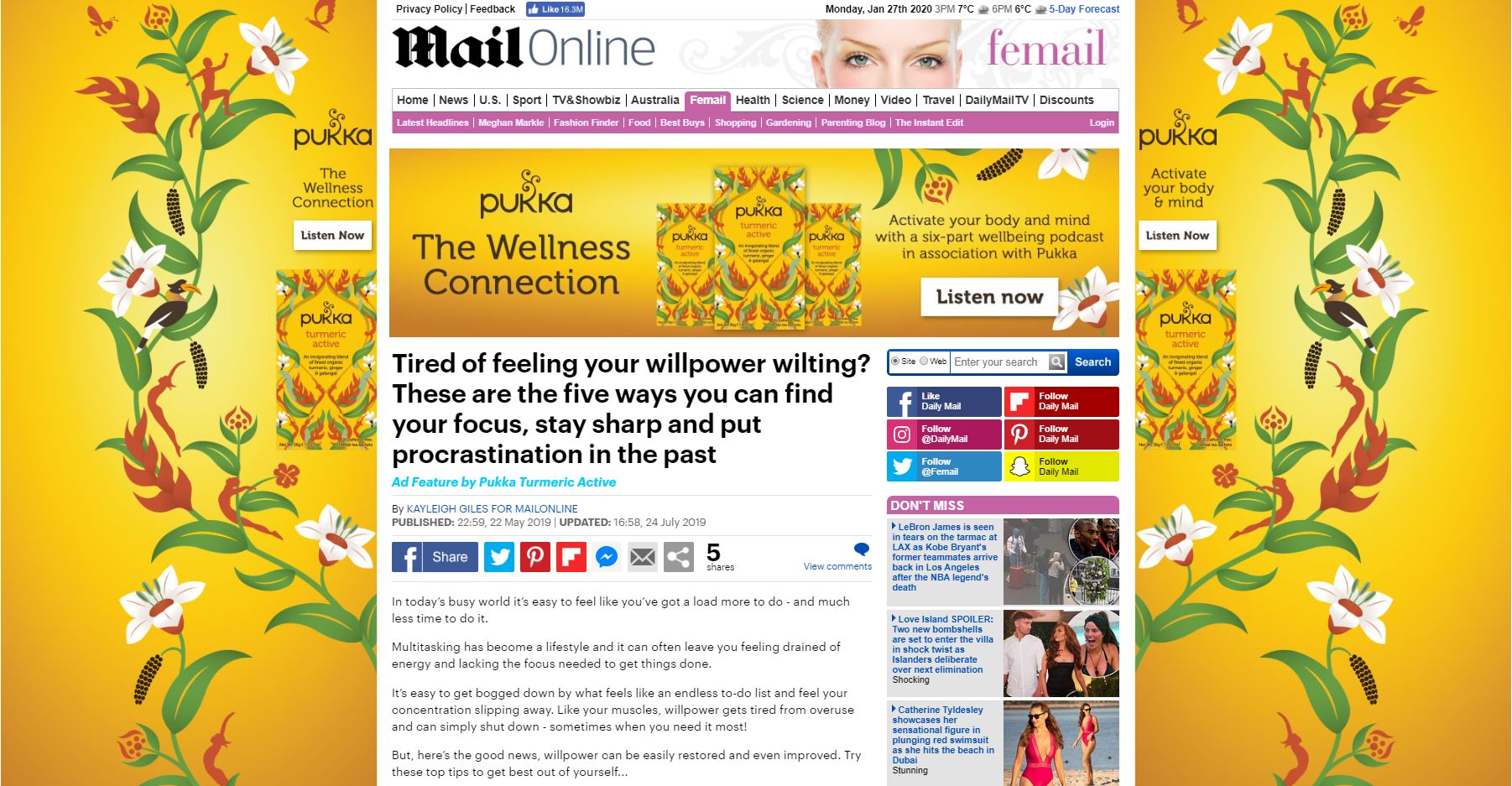 Motivated by the research that 71% of Mail Metro Media’s audience lives a healthy lifestyle, it set to work creating The Wellness Connection: a six-part series, rich in the informed, topical health content its readers love, featuring renowned experts from different disciplines, including TV doctor, Dr Ranjan Chatterjee, and fitness and running guru, Adrienne London.  Using the interactive podcasting platform, Entale, which enables listeners to visually and audibly connect with content, meant people were able to easily click straight through to and purchase Pukka’s products – an inspired choice as results showed that 25% of listening time was spent interacting with the extra content available. As for the podcast’s performance on the iTunes chart, it racked up a staggering 50k downloads – more than double its original target – earning a place in the top 3 on the health podcast chart.

‘I’m addicted to communicating with an audience – and I have a huge one with this job.'

Campaign chats to the award-winning editor of YOU Magazine, Jo Elvin, about her own experience as a woman in journalism. 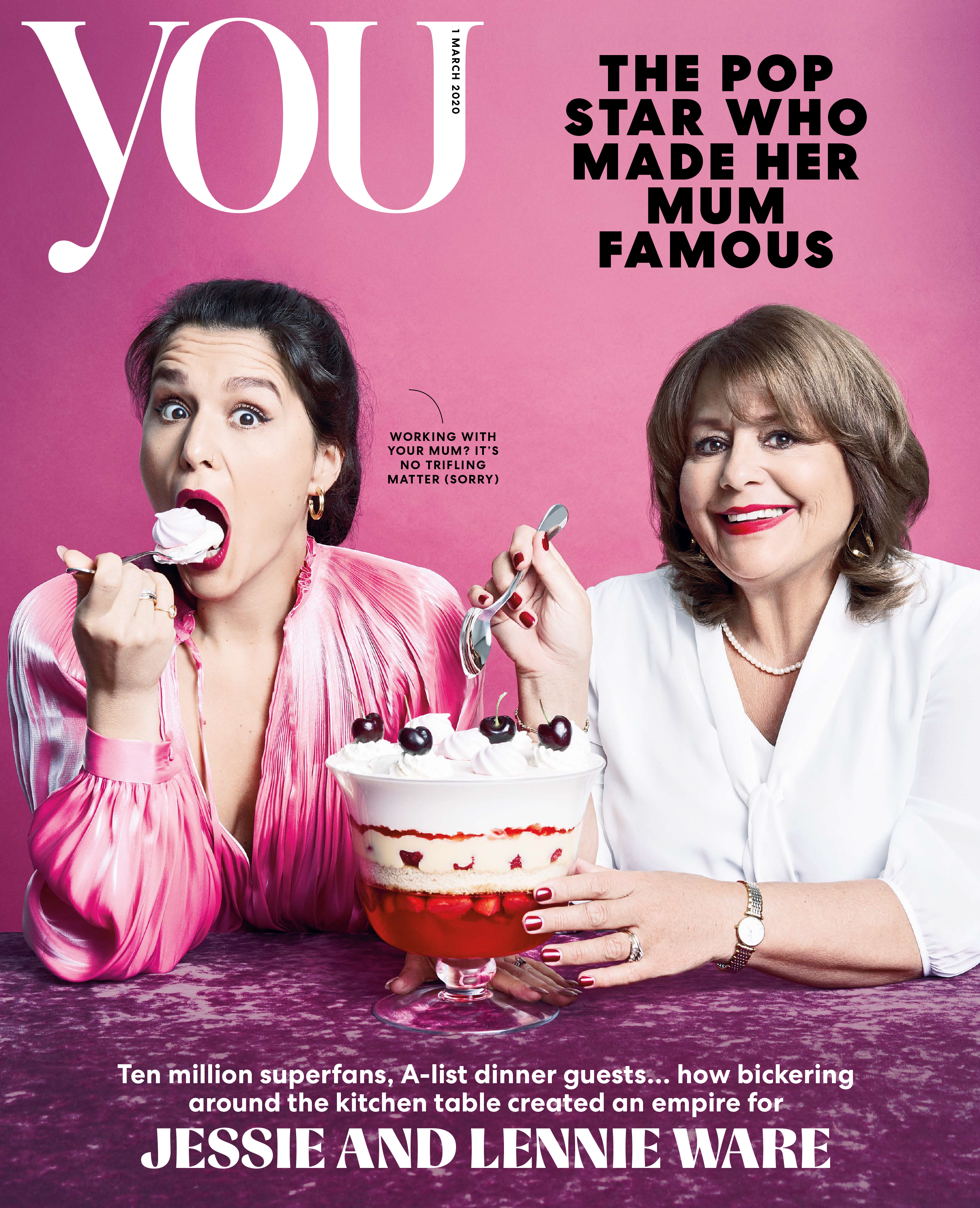 I’m loving the variety of our content in YOU Magazine. I love that we still see so many areas in which we can grow our reach – we’ve just launched a podcast with Liz Jones, for instance – and the enthusiastic engagement of our readers.

My dream job, from about the age of 14, was to work on a magazine. I didn’t care what the actual job was. I wouldn’t have dared dream I’d be in charge of one but there was no other career that drew me quite so strongly.

I think women in general are hindered in my business by getting to a certain level and then it’s hard to go any further. I’ve held senior positions for a very long time now, but the very top executive level in most places I’ve worked continues to be male dominated. I don’t know how we change this without forcing a change.

It’s already a lot more flexible for women working in the media than it used to be. I work with a lot of women now who build their work around time frames that suit them. I think it’s possible that our traditional office spaces will become museum exhibitions. As we move towards more flexible models for working hours and more people are paid for particular pieces of their expertise rather than a set salary for a structured office role, this may well open up careers for more women who felt they’ve had to choose between working and looking after children. I also think that so-called ‘soft’ skills are becoming increasingly important which will make the media world re-evaluate the management skills that are generally seen as ‘weaker’, more female traits.

I used to fear what would happen to print media, and by association, what would happen to me. The last few years have taught me that there will always be outlets and audiences for creative thinkers, so I’m approaching this decade being open to challenges and opportunities.

My professional life rule is to ignore trolls on social media. Funnily enough, I broke that rule just three days ago, swearing in rage at a few people who mocked the grief I expressed about losing a friend. For that one time only, I don’t regret breaking it at all.

I’m proud that I’m consistent about the way I represent women and let them have a voice that isn’t tied exclusively to their roles as either wives or girlfriends. I’m proud of things such as launching the Glamour Women of the Year Awards at a time when there wasn’t really anything like that on the landscape in the UK, and how many women I’ve given a start in media who are now doing important, glamorous jobs all over the world.

Somewhere, somebody out there right now thinks you’re a s*** and there’s nothing you can do about it.’ That’s the piece of advice that has always stuck with me. It helps me clear my head and make - what I hope - are good decisions!

Mail Metro Media is headline partner of Campaign's Female Frontier Awards which put a spotlight on those women who are constantly pushing the boundaries with their groundbreaking achievements in the marketing, advertising, media and tech industries.