Manchester City's Sergio Aguero can't stop talking about it. Teammate Mario Balotelli – ever the contrarian – is indifferent to it. On the other side of town, Manchester United seems to be doing its best to ignore it.

The 'it' is Twitter, which this past season has cemented its position as the social network of choice for leading footballers. Millions follow their tweets, which are then amplified by a traditional media that revels in this unprecedented access to players' views and lives. Football clubs are also joining the party, with the aim of enhancing their brands and making more commercial gains from their legions of fans worldwide.

Leading the charge is Manchester City, the club that in May ended a 44-year wait to become Premier League champions. The effort is masterminded by Russell Stopford, the club's head of digital - a serial tech entrepreneur and a qualified molecular physicist with a love of marketing.

Stopford, who joined the club at the end of last year, plots Manchester City's digital domination from an office near the club's Etihad Stadium. The room resembles one belonging to a mad professor, full of whiteboards scrawled with details of digital innovations. From this lair, the humble printed matchday programme – once the main communication mechanism of a football club – is viewed as an anachronism.

The starting point for City's myriad digital initiatives, says Stopford, is that they operate on a quid pro quo basis with supporters. He points to the crowdsourcing of fans' ideas for the club's iPhone app as an example.

'Manchester City is now a digital-first brand,' says Stopford. 'Social media fits with the brand values of the club: transparency and giving the fans something unique.'

This is an attitude echoed across the sports marketing industry. Sean Walsh, who runs the sports digital media blog Digital-Football.com, says: 'City's strategy of entertaining rather than marketing has been the crucial difference between the champions and every other Premier League club on social media. By understanding the passionate psyche of a football fan, they bridge the gap between fan and superstar.'

Twitter sales director Bruce Daisley bestows similar praise. In his role as a judge of the 'Social Brands 100' league (Marketing, 30 May), he was impressed by the club's output, citing its activity around '#Champions' as 'one of the best examples I've seen' of a promoted trend. Manchester City was 16th in the chart, making it the highest-ranked football club.

The club's use of Twitter stands in stark contrast to its rival Manchester United, which has a feed, but has yet to post a tweet. Over the past year, Manchester City has used the micro-blogging platform to host live chats with star players such as Nigel de Jong and invited fans to suggest a team talk to club captain Vincent Kompany via Twitter - an innovation that has, according to Stopford, been copied by other clubs.

The fan who posted the most inspirational tweet - as chosen by Kompany - received the skipper's matchday shirt, armband and a poster of their speech signed by him.

Stopford also highlights that former captain Patrick Vieira - who became a Manchester City ambassador after he retired from the game last year - can often be found tweeting his 'not bland' views on the club's official feed during matches. The club also runs moderated 'big-screen tweets' by fans on match days at the Etihad using '#blueview'. 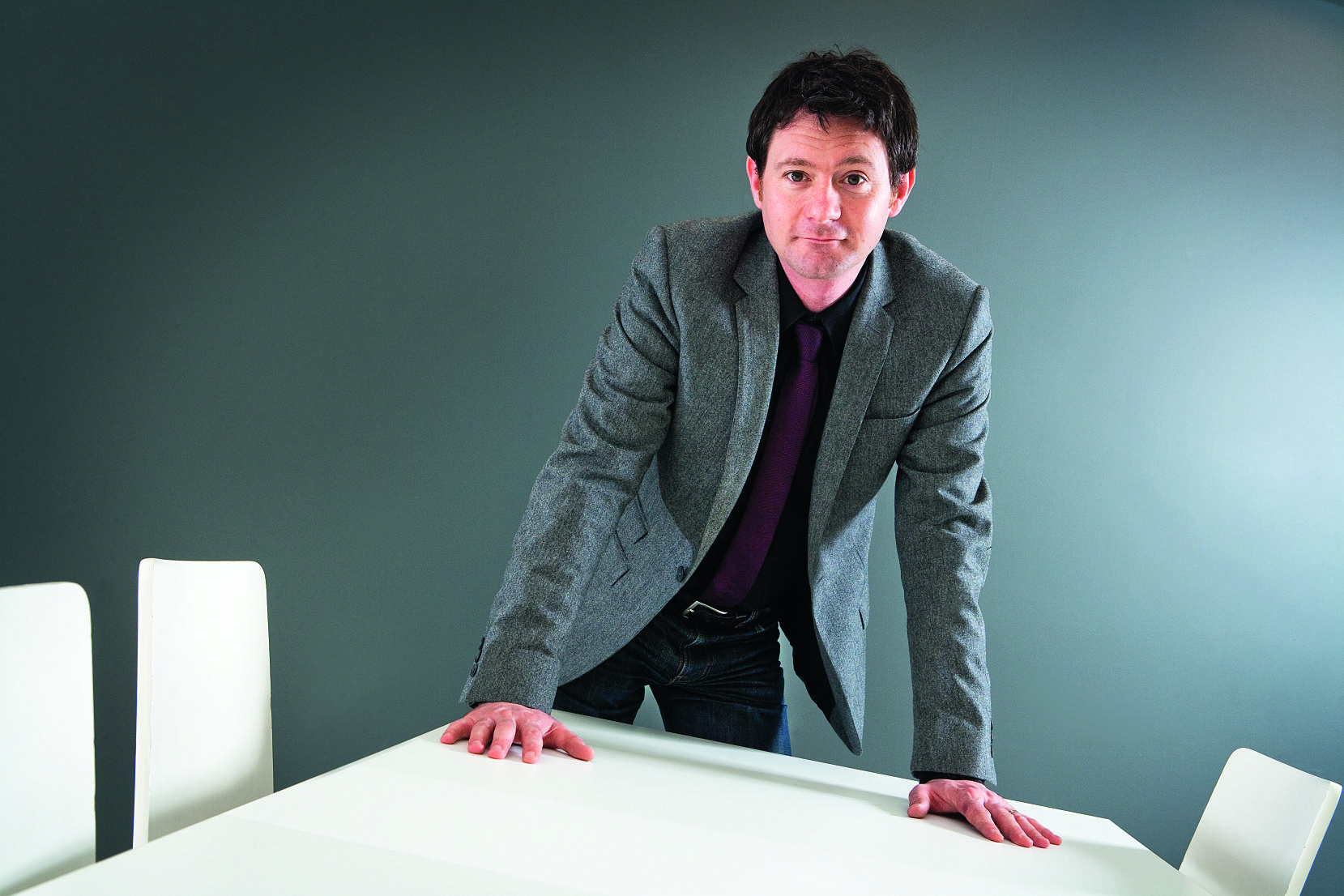 Managing the players' own social-media accounts is not part of Stopford's brief; however, he is relaxed about this. He reveals that Argentinian superstar Aguero has embraced all things digital. The striker tweets to his 1.7m followers in both English and Spanish.

Stopford comments: 'We don't actively encourage players to be on Twitter - it is up to them. But, if they want to be on social, we support them with best practice.' Not content with conquering Twitter, Stopford plans to ramp up the club's activity on Sina Weibo, the Chinese microblogging site, where it already has a presence. Unlike their English counterparts, some Asian fans are happy to switch allegiances between teams, so, fresh from its dramatic Premier League triumph, there appears to be a significant opportunity for City to grow its fanbase on that continent.

'We can publish content through Chinese social channels, such as live chats with players, which can be translated, like a TV interview,' says Stopford.

The club's digital output is not solely focused on Twitter and its Chinese equivalent, however. Manchester City has streamed training sessions live to its 3m Facebook fans and rolled out a YouTube channel offering behind-the-scenes footage, such as the 'tunnel cam', which shows players preparing for a big match.

In another pioneering move late last year, City became the first Premier League club to sign a content deal with YouTube. This afforded it control over its videos on the site and the power to manage the advertising around the content. It now creates more than 100 videos a month for the channel.

Stopford tells Marketing how the club clocked up 1600 FourSquare check-ins during one match last season. It has also tied up with the sports social TV platform Fanatix, through which fans can have live conversations with each other while watching a game.

To some football fans, however, City represents all that is wrong in the modern game, with its all-star squad, assembled at great expense by Sheikh Mansour bin Zayed Al Nahyan, its billionaire owner.

This perception has a knock-on effect on the club's marketing department, as Stopford suspects that some potential partners might increase their pricing and rate cards when pitching products and services to the club.

'However, that approach doesn't work as, being from agency and production company backgrounds, our teams are well aware of the going rate,' he adds.

Stopford has been a football fan since he was a boy and grew up just miles from City's ground. He says he still gets goosebumps when he comes into contact with the players or manager Roberto Mancini, with whom he rubbed shoulders during the post-match celebrations after the club clinched the title in May.

Like most people involved in the club, he has also had some amusing moments with 'class-clown' striker Balotelli.

'He lost a button at the end of a game, which fell off his jacket. I was looking for it. He had an entourage of button-finders. I was one of them,' recalls Stopford, although history does not record whether the button was eventually found.

Stopford joined City at the end of last year and is part of a digital content and marketing team that comprises about 20 people. He will report to Tom Glick, who takes up the new role of chief commercial and operating officer this month after moving from Championship club Derby County.

Stopford is gracious enough to admit that much of the groundwork in relation to his own role was put in place by his good friend and predecessor Richard Ayres, who still works part-time for the club as a digital innovation consultant. He also pays tribute to the work of Poke and Aqueduct, the digital agencies with which the club works.

Though his career has been varied, Stopford's stint at Manchester City might turn out to be long-lasting; he has taken the step of relocating his family to the region from London. He thinks the club, and in particular the small, independent-minded marketing team he works with, is a good fit for him and his 'entrepreneurial spirit'.

He also wants to stick around to oversee the 'tantalising' prospect of 'geeking up' City's £100m training academy, although Stopford is keeping his cards close to his chest when it comes to what this will entail.

'The training academy will offer us the opportunity to provide a centre of excellence around digital,' is all he will say on the subject.

In the immediate future, Stopford's mind is on cracking the well-documented trend of users switching from desktop to mobile.

A mobile-optimised Manchester City site is due to be launched this month.

He gleefully admits that his job has been made easier in recent times; season tickets sold out within a month of going on sale. 'We've just won the league,' he says. 'What better marketing is there than that?' 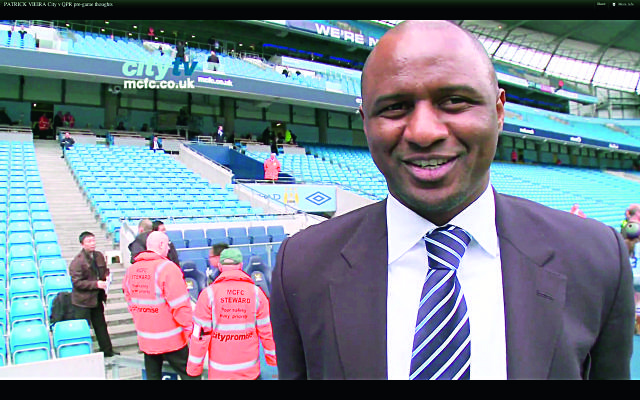 Manchester City has hosted Twitter live chats with some of its most famous players and popular figures such as club ambassador and former captain Patrick Vieira (pictured). The fans can ask questions by using hashtags such as '#askpatrick'.

Videos of the players answering the questions are then uploaded to the club's YouTube channel. Viera's session was also broadcast on ESPN.

Family: Married with one child.

And another thing: At Oxford University, he designed the student magazine, which was edited by actress Emily Mortimer.

- Conquering social networks in China and the rest of Asia.

- Keep coming up with fun, digital innovations to engage the fans.

- Not falling out with City's billionaire owners.

Mancini thanks Man City fans with press ad in the MEN

Social Media: Lifting the lid on the social brands