Market is up more than a fifth over last four weeks, Kantar data shows.

Supermarket sales in the UK grew 20.6% year on year in the four weeks ending 22 March – and this is set to result in March being the biggest month on record for grocery sales, according to Kantar.

The data company said the average household spent an additional £62.92 during the four-week period, as people filled their cupboards to prepare for an extended period of time confined to home.

Kantar said growth was driven both by people shopping more frequently and buying slightly more. The increased demand has led to patterns of panic-buying, with products including toilet paper, pasta and chopped tomatoes becoming difficult to find across the country. However, data shared yesterday by Starling Bank suggested that panic-buying was on the wane, with supermarket transactions having peaked two weeks ago.

Fraser McKevitt, head of retail and consumer insight at Kantar, said: "Retailers and their staff have been on the front line as households prepare for an extended stay at home, with grocery sales amounting to £10.8bn during the past four weeks alone – that’s even higher than levels seen at Christmas, the busiest time of year under normal circumstances.

"It’s inevitable that shoppers will add extra items to their baskets when faced with restrictions on their movement and possible isolation if one of them becomes unwell, but many families are also adjusting to having more mouths to feed."

Families with children over 16 spent an average of £508 this month, McKevitt said, up £88 from a year ago, reflecting many students returning home from university.

With restaurants and pubs closed, sales of store-cupboard items and frozen food rose 28%, while alcohol sales also shot up. "Those already missing their favourite haunts have been stocking up to recreate trips to the pub with friends over apps like Houseparty and FaceTime, boosting alcohol sales by 22% – an additional £199m in the past month," McKevitt added.

The boom in spending is set to be temporary, however. He continued: "We expect restrictions on movement and relatively full grocery cupboards will mean the incredibly high levels of shopping trips made in March will drop off over the coming weeks.

"Regular trips to smaller, local stores are likely to continue, as people avoid travelling and queues at stores with one-in-one-out policies in place. Sales of long life and non-perishable items will slow as households work their way through stocks and consumers will focus on replenishing their supply of fresh foods."

Among the major retailers, Lidl has been the strongest performer (growing sales by 17.6% over the 12 weeks to 22 March), followed by Iceland (up 11.7%) and Aldi (up 11%). Ocado, as the only online-only major player, posted growth of 12.5%. But the effects of the past month meant even Morrisons and Asda, the worst performers, enjoyed a substantial sales boost. 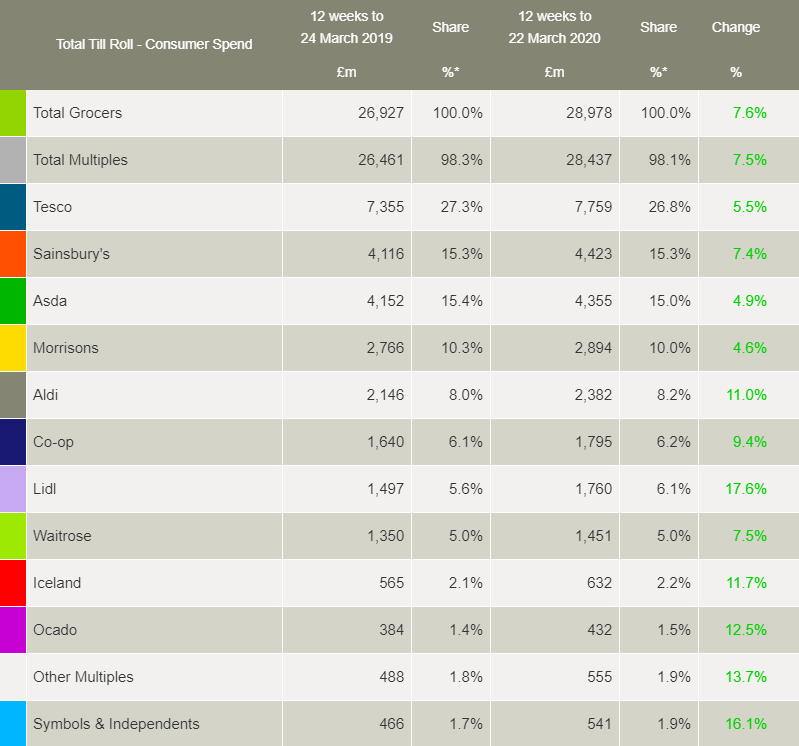 Helping vs branding: strategies that work (and those that don't)

The value of TV in the time of coronavirus