The art of quantitative prediction is reshaping business, government and even Hollywood. Data-based decision-making is on the rise all around us.

While marketers may well be forgiven for believing that big data has become a one-size-fits-all solution for any given marketing problem, advancements in analytics are, rightly, at the top of the business agenda.

Epagogix is at the forefront of this renaissance of data intelligence. By combining advanced artificial intelligence with algorithms and traditional risk-management tools, it provides Hollywood studios with insight into the likelihood of a script's success.

So Marketing asked Nick Meaney, the chief executive and co-founder of Epagogix, to take us behind the scenes to show how studios use analytics, and whether marketers can get in on the act.

"…I work for one of the biggest advertising networks in the world, and I'm fascinated by your work with major film studios identifying profitable scripts. I'd love to be able to identify advertising that's likely to win awards."

My colleagues and I smiled at the specificity of this email request. Could we identify likely advertising award-winners, when the point of Epagogix's core film services - as acknowledged by our correspondent in his opening paragraph - is to determine earning potential, assisting our movie-studio clients to make appropriate business decisions based on that critical information. They don't ask us to forecast Oscar-winners.

We wondered why the advertising agency he worked for had not instead asked the following question, which might have more value to its own clients: "Can you help identify the ads that will help to sell more products/garner more brand recognition or produce the best return on investment?"

Our new advertising chum, who turned out to be a very bright guy, had, however, made the generic connection between the movie world, where Epagogix plies its core services, and the field of marketing, where individuals with creative duties and those with commercial responsibilities are also compelled to find satisfactory ways to work together to please clients, audiences ... and themselves.

Epagogix is a company that helps US film studios and international independent producers to make critical decisions in the film-making process.

Feature-film-making expenses and the costs of US theatrical distribution and promotion have grown so high that some of Hollywood's most senior management figures seek objective, external advice regarding which scripts are going to be hits. We help the studio determine whether a given script warrants the allocation of its capital, regardless of the script's provenance, and how it might maximise returns from the movies in which it does invest.

Our company is able to provide movie-industry clients with accurate forecasts of North America box-office takings. We work with scripts, before large amounts of finance are invested in the production. We use our own proprietary expert process, combined with custom-built neural networks, to forecast the likelihood of success.

Neural networks are cutting-edge artificial intelligence - think souped-up computer-enabled algorithms. Each is bespoke, developed from historical data unique to the situation under analysis. They are able to crunch vast amounts of information and identify trends and patterns that, typically, would elude human analysis - and, if expertly programmed with reliable historical data, they are able to predict future outcomes. Neural networks are used in many sectors, particularly in banking and finance, but also in logistics, pharmaceuticals and beyond.

This risk-managed approach to producing films is also of increasing interest to those involved in feature-film financing - an area simultaneously appealing as a non-market-correlated investment asset, and off-putting because of the risk involved and litany of past film-investment failures.

Epagogix grew into this niche in big data partly from our origins in the City of London. Working for a big risk-management company, I had noticed that there were opportunities for deploying artificial intelligence to better understand the huge amounts of data in relation to the risk and insurance industry.

Separately, I learned that the risk-management techniques provided to the Hollywood feature-film sector were mostly concerned with slate finance and basic insurance coverage, and not with the fundamental and critical underlying issue of ensuring that each individual film project deployed the most effective scripts, with production budgets appropriate to their commercial value. Significant commercial benefits would be possible if the studios were better able to identify and avoid profit-sapping "turkeys".

So, to leap well ahead, with a small group of talented and well-connected friends and colleagues from risk management, law, banking, artificial intelligence R&D and media programming and consulting, we built Epagogix's team, processes and product to address this perceived opportunity.

Then, we hit the sales trail in Hollywood. Our very first pitch was to a studio where the UK and Europe managing director had been impressed by forecasting tests that we had undertaken for him. We arrived at the LA studio garlanded in plaudits from the London office, expecting to meet the group chairman.

Instead, we were confronted (I choose the term carefully) by a veteran studio legal counsel, whose opening gambit was blunt: "If you guys think you're so smart, how come you haven't made any movies yourself? Why not come back and talk to me when you have."

An investor accompanied us to our LA meetings to demonstrate that financiers liked our approach, and that we were prepared to put our "money where our mouths were" with some modest co-investing. The studio counsel was unimpressed, saying: "You've got $50m to co-invest in movies that these guys identify as sufficiently profitable? What do I care - there's plenty of stupid money in Hollywood already." This was 10 years ago.

The puritan in me was shocked by this, literally, selfish view of business. My financial colleague was worldlier, however. "If that kind of dysfunction is typical, objective guys like us should do really well in this town," he declared.

Fortunately, the second studio we visited had a far more welcoming approach to our offering. Its chairman saw that we fitted right into the evidenced decision-making approach he championed in the face of the "feelings", "gut instincts" and Oscar-hunger that frequently influence Hollywood opinions. 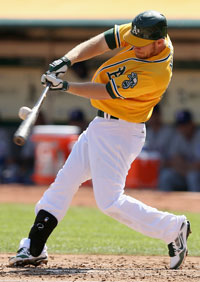 In particular, the chairman in question had recently invited Billy Beane, the hero of Michael Lewis' book Moneyball, to talk to his senior studio executives about how he came to embrace data-based evidence methodology to build a successful baseball team. This, despite fierce opposition from his own team's industry-steeped, expert advisers, who had very different, ingrained ideas about what constituted the key success factors in achieving baseball success.

In a movie sector often accused of over-reliance on relationships and the "vibe during the meeting", this chairman was eager to find hard evidence to help support the daily decisions he was required to make before committing millions of his studio's dollars to development and production.

After undergoing trials and tests to ensure our box-office forecasting accuracy, Epagogix entered a retainer relationship with this major studio, which endures to this day.

Sometimes we are used to assist with binary decisions - "shall we buy/produce this script or not?" - but more frequently we are used, in the chairman's own words, to "help the team to make better movies".

The chairman himself requested that we expand our offering from the box-office forecast, so we now provide analysis of the areas of scripts that score less than optimally and suggest how, and to what degree, they might increase the aggregate value of the work.

So how can this approach help marketers? Back in London, several exploratory meetings with the ad agency took place. We candidly explained that we were unable to predict advertising award-winners. Although our expert process does lend itself well to analysis of the components of a TV ad, volumes of consistent historical data are needed to create neural networks that could predict measurable future outcomes.

This task is much harder still to accomplish if the outcome required is a panel-selected award. Since award panels have a relatively small and changing membership, the data about past selections is from too small and volatile a pool, and isn't as consistent and broad as the data relating to ticket-buying at the US box office.

How about other more-measurable success metrics that we might build a neural network around - such as actual sales results? It seemed that, at that time, there was only limited ability to clearly map ad broadcasts through to sales results. Marketing campaigns typically are conducted over lengthier periods than the time-limited event of a theatrical film release, which further hampers gathering the clear measurements required.

At one intriguing meeting I was the sole Epagogix representative with a dozen senior advertising and marketing group creative executives, and I played devil's advocate.

We talked about the lack of an accessible advertising-to-sales success metric. Ignoring the received wisdom of "sales overnight, brands over time" for a moment, I wondered aloud what those assembled at the table would think if better performance data of this kind were available to the agency - which surely it could be if the clients were able to share more sales figures.

How, then, might the group respond, should such (hypothetical) metrics demonstrate that crude "Crazy Eddie - Discount Sale!"-style ads were more effective in generating sales than more nuanced and sophisticated advertising fare? (Disclaimer: I have no knowledge that any hypothetical metrics would produce such a result.)

One of the senior creatives responded: "If you could demonstrate that those kinds of ads were the most effective, then we would leave the agency."

Almost every head nodded in agreement - a very measurable metric.

I want that book! Could Amazon get you the latest launch on the same day?

Seven steps to conquering the art of mining big data