The biggest gaps, according to research from the World Federation of Marketers, are in the segments of ecommerce and shoppable media, with no respondents satisfied with their performance.

Despite spending significant time and money in upgrading their media strategies, some of the world's biggest advertisers appear to be struggling to meet their aspirations on this front, new research from the World Federation of Advertisers (WFA) and Ebiquity has revealed. The biggest gaps among the 52 advertisers polled were in the segments of ecommerce and shoppable media, with none of the respondents satisfied with their performance in these categories.

Some of this dissatisfaction may reflect the fact that only 28% of media and marketing teams own the budgets for shoppable media formats. Another area of concern was in media measurement, attribution, and market-mix modelling. A full 94% of respondents said they believe this area will be very important or important over the coming years. This gap shows that the age-old question of 'what works' has not been solved by the advances in digital technology, and the degradation of third-party cookies only enhances the challenge.

Overall, the five key areas where many are struggling include ecommerce and shopping, finding the right balance for in-housing and partners, managing the challenges of environmental, social and governance agenda as well as the more long-term challenges of measurement and transparency. For The Capability Gap, the interviewers talked to 52 global media leaders, representing advertisers with a total ad spend of more than $40 billion globally. Respondents represented multiple industry sectors including alcohol, automotive, financial services, FMCG, healthcare, luxury and technology.

For media leaders, the challenge is to not just improve poor performance on these metrics but also manage widening remits for leaders. According to this report, leaders are being challenged to not just place investments that deliver a positive ROI for the brand, but also to consider whether these are the right choices for the environment, consumers and society at large.

Some progress, but a long way to go

“This report shines an important light on the discrepancies between where many advertisers say they are versus where they want to be," said Matt Green, director of Global Media Services at the WFA. "It is not surprising that there are capability deficits in areas such as ecommerce, shoppable media and ESG, which have come under such focus in recent months."

Mark Gay, chief client officer at Ebiquity, added: "Issues such as the shift in emphasis from efficiency to effectiveness, diversity and responsibility in media models, the ongoing challenges with transparency, agency selection in a remote, agile, and often virtual world, governance of data and management of technology all require the global marketing community to adopt and flex new skills. All major topics in their own right that collectively challenge brand’s internal and external operating models." 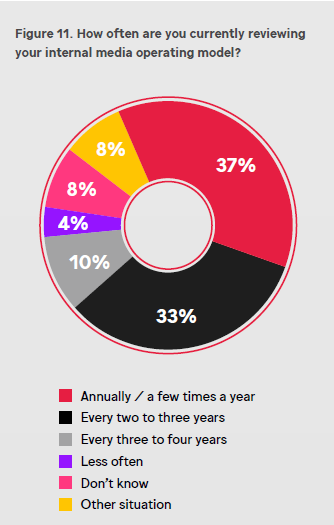 Breadth and depth of skill is required in this environment and all media leaders agree that being ‘T’-shaped, not specialised, is critical to survive in the global media role today. Team sizes are expanding, and the WFA finds that global teams have increased by around 60% compared to the previous survey conducted on this theme (in 2017). As they seek to improve the performance of their media investments, marketing leaders are conducting more regular reviews: 37% arelooking at it either annually or more frequently, while a further 33% are doing so every two to three years.

‘Everything is intense’: six new trends shaping adland for the rest of 2021