Brand chiefs saw their marketing budgets flatline in the second quarter of 2019, after the previous quarter showed a temporary blip of optimism, according to the latest IPA Bellwether Report.

While 2019's first quarter saw a net balance of 8.7% marketers declare that their marketing budgets had increased – a surprising though not unwelcome anomaly – the latest figures show a 0% balance of marketers recording growth. Even as 20% of the IPA's panel members reported greater marketing spend during the three months to the end of June, that figure was offset by 20% cutting spend, while the remaining 60% said budgets were unchanged since the first quarter. 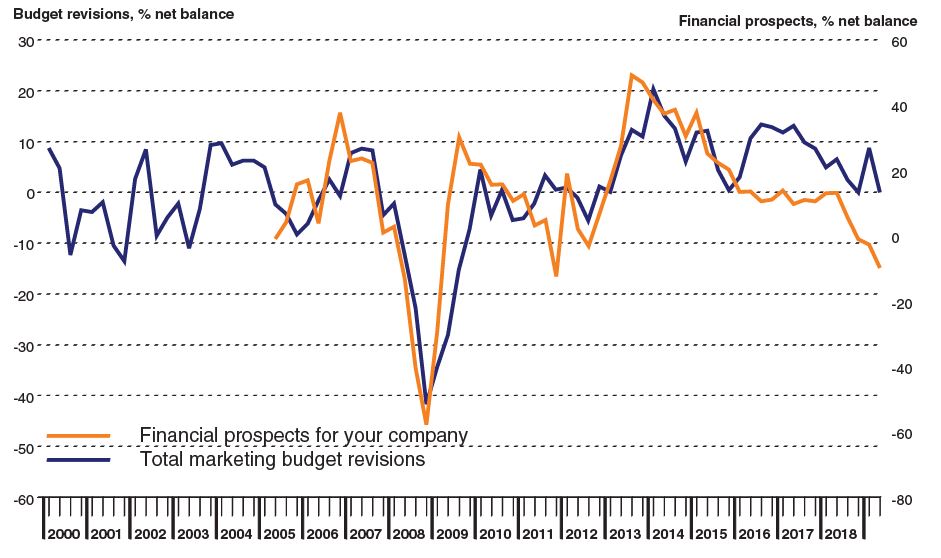 In what appears to be a continuous negative narrative, Brexit, the disarray within the Conservative Party and economic uncertainty were cited as reasons that the business environment is so challenging.

Insecurity is fuelling hesitancy and delayed decision-making among clients, the IPA said, and its panellists expressed worries that it was a sense of malaise that is equally affecting consumer confidence and consumption.

Businesses also raised concerns around overseas influences, such as trade disputes and weak growth in markets such as continental Europe and Asia.

Main media ad budgets also received a boost, thanks to some companies investing in big-hitting brand-building campaigns. A net balance of 5.6% of companies reporteed an increase, up 0.1 percentage point on the previous quarter. 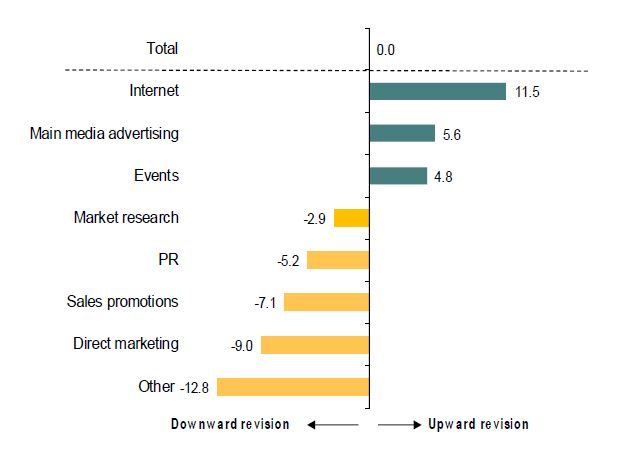 Events budgets also experienced growth, with a net balance of 4.8% reporting growth in the second quarter compared with 3.4% in the prevous period. This marked this category's best performance since the first quarter of 2018 and was in line with forecasts made earlier in the year.

Faring less well, market research spend was cut back for a 16th consecutive quarter, with a net balance of -2.9%, although that is an improvement on the first quarter's -4.2%. Sales promotion suffered its second successive downturn at -7.1% in the second quarter, from -3.7% in the first three months of the year.

The worst performer was direct marketing, with the net balance falling to its lowest point in more than 10 years to -9% from -3.5% in the first quarter.

Just over a third (34%) of marketing executives reported a pessimistic outlook for their finances across their industry, with a mere 8% reporting being optimistic. The resulting net balance of -25.6% was the second-most negative assessment since the fourth quarter of 2011, but not as bad as the -28.6% in the final quarter of 2008.

Paul Bainsfair, the IPA's director-general, said: "Between Boris, Jeremy and Brexit, coupled with a dip in consumer confidence, it is perhaps no wonder that this quarter’s Bellwether shows zero growth to overall UK marketing budgets. Until a clearer political and economic path is outlined, the vast majority of companies are in stasis.

"It is reassuring to see, however, that some companies are revising up their investment in main media advertising; this is where they will build the longer-term growth of their brands, which is crucial to weathering these tougher times."