You (mostly) love your jobs, and you're even getting paid a bit more to do them, finds the latest survey of marketers' salaries. By Jane Simms.

The tone of this year’s Marketing Rewards salary survey is one of cautious optimism about pay, conditions and promotion prospects in the sector, mirroring signs in the broader economy that we are finally recovering from one of the lengthiest recessions in history.

Adjusted for inflation, average salaries have not moved much, yet the number of pay freezes has fallen, workload has reduced, and levels of job satisfaction and confidence about job prospects are relatively buoyant.

"Marketers seem to have adjusted to ‘the new normal’," says Thomas Brown, associate director, research and insights, at the CIM, which carried out the survey in May and June in collaboration with Croner Reward. "We won’t revert to the pre-recession days of big teams and big budgets, but sentiment is more upbeat than it has been for a long time.

"People seem to have accepted the new reality that they have to be adaptable and achieve more with less."

Marketers seem to have adjusted to ‘the new normal’.

The proportion of marketers receiving no increase fell from 22% in 2012 to 20%, and for those marketers who did get a rise, the average was 2.6% (compared with 3% last year).

However, these averages hide interesting differences between region, function, sector, discipline and job level. The North West, for example, seems to be a good place to be a marketer.

Just 14% of marketers in the region were hit by a pay freeze. In addition, bigger pay rises come on top of average salaries that are 8.2% higher (at senior marketing manager level) than those in London and the South East.

Over the past decade there has been significant investment in the regeneration of the North West, which is home to several globally renowned football clubs, major retail head offices and now one of the main production centres for the BBC.

"The BBC’s move to Salford Quays has really put Manchester on the map and boosted its appeal to the marketing sector generally," says Vivienne Copeland, head of Croner Reward.

"But to attract good people from what’s been seen as the marketing-expertise hub of London and the South East, employers in the region have had to offer very competitive salaries."

Across the country, basic salaries both for marketing directors and heads of marketing have risen by above the average 2.4%. It was junior managers, though, who commanded the highest percentage rises this year, with base pay up 5.3% to an average £30,000.

Copeland explains that the "junior manager" level encompasses many technical-specialist roles, including the web and digital expertise that is in such demand by organisations and in such short supply at more senior job levels. Salaries reflect this discrepancy.

However, Simon Carter, marketing director UK and Ireland at Fujitsu, argues that although digital competence is growing in importance as a prerequisite, in isolation it does not explain the disproportionate rises at this level.

He says: "Junior managers earn less to start with, so it is easier to motivate them with a 5% rise than it is more senior people. What’s more, as we emerge from recession, this group is highly mobile and you don’t want to lose them.

Business has tried to reduce its salary bill over the past few years and got rid of some of the more expensive people, so there is room for more junior people to show what they can do, and you need to encourage them to push through."

While heads of marketing continue to command higher basic salaries than their peers in the IT and HR disciplines, they still fall behind finance and sales – indeed, sales trumps marketing at every job level. 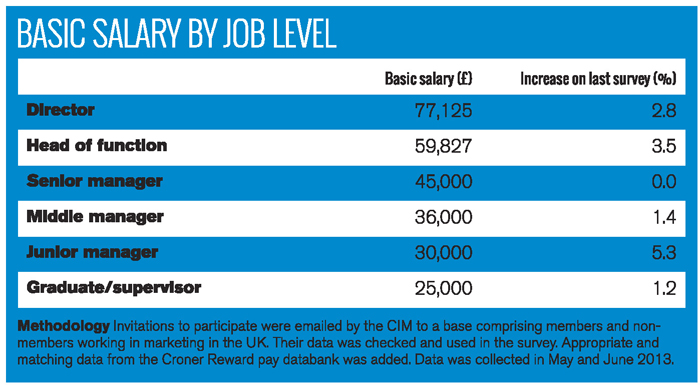 The differential between sales and marketing is predictable, believes Carter, "certainly in a period of growth", although he is surprised at the 4% difference ("that seems a bit high") in salaries at "head of" level. Nonetheless, he adds, while commission boosts the take-home pay of Fujitsu’s sales people, their base salaries are slightly lower than those in marketing – even in a business where sales is "our life blood".

Pippa Hainsworth, managing director of executive search firm Philippa Hainsworth, believes the relatively high salaries in sales are "inevitable, because of the intensive focus on commercial results we’ve seen over the past few years".

The CIM’s Brown agrees, noting that a head of sales typically has profit and loss account responsibility and manages a sizeable team. Finance people get paid more, he adds, because, unlike marketers, they need a qualification to practise and are subject to intense regulatory scrutiny. What’s more, CIM research shows that 50% of marketers enter the profession late, whereas most accountants choose finance as a career path from the outset.

The bad news for marketing directors is that the gender pay gap has widened to 12.5%: men earn on average £10,000 more than their female counterparts at this level. It’s little better at head of marketing level, where men are paid £5000 more than women – a difference of almost 8.5%.

Hainsworth finds this "unsurprising". She concedes that it may reflect the lack of experience of female board members, who are still in a minority, and the high concentration of women in the relatively low-paid PR sector. However, she believes the gap is also linked to women’s lack of confidence in pushing themselves forward and asking for a pay rise.

"Men are quite happy to blow their own trumpets and admit to being ambitious, but women don’t like coming over as ‘pointy-elbowed’," she says. "And although it’s a generalisation, men tend to have an eye to promotion, whereas women immerse themselves in the job and are more interested in things like working environment and work-life balance than big pay rises."

Marketers in the manufacturing industry have enjoyed particu­larly healthy pay rises this year.

Natalie Cowen, head of marketing at rail operator East Coast Mainline, says: "Let’s hope this is the explanation for the gap, rather than gender bias. But I do agree that doing a good job and enjoying it is very important to women. After all, if you’re doing a job purely for the money, you are likely to make bad decisions."

Marketers in the manufacturing industry have enjoyed particu­larly healthy pay rises this year, reflecting a pick-up in big sectors such as automotive and house-building as well as small, dynamic technology firms. Not surprisingly, 85% of marketers in manufacturing reported "fair" to "excellent" job satisfaction. The CIM’s latest quarterly Marketing Confidence Monitor survey backs up this finding. "Manufacturing has come out much more strongly than we had anticipated and is much more upbeat than other sectors, and pay reflects that," says Brown.

By contrast, marketers in the beleaguered public sector are faring less well: 38% of marketers in the sector had their pay frozen this year and the average rise among those who did get a pay increase was just 2.4%. Twice as many public-sector marketers as in any other sector felt that their jobs were insecure, and their promotion prospects were the lowest. Forty-four per cent of public-sector marketers, compared with the average of 38%, are looking to move. 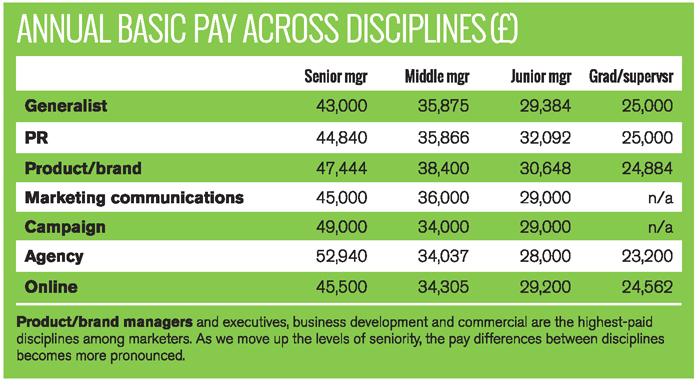 Helen Moss, senior manager, Hays Marketing, says: "The public sector is interesting. More jobs have been registered in the public sector over the past six months than over the past two or three years, but they are all for short-term contracts. Clearly, the changes in the sector mean the need for talented people is greater than ever, but they can’t get sign-off for full-time appointments. Ironically, they may have to pay more for these short-term roles."

There is more cross-fertilisation now between different parts of the public sector and the private sector, in order to bring in new skills – not least commercial nous, adds Moss. "This is another reason for salaries holding up as well as they are."

Overall, a lower proportion of people this year (78% versus 85%) feel their pay is in line with or above the market, but 76% feel they have at least some promotion prospects – up from 62% last year – and nine out of 10 have "fair" to "excellent" job satisfaction. Thirty-eight per cent are actively looking to move job, but the main reason, cited by 41% of these, is lack of promotion prospects in their current company. Only 16% cited "low salary" as a reason.

The CIM’s Brown says the 38% figure is in line with what he would expect, even in better economic times. "Marketing is a dynamic profession where staff turnover is generally recognised to be higher than in other disciplines because of the need to gain experience in different companies and sectors," he points out. 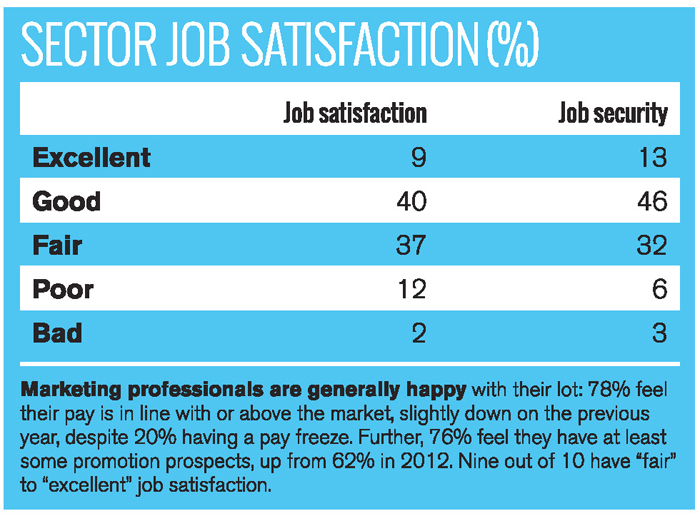 There is a clear message for companies wanting to hold on to their marketing talent to help them take advantage of the upturn. It seems that constrained pay budgets are now accepted: what marketers are looking for are new experiences and opportunities to develop themselves and their careers.

"There is a new sense of realism," says Hainsworth. "People realise that job satisfaction is about more than money."

East Coast Mainline’s Cowen, who joined the company in November 2012 from First Direct, shares this sentiment. "There is definitely a more positive feeling at the moment: people are happier in the roles they are doing and the skills they are being able to develop," she says.

"I have been very impressed by the learning and development opportunities here – not least to learn about different parts of the business, which really helps marketers to become more effective."

Fujitsu’s Carter adds: "Where you can’t give pay rises, you have to motivate, retain and attract through other means, and we have increased our training budget significantly over the past 18 months.

Our churn is very low for the sector, but it’s also important for the business to keep marketing skills up to date. It’s a win-win."

Marketers' salaries up £3,000 but bonuses down, claims study

Why marketers must stop confusing price with value

The colour of the money: five trends in marketing pay and rewards

How to ... motivate staff if the salary pot runs dry