While economic uncertainty continues to dog the business environment, this year's Marketing Rewards survey finds that salaries and job satisfaction in the sector are rising.


It's a subject we all want to know about, yet few will talk about. How much are you paid compared with your colleagues or contemporaries in another business?

This year's Marketing Rewards salary survey paints a more optimistic picture than many would expect. Salaries and job satisfaction are rising, and the gap between men and women's pay has narrowed.

According to Vivienne Copeland, head of Croner Reward, which carried out the annual survey in May and June, in collaboration with The Chartered Institute of Marketing, these findings suggest that the worst of the recession could be over. 'The survey points to higher confidence in company performance and the economy as a whole,' she adds.

From the total data on 4932 jobs, which included 2776 marketers responding directly to the CIM survey, the average salary rise was 2.5%, as in 2011. However, the number of respondents with pay freezes fell from 26% to 22%. What's more, the average pay for a head of marketing outstrips that of the heads of IT and HR.

When it comes to the gender pay gap, the difference is now noticeable only at director level, but even there it has shrunk from 16.3% last year to 2.7%. In other levels of seniority, women now earn the same or even more than men.

While the headline results mask variations by rank, region, discipline and company size, Copeland believes the survey findings reflect a new mood of optimism. 'Organisations seem to have recognised that the uncertain economic climate is here for the foreseeable future, and now that they have cut back as far as they can, they need to start trading their way out of recession,' she says. 'Marketing budgets may have shrunk, but that makes marketers more essential than ever, and creative marketers who augment their traditional skills with the kind of digital skills that can stretch marketing budgets further are in demand.' 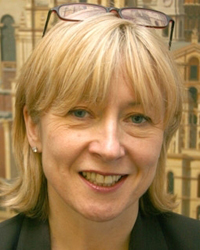 However Breffni Walsh, interim marketing director of Musgrave Retail Partners GB and former Pets at Home marketing boss, warns that these rare hybrids, who command premium salaries, may not be all they seem.

'When you've hired "digital specialists" you often realise they learned their skills from textbooks,' she says. 'My advice would be to hire on attitude and intelligence; the rest can be taught. The marketers who were great in the 80s are still great because they know the "answer" isn't digital; it's understanding consumers.'

Marketers are stepping up to the plate and developing new skills, not least in the digital sphere. Such development and job satisfaction are linked, says Copeland.

Nine out of 10 marketers surveyed said they have 'fair' or 'excellent' job satisfaction, compared with eight out of 10 last year; 85% feel their pay is in line with or above the market, up from 83% last year, despite 22% having suffered pay freezes.

The reason for this level of satisfaction, Copeland believes, is the opportunities the recession has afforded to take on additional responsibility. 'That also, of course, makes them more marketable,' she adds.

For similar reasons, perhaps, 58% of respondents believed training and development were just as valuable as a pay rise.

Helen Moss, senior manager at recruitment firm Hays Marketing, has witnessed a rise in internal promotions. 'Companies are re-evaluating marketing jobs and adjusting salaries to keep good people. They are also "adding value" to jobs, with more focus on aspects like flexible working, career paths, training and development. Personal development is increasingly important to individuals, and that benefits their employers.'

As Sheila Mitchell, marketing director at the Department of Health, points out, the public sector has been attracting more people from the private sector. It is two- way traffic, however. 'I know a lot of good people in the public sector who are now moving back into the commercial world,' she adds. 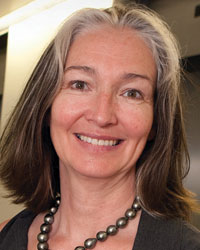 Overall, it seems, a silver lining of the recession is now becoming apparent. 'Businesses are looking to marketers to help them find ways to grow in a different economic climate from the one many are used to, and the resulting debate, innovation and skills development are stimulating the profession,' says Daryl Fielding, former vice-president of marketing at Kraft Europe.

In addition, as people are less inclined to seek new jobs at the moment, relationships within the company are more stable. 'That fosters trust and teamwork, which have a very positive effect in a recession,' she adds.

Pete Markey, chief marketing officer at RSA Group, believes this stability will do much to enhance the reputation and credibility of marketing. 'If marketing directors stick around long enough to see the results of what they do, that's good for everyone.'

In fact, the report gives plenty of reasons for cheer. The demand for customer-focused marketers who can offer potentially transformational insights is not only helping them to command higher salaries and a voice in the boardroom, but, as Markey says, is also 'putting marketing back in the driving seat'. 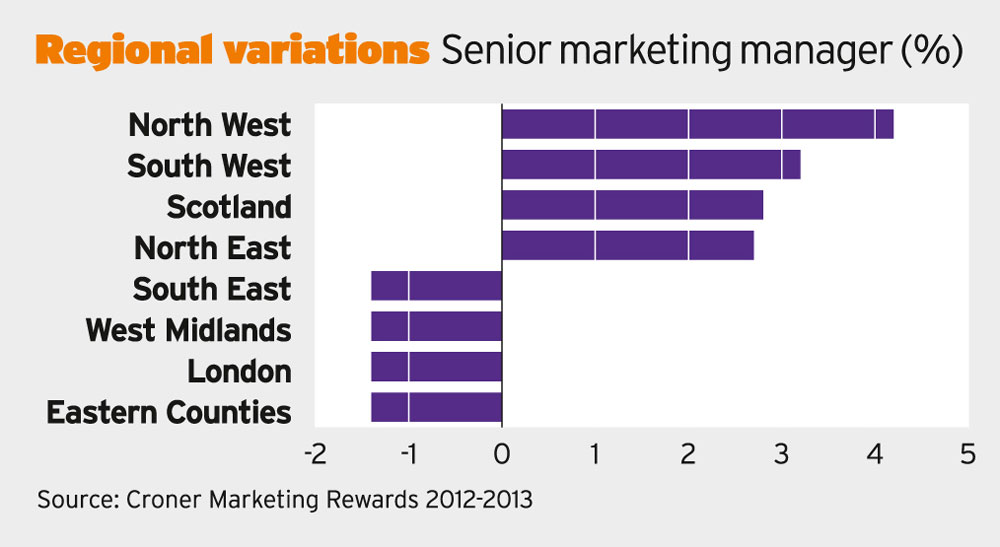 The CIM's David Thorp says: 'The traditional mindset has been to go to London to further your career. Depending on what the research tells us next year, whether this is a blip or a trend, we might need to rethink that.'

'I loved the place, but the reality is that the best creative talent is in London, and organisations have to woo marketers with high salaries to work elsewhere, because they find themselves, as I did, shuttling up and down constantly. You want the best talent on your doorstep, and as yet there is no critical mass outside London. The arrival of the BBC in Salford might help create a hub of talent, but it will take a few years.'

At head of marketing and senior manager level, women earn slightly more than men, while at middle and junior manager level and graduate/supervisor level, pay is equal. Male marketing directors earn 2.7% more than their female equivalents, but the gap has narrowed from 16.3% in 2011. According to the Office for National Statistics, the gender pay gap nationally is 17%.

The dramatic improvement might be partly explained by the fact that this year's survey had twice as many female respondents as males. 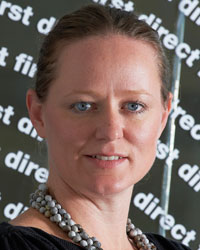 Natalie Cowen, head of brand and communications at First Direct, says: 'I can see why discrepancy creeps in at director level. Pay reviews are tied to performance management. If you are on maternity leave, you are given an "average rating": this determines your maximum salary, with bonus awarded pro rata. You fall behind men who have not interrupted their careers.'

Cowen suggests that parity lower down might be linked to frequent job moves: marketers are well aware of their worth. She believes parity will eventually infect the very top level, too.

David Thorp, director of research and professional development at the CIM, agrees, but warns: 'What is of more concern is the dearth of female chief marketing officers.'

The split of marketing director respondents to the CIM survey was 51% women, 49% men – but that doesn't reflect reality, adds Thorp. 'CIM membership comprises 50% men and 50% women, but at marketing director level men outnumber women four to one.'

To collect the data for this year's Marketing Rewards, invitations to participate in the survey were emailed by The Chartered Institute of Marketing to a base of 46,437 contacts comprising members and non-members working in marketing in the UK; 2776 responded. Their data was checked and used in the survey.

To this body of data was added appropriate and matching data from the Croner Reward pay databank, taken from Croner Reward's other surveys. The total data analysed in the survey was 4932 jobs from about 2000 organisations. The data was collected in May and June 2012 and the survey published in September 2012.

Marketers' salaries up £3,000 but bonuses down, claims study

Next promotes top marketer Jane Shields to the board

The colour of the money: five trends in marketing pay and rewards

Will Harris: The truth about lying in salary surveys

London marketers' pay now 'among lowest in the country'

Why PRs are gatecrashing the marketing party