The illustrator was behind Bodyform's 'bathroom takeover' as part of the 'Viva la vulva' campaign.

I feel a bit weird being an ambassador for vulvas. But there is still this aura of shame that surrounds them. Bodyform’s "Viva la vulva bathroom takeover" campaign aimed to tackle the penis graffiti that is visible in bathrooms. But for me, that was always a secondary thing. The more important aspect of it was the fact that it encouraged body positivity.

It’s interesting to start a conversation about where that embarrassment and shame come from and who profits from it. There is a massive cosmetic and beauty industry that benefits from the embarrassment and shame. If the campaign can bring about this message that any kind of vulva is OK, and you shouldn’t be made to feel uncomfortable about it, then the work will have done a good job.

There’s always been a female figure in my work. I like to explore my own womanhood and experiences. After this commission, I’d be interested in exploring what it means to be a woman from other viewpoints as well. 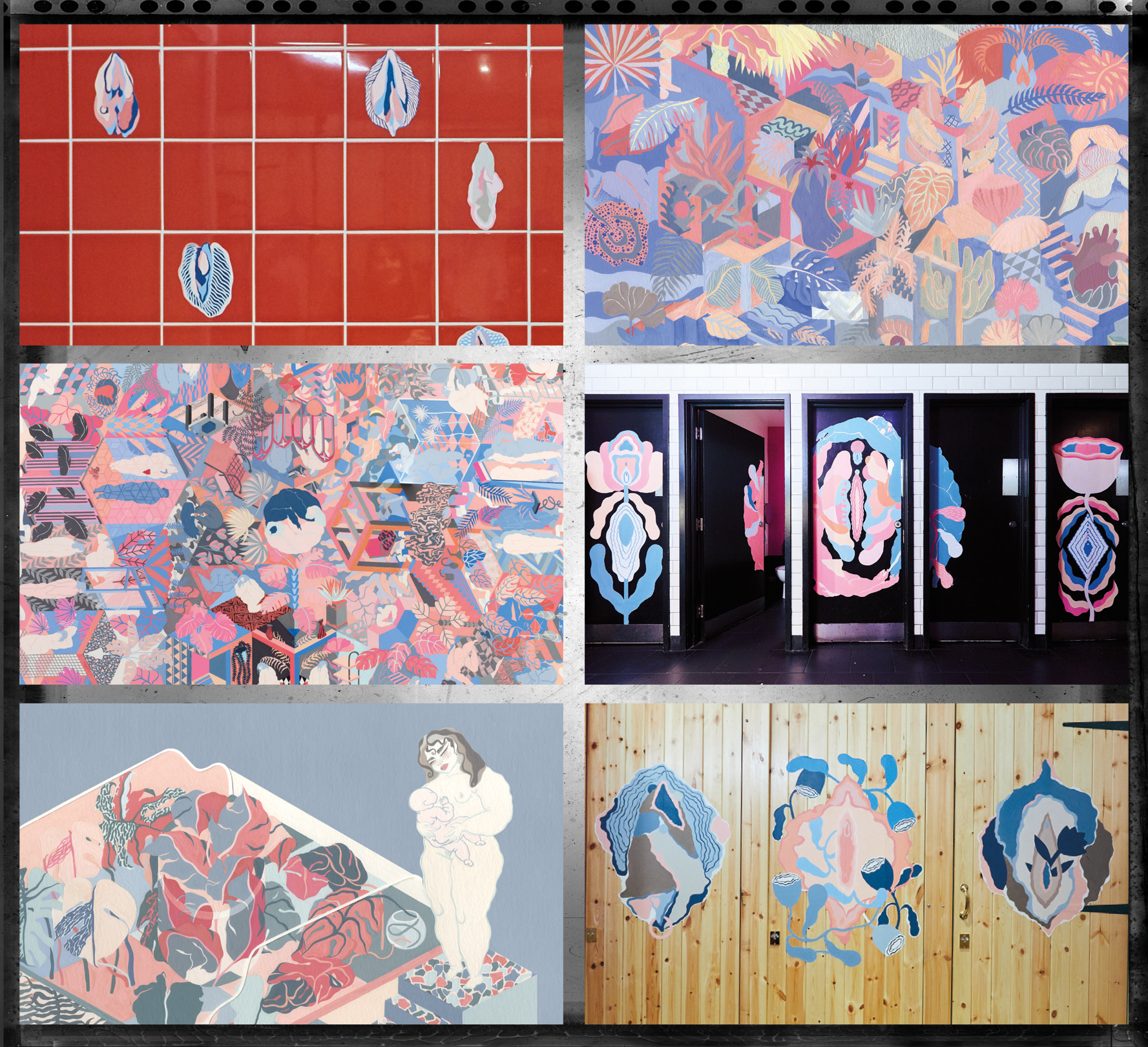 Where I am now has been a very slow process of elimination. Earlier on, I was quite academic and good at maths. But academia and maths made me very sad, because they can be quite frustrating. I never got the same satisfaction solving an equation as I did coming up with a creative solution. I have a mathematical approach to the way I work and construct imagery. If it’s complex, I try to approach it like a problem-solving exercise.

I go through the same process every time I get a brief: I highlight the areas that I could turn into visual outcomes, and then I make loads of written lists and thumbnails. A lot of the initial work I do happens in my head and there’s not much to show for it on paper. Then I have to pull myself out of planning and just sit down and paint. It comes together as I go.

Both my parents are Polish and I was born in Poland. It has definitely influenced my art. When my parents moved to the UK, attitudes towards immigrants were lukewarm at best. For a while, being Polish was something I tried to play down. I came here when I was 11 and never had an accent, so I didn’t have to admit I was Polish if I didn’t want to. In recent years, I have taken it upon myself to bring out that side of my heritage and use it in my work. I became more interested in exploring my Polish side when the Brexit conversation started. I’m not a British citizen, so it was a conversation that very much had an impact on my life but one that I didn’t get much of a say in.

I’m quite into Polish folklore and these little cultural references that are familiar to everybody. I’m nostalgic and I want to keep exploring these things. But I might ditch the Brexit side of immigration for a little while because it’s not the happiest subject.

While my work is personal, I’m still not completely comfortable putting everything in plain sight. The painting I completed in my final year of university was my way of digesting all my experiences since moving to the UK.

That’s what illustration has become for me – a coping mechanism of sorts, a way of taking in everything that’s going on around me and trying to understand it by putting it on paper.

Sometimes my subjects aren’t very happy but I like the fact that when you first look at my painting, it is colourful and aesthetically pleasing, regardless. If you want to, you can look into it more deeply but you’re not burdened by the fact that this beautiful picture talks about my experiences as an immigrant. You can be as involved as you like.

Oliwia Bober is a Polish-born illustrator, based in Brighton. Her projects have been influenced by Polish folklore, Brexit, immigration and the female form. Most recently, she created Bodyform’s "Viva la vulva bathroom takeover", which illustrated London loos with paintings of female genitalia in an attempt to reduce women’s shame about their bodies.

Heist asks whether shapewear can be feminist in new campaign

Combating the 'wasted years' of childhood for our industry's future

Nigel Farage exclusive: 'Advertising? I might fancy it myself one day'