UK adspend will grow 18.2% this year, giving a total market size of £27.8bn, according to the latest Advertising Association/Warc Expenditure Report. That would be the largest annual growth on record, overtaking 1988’s growth of 15.9%.

The growth rate is an improvement on the 15.2% predicted in the last AA/Warc forecast in April, and means the ad market will be almost 10% bigger this year than it was in 2019. The forecast includes an increase in the second quarter of 54.7% year on year, which the AA/Warc said was by far the biggest increase on record for a quarter.

While 2020 brought varying levels of pain for different media channels – with out of home and cinema particular badly hit – the new data has some good news for all. Every media channel is set to grow by at least double digits this year, ranging from 10% growth for direct mail to 315.6% for cinema – although in both cases, this will not be enough to make up the spend lost in 2020. 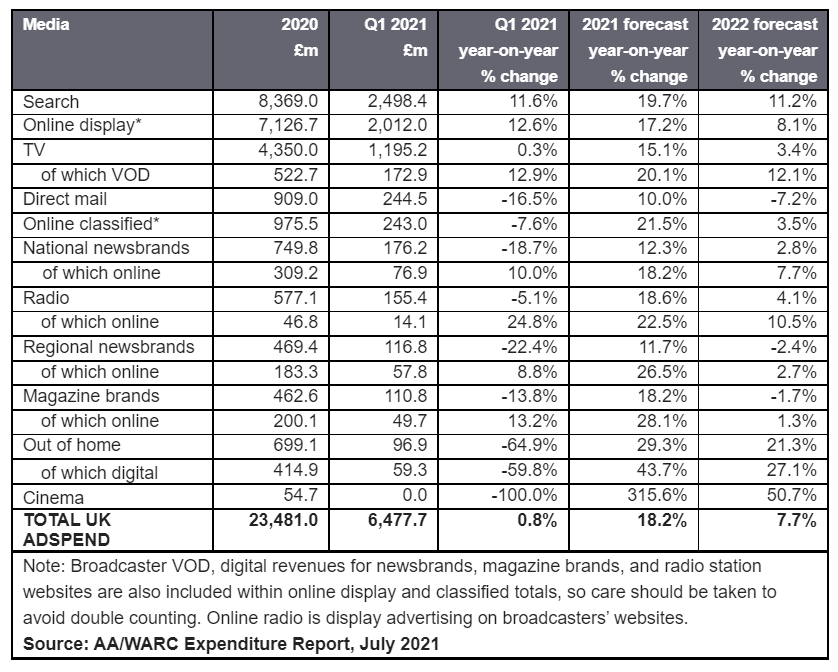 After continuing to grow in 2020 (by 11.6%) despite the economic upheaval of the Covid pandemic, the biggest channel, search adspend, will rise this year a further 19.7%, taking its value past £10bn.

Two other channels that grew last year – online display and video-on-demand – are also set for further significant boosts in 2021, up 17.2% and 20.1% respectively.

Stephen Woodford, chief executive of the AA, said: “Advertising is a vital engine for growth, with each £1 invested in advertising delivering £6 back to GDP. The upward growth revision in spend growth this year – to reach a record of 18.2% – would mark an exceptional recovery, after the record declines in 2020.

“UK adspend growth also looks set to race ahead of European markets, reflecting the success of the vaccine rollout and fast-rising corporate and consumer confidence.

"The UK is the global hub for advertising and will also benefit from faster growth in major export markets for UK advertising services.

"If the AA/Warc expenditure estimates turn out as forecast, then the ad industry will contribute strongly to the nation’s economic resurgence this year and into next.”

In a joint article this week for Campaign, IPG's Mark Lund and Richard Morris argued that advertising's rapid rebound from last year's recession – in contrast to the slow return to growth following the last downturn – proves that it is now widely seen as an essential tool for business growth.

In 2022, AA/Warc is predicting total adspend growth of 7.7% year on year, taking the UK ad market to £29.9bn, although some sectors will slip back into decline, including direct mail, regional newsbrands and magazines. Cinema will again enjoy the fastest growth of 50.7%, followed by out of home.

James McDonald, head of data content at Warc, added: “Seventy pence in every £1 spent on UK advertising is invested in digital formats, a rate which accelerated greatly last year and is now surpassed only by China.

"It is these formats that will lead absolute growth over the coming terms and none more so than paid search, which is seen to be benefitting from burgeoning ecommerce trade.

“Our forecast update since April is demonstrative of the current strength of this sector in particular, though it is notable that online formats across the board are set to see growth after a tumultuous 2020.

"That the ad market will generate more value this year than before the crisis is testament most to its role within the lives of the connected consumer.”

Marketing budgets on the up for first time in 18 months, IPA says

How brands can find strength through consumer unity amid disunity