Rick Hirst, the UK chief executive of Mcgarrybowen, gives his take on the newspaper's first issue as a Johnston Press product.

It’s a New Day. Oh no it’s not – it’s the first issue of i published under its new owner Johnston Press. It’s likely that seasoned readers of the national newspaper, formerly a stablemate of The Independent, will notice little change in their daily read. 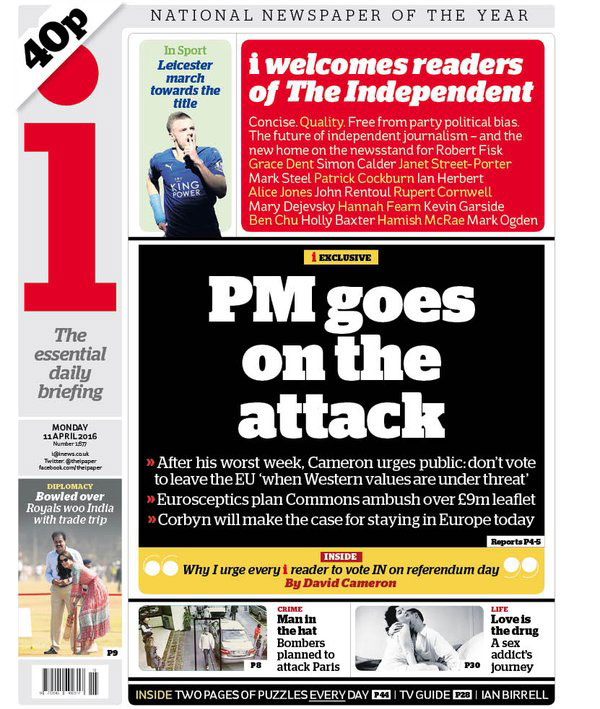 Aside from a message on the front, welcoming readers of the now defunct Independent that also puffs its roster of familiar columnists, not much has changed in either the newspaper’s format or the types of stories that it wants to cover.

Continuing a theme that started last week and continued throughout it, the splash is about David Cameron and the aftermath of his exotic – if entirely legal – tax arrangements.

Cameron is indulged with his own column urging i readers to vote ‘in’ on referendum day – maybe a slight change on the scrutiny which its previous owners, the Lebedevs, whose fortune came from even more obscure sources, put him under.

In fact, with its famous news matrix and the rest of the newspaper continuing with the bite-size and snackable stories that its previous owners introduced, the promise of the Johnston Press chief executive Ashley Highfield that readers won’t notice any change under its new stewardship seems to be borne out. Indeed the editor Oliver Duff, who transitioned to its new owner along with many of its columnists, refers to this in his leader stating "Notice much different about today’s edition? No? Good. See you tomorrow."

So i seems to be very much a case of business as usual and if Johnston Press has got dramatic plans for the title then it hasn’t implemented them yet – certainly there’s none of the frothy feel-good lifestyle nonsense eschewed by its rather sickly Trinity Mirror rival. As the self-styled ‘essential daily briefing’, i is likely to continue to appeal to its 269,000-strong audience of time-poor readers who are willing to fork out 40p (the cover price remains unchanged) rather than pick up a copy of the more low-brow Metro.

While i’s circulation has been heading downwards, Johnston Press’s distribution means that it will now have national presence and Highfield is optimistic that this, as well as its plea to readers of the now defunct Independent, will reverse the decline. It also should make the title more attractive to national advertisers, as well as helping Johnston Press cross-sell across its stable of regional newspapers. But bafflingly the paper’s new website – inews.co.uk – seems not to work.

Having paid £24 million to buy the title, Highfield has been careful with his investment. It may be a new day for the i but it hardly seems to be a new dawn.

The Independent: tribute to newspaper's print edition after 30 years

Johnston Press boss Highfield: i can win ad revenues from Times and Telegraph