Whether you prefer the Glorious Games or the Friendly Games, the first stage of London 2012 has passed in style, and some in the British media have played a blinder. Media Week recognises those who have had a particularly good Olympics.

Television has the world captivated

From the outset, when 26.9m people tuned into old fashioned linear television for Danny Boyle’s bonkers Opening Ceremony, through to the 26.3m who watched the closing finale, TV has been in a league of its own during these Games.

In fact, London 2012 takes the crown as the biggest event ever televised in Britain, with 51.9m viewers – some 90% of the adult population – watching for at least 15 minutes.

Despite being on the Beeb, Tess Alps, executive chairman of commercial body Thinkbox, was quick to recognise its significance: "We didn’t need the Olympics to prove that people love TV, and that it’s the biggest and most influential medium in people’s lives, but anything that reinforces these facts is welcome."

Globally, TV dominated too, with NBC declaring it the most-watched TV event in US history, attracting a staggering 219m people.

Admittedly our commercial broadcasters are unable to report anything like the $1.1bn additional ad revenues the Games generated for the US broadcaster, although apparently this still only means the NBC team broke even.

The extensive and unparalleled access provided across the BBC's portfolio, including a coming of age for its interactive Red Button service, has only served to remind us why we all love Auntie so much.

The Olympics did offer tangible commercial lifts elsewhere. Perhaps most striking of all has been the boost reported by the embattled press sector. 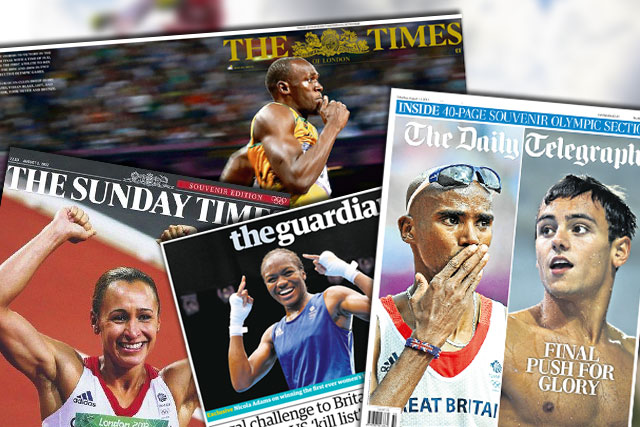 Newspapers had a really good Olympics

London 2012 helped remind us of the power of print, and that sometimes you just can’t beat photography and analysis you can pick-up, cut-out, stick-up and keep.

And it’s not just whimsy, commercially newspapers – especially the qualities - have enjoyed lifts in both copy sales and ad revenues thanks to the Olympics. Most notable has been the success of The Times and Sunday Times.

Both papers, we shouldn’t forget, fell victim to circumstance when parent News International lost its exclusive multi-million pound deal with IOC sponsor Visa following the collapse of News of the World last year.

However, led by its strong sports desk, The Times added around 100,000 copy sales the day after the opening ceremony, and has also enjoyed commercial coverwraps throughout.

The Sunday Times led the rest of the Sundays in benefitting from two bumper Saturdays at the Games, lifting weekly sales by around 70,000 copies.

Dominic Carter, commercial director of News International, notes that in addition to the wraps and display ads, The Times has also enjoyed a strong surge in "late money" from advertisers. However, the commercial leader does temper any Olympic boost with recognition that despite rising month on month, the additional spend has not resulted in any year on year growth.

Elsewhere, The Guardian is reporting about 20,000 additional daily sales, while The Observer’s sales rose by 15,000 the opening weekend and a further 15,000 the following week after Mo Farah and Jessica Ennis’ performance on ‘Super Saturday’.

The Daily and Sunday Telegraph have also had a good Games, with the daily 48 page Olympic supplement contributing to more than 280,000 additional copy sales over the duration.
The publisher claims 70,000 copies have been sold through its Olympic street selling initiative.

In terms of ad sales, the Telegraph team is reticent to only talk of spend during the Games, noting they have been executing campaigns for an unrivalled nine Olympic sponsors (BA, BP, BT, Cisco, Deloitte, Omega, Lloyds, P&G and Thomas Cook), the first of which joined back in November 2009.

Another notable print winner has been the free-title Metro, which attracted around £12m in Olympic spend ground out through ads from 24 sponsors and coverwraps for Adidas. 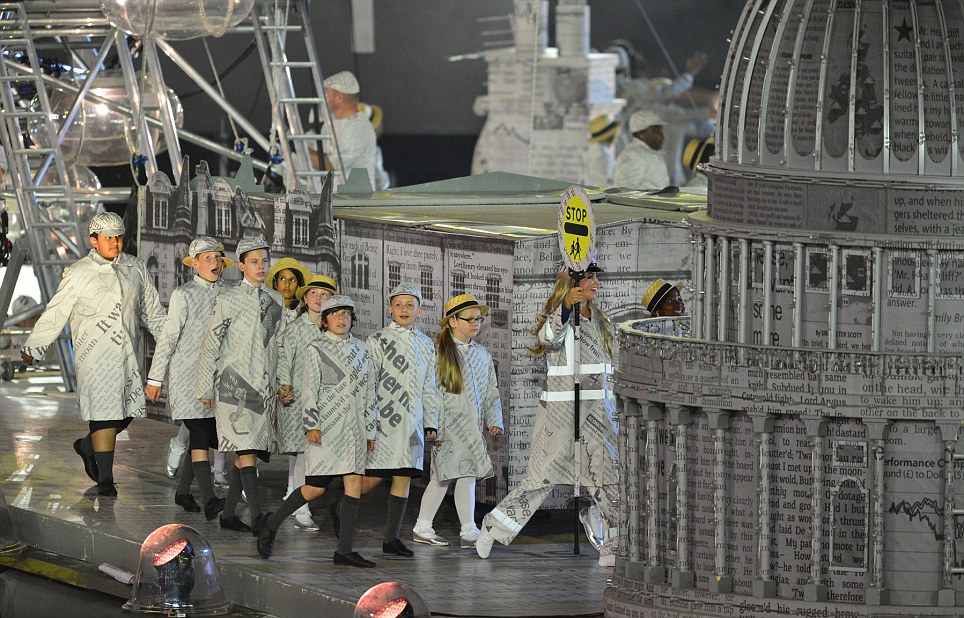 The significance of the British press during the Games was even acknowledged in Kim Gavin’s Closing Ceremony, in which performers in newspaper suits walked around iconic London landmarks draped in giant newsprint.

Pointing to the knowledge and expertise that resides within editorial teams, Olins said the Games has served to underline the "exceptional ability for newspapers to provide context and perspective to significant national events and moments in time".

Online, Olympics breaking news, video and infographics have helped lift most newspaper sites during the silly season, with Guardian.co.uk leading the charge with an additional 2.4m average daily page impressions.

Outdoor, meanwhile, has enjoyed having the eyes of the world to play to. Despite the Olympic sites being "clean" from advertising, anyone lucky enough to attend any of the events will have been roused by a well crafted outdoor execution en route.

Whether it was Bolt illustrated buses telling us to "Flow faster with Visa", BMW posters reminding us "Joy is Instantaneous", or Lloyds TSB’s animated wrap of the entire Stratford station, the executions made us feel part of the most important event in the world [see gallery above].

Outdoor revenues grew 9.9% to £229m in the second quarter of 2012, led by mostly Olympic sponsors, including Glaxosmithkline, Coca Cola, Samsung and McDonald’s.

This current quarter is expected to be "even bigger", with the Outdoor Media Centre reporting one fifth of all sites in London taken over by sponsors, partners and other sports related brands.

Mike Baker, chief executive of OMC, believes Olympic-fuelled growth in Q3 could reach as much as 20-25%. "The visual aspect of branding is such an important part for those wanting to associate themselves with any major event," he says. "This could be a record quarter for UK’s outdoor."

Of course London 2012 was also billed as the first ‘Social Olympics’, and Twitter has certainly played a key role in capturing the public mood and providing rare insights into the lives of the athletes themselves.

There has been more than 150 million Tweets about the Olympics, and the micro-blogging service has provided the social glue during key Games moments ever since Boyle’s wondrous opener. But any talk of it replacing traditional news services has proved unfounded.

Twitter’s place among today’s media mix is finally coming to be understood. It does not compete or vie with other media, but rather helps complement and promote them.

Sure, it has the ability to set the news agenda, with quotes from the platform now regularly forming the basis of print, online and broadcast news stories in themselves, but it does not supplant the additional, more detailed story.

This view is echoed by Twitter’s UK sales director, Bruce Daisley, who says: "We find Twitter enhances and complements other media. Nothing could replace the incredible TV experiences of the last two weeks - but people can feel closer to these experiences with social media.

Facebook meanwhile has undoubtedly enjoyed record numbers of comments and photos shared around the Olympics, and will be hoping to convert increased dwell time into commercial success, although those in the media will not be surprised to learn figures were not forthcoming at the time of publication.

The athletes themselves have enjoyed strong fan growth during the Games too, led by Michael Phelps adding 747,000 fans, Usain Bolt gaining 694,000 and our own Jessica Ennis rising by 621,000. 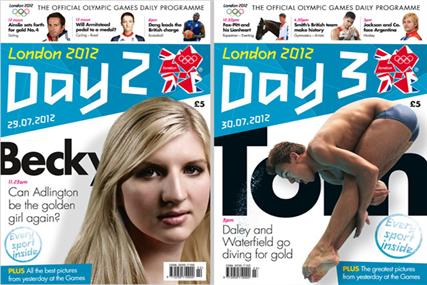 When it comes to media and London 2012, credit must also go to customer publisher Haymarket Network, sibling to Brand Republic Group, which as the supplier of the official Olympics programmes and magazines has produced 27 daily guides and more than 4,000 pages for the event.

In total, including the Paralympics, 59 publications will be produced for Locog, culminating with the official London 2012 Olympic Games Review, available in retail outlets after the Games finish.

Andrew Taplin, managing director of Haymarket Network, says: "It is proving a real honour to be working with Locog at the very heart of London 2012, telling amazing stories to bring to life the Games and its heroic participants."

Channel 4 set to capitalise on Paralympics 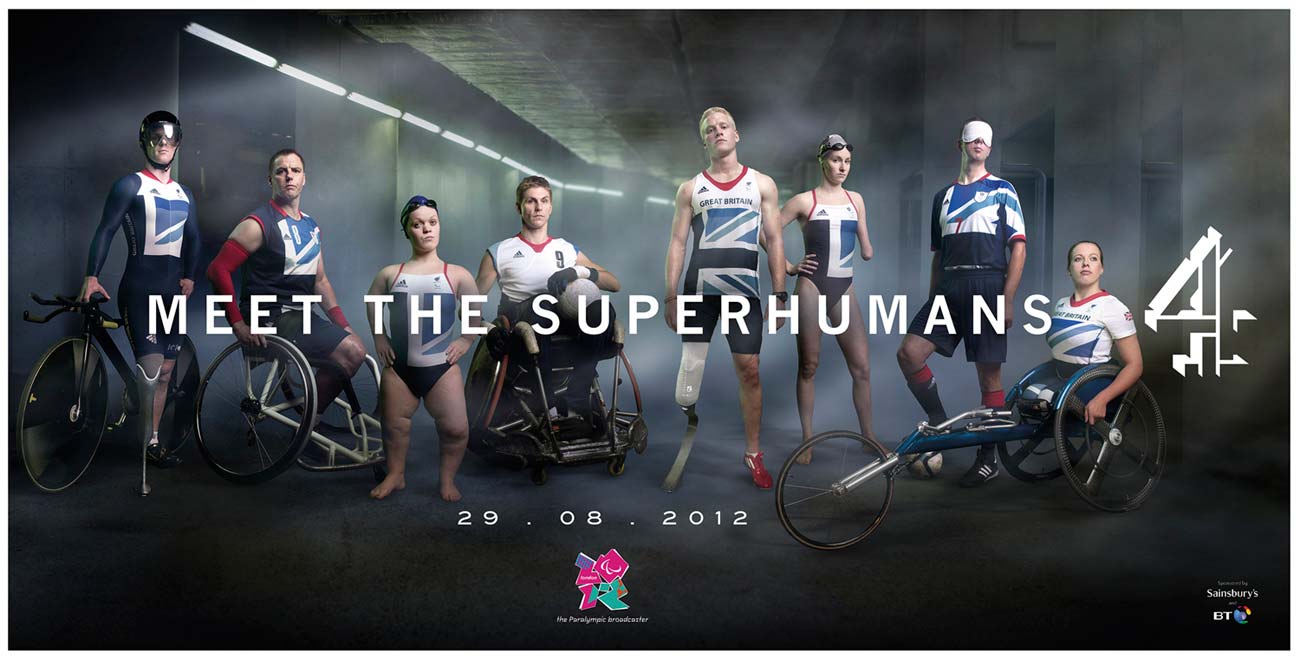 The spirit of the Olympics is set to continue as we gear up for the Paralympics from 29 August. More than 2.1m tickets have been sold for what promises to be the biggest Paralympics to date.

This time you can expect TV ads to take centre stage, as Channel 4 hosts its biggest broadcast in its 30 year history. A high bar has been set by the BBC’s 2,500 hours of live footage, but C4’s sales director Jonathan Allan views the event as nothing short of "brand defining" for the aspirational broadcaster.

He says nearly 60 brand packages around the Paralympics have been sold, and 50% of those are to brands which aren’t associated with the games.

News that David Abraham’s team has secured the services of BBC’s multi-talented Clare Balding to sit alongside former Olympic triple-jump champion Jonathan Edwards, ex-Paralympic swimmer Rachael Latham and wheelchair basketball player Jordan Jarrett-Bryan among others, should be viewed as a statement of intent.

If any event can showcase Channel 4's primary purpose, as defined in the 2003 Communications Act, to provide a "broad range of high quality and diverse programming… that appeals to the tastes and interests of a culturally diverse society and… exhibits a distinctive character", then surely it is the London Paralympics 2012.

Disagree with any of above, or have your own success story of the Games, tell us about it in comments below.