We are heading to a future where alternatives to our established norms will flourish, Marketing columnist Tracey Follows says, but we need to stop seeing it as a threat.

Last weekend innovation charity Nesta put on a formidable Futurefest which, as the name suggests, curated and debated the hot topics obsessing anyone interested in the future. People of all disciplines and political persuasions met and discussed the future of work, the future of money, the future of democracy, and the future of thrills!

My epiphany during the presentations, sensory experiences and debates, was the realization about just how much we are now prepared to not only consider the ‘alternative’ but to take practical steps to ensure alternatives can exist

And it was a thrill to immerse oneself in the opinions, perspectives and technologies that will guide us across the new frontiers and into a new era. There are new frontiers opening up everywhere. We might be used to hearing about the rise of the machines and how they will replace middle class jobs but Anna Dumitriu, who spends much of her time at a secret robot house in surburbia, introduced us to robot companions who can care for the elderly, dispensing more appropriate care and compassion than a time-poor or badly trained human could ever manage.

The theme of time being our most precious commodity, came through again and again. The fact that we are going to be prepared to give up some things we used to value in the 20th century in favour of other things that deliver us more time -  or a better time - became the premise of many of the forecasts about how, as humans, we will behave and what we will really need and want in the future.

But what we seemed to be wanting and in need of now is an alternative. My epiphany during the presentations, sensory experiences and debates, was the realization about just how much we are now prepared to not only consider the ‘alternative’ but to take practical steps to ensure alternatives can exist. 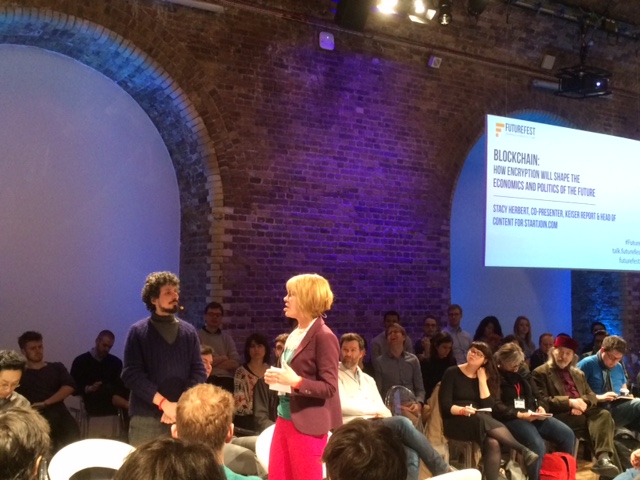 The alternative to banking

What is happening in the area of money makes the point. For many years we have accepted the banking system as a fundamental system that will always exist in a similar way to the way it always has. Since 1694 the central bank has kept its ledger (or register) of all the banks’ activities, and those banks have kept a ledger or register of what goes in and out of every account in every one of those banks. It is a huge system that one can't really contemplate doing without -  until an alternative comes along.

We've had alternative payment processes (from PayPal to peer2peer) but we haven't really had an alternative system. Until Bitcoin and blockchains appeared on the scene that is. Now suddenly we have the possibility of a decentralised database - a decentralised register - of each and every transaction, and one that isn't run by any individual, organization or authority specifically but is run by the people involved. As John Lanchester eloquently stated: "it is the first register to exist that doesn't need the state or coinage featuring the sovereign image". What he is getting at is that this system of trusted, transparent, continuous and unadulterated coded currency, is the first proper alternative to having to use an intermediary, otherwise known as a Bank.

Alternative to the authority

The session with Edward Snowdon bought the whole idea of an ‘alternative to the authority’ into sharp relief. This is a man who has sacrificed everything to bring into the public domain a dossier of information about how the system really works, whilst at the same time experiencing that same system stopping it from becoming public. He talked about how many of his colleagues, like himself, were queasy about what they saw going on at the National Security Agency but also how they were not prepared to speak out against the system, for fear of retribution.

Many of his colleagues, like himself, were queasy about what they saw going on at the National Security Agency but also how they were not prepared to speak out against the system, for fear of retribution

He argued persuasively that the mass surveillance system that we now endure is not even a system that works. The bulk collection of data (where the NSA, GCHQ and a whole web of security services connected to each other, routinely collect all of our internet traffic and content) is arranged in a ubiquitous, non targeted fashion. Its aim is to collect all data just in case someone does something in the future. Bulk collection of data, he argues, has never once prevented a single terrorist act. What it has done is give access to those running the system, huge amounts of information about activists, trade unions, and other indivduals deemed to be rebellious. So we have ended up with surveillance that is a spying system, not a public safety system. He proposed an alternative system of 'targeted surveillance' in which people under suspicion are put under surveillance and the processes made more public. He insists that all he wanted from the information he made public was the possibility of the public deciding for themselves what kind of system they want. 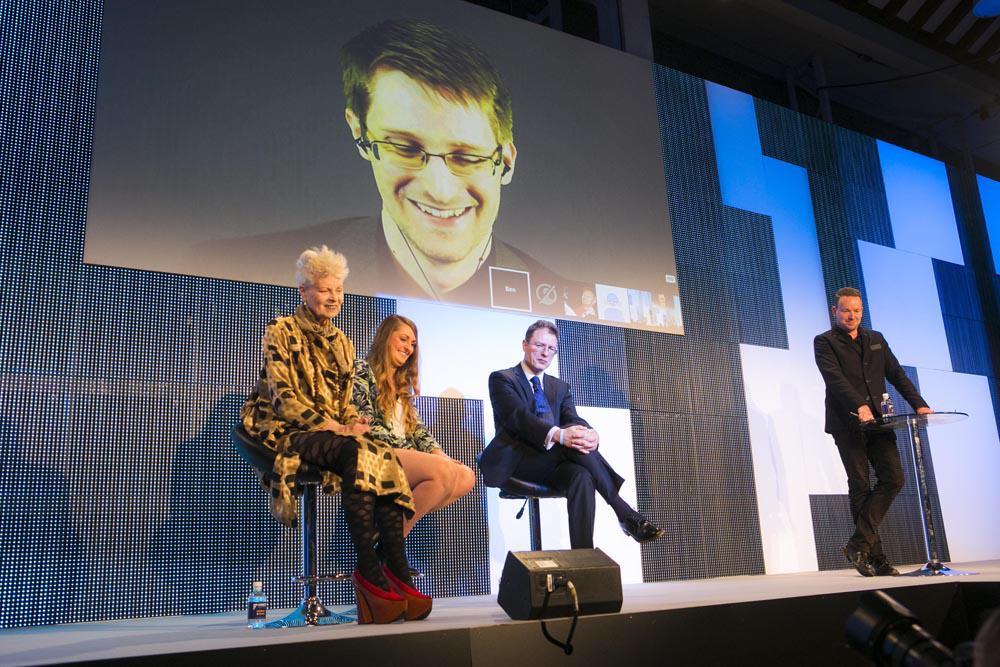 So John Lanchester had explained alternative finance and now Snowdon proposed alternative surveillance and it occurred to me that this was the emerging theme  - or meme  - of the conference: Alternatives. In fact one speaker had gone the whole hog and set up an alternative country. The musician, Matthew Herbert, delighted the crowd with his story of how he set up Country X; a virtual country where there are no borders, no limits on immigration or emigration, and where everyone and anyone is welcome (apart, it would seem, from anyone in advertising).

What was becoming clear was that the incumbent system is not the best possible of all possible worlds, it's not even necessarily a better one, it's just the incumbent one, the one we got stuck with a while ago and can't imagine being without

When the conference began, the questions and debates seemed to have an underlying mood of fear and threat. 'Will machines take all our jobs'? 'Will social media compromise our identity? Is the future only for the elite? But by the end of the final day, the tone had become much more optimistic as people seemed to work through the explanations and ramifications of all kinds of alternatives. Because what was becoming clear was that the incumbent system is not the best possible of all possible worlds, it's not even necessarily a better one, it's just the incumbent one, the one we got stuck with a while ago and can't imagine being without. But as soon as people do start to imagine alternatives and hear how to turn those imaginary ideas into practical change, the world seems a brighter more hopeful place.

As I listened to the debates, experimented with the robots, immersed myself in the thrills and sensory technologies, I couldn't help but feel that I was lucky to be part of a this generation. A generation defined not by demographics but by psychographics. The first generation for a long time that can create a new alternative to the systems that we have been operating under, and within, for the last three hundred or so years. I call us Generation-Alt

Ije Nwokorie, CEO of Wolf Olins shared the story of John Henry, a steel driver who stood up to the steam drill for fear of the automated world stealing his job. The talk was about the emergence of and unlocking of creative potential in an increasingly automated world but what struck me was that John Henry took his position because he wasn’t aware of an alternative, better, system. He could only see the system he was already in and thought he needed to fight to preserve it.

I think something big is going on. It is time to stop feeling threatened by the future of ‘automation’ because what is actually happening is that we are escaping from an automated system that we didn’t realize we were even in. It's the automated systems of the past that we've been trapped in that we should be fearing. Like a hostage suffering Stockholm syndrome it's hard to walk away

from the systems that have not only become familiar to us, that we have grown up within,  and that we can't imagine life without. But as soon as we do imagine life without those incumbent systems we can start to seriously consider the alternative; and in fact realise them.

This generation is Generation-Alt. The generation that can for the first time, with technology in their own hands, put a new systems of banking, of governance, of business ethics, and even of politics in the hands of the many and not the few. Generation-Alt has a chance to do the last of those things in May in the general election. Will Gen-Alt break the political system apart and usher in a new alternative? Maybe not quite yet but its certainly on the horizon. It doesn’t matter what you do, where you work, or what category you’re in or brand you work with, the old system you are in is on the brink of collapse, so you better start asking yourself: what is the alternative?

The future of power: how technology will influence authority

Why content strategies should focus on Tesco not Tumblr

The future of drugs: building a super-smart society

Meet Marketing's 'Thinkers': inspiration and ideas from our strategic brains