This self-motivated, entrepreneurial marketer is making his way up the ladder at Standard Life, notching up four promotions in as many years.

In that time, website hits have rocketed from 200,000 visits a month to 500,000, and Paris now oversees a seven-figure marketing budget and team of 10.

What sets him apart from his peers is the fact that he brings fresh thinking to the financial-services stalwart, not only coming up with ideas, but also driving them through with a strong will and determination. 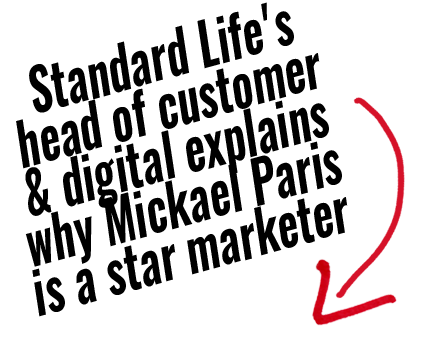 With experience at price-comparison site Skyscanner and a web-optimisation agency under his belt, he "thinks in digital" – but his challenge is that the majority of his colleagues still "think in analogue", so he’s on a mission to educate and empower them. "You need to be patient, but forceful at the same time," he says.

"Standard Life is so big, and most people come from the old world and don’t understand digital. Some even think we don’t need it. I try to show them that they had better be on board or they’ll be left on the side."

His main advice to marketers trying to reach younger consumers is to "forget everything you thought you knew and start again".

Standard Life is so big, and most people come from the old world and don’t understand digital. Some even think we don’t need it. I try to show them that they had better be on board or they’ll be left on the side."

When the digital team proposed enabling the purchase of products like ISAs via an app, for example, there was much initial resistance internally to the idea, with many convinced that consumers would never transact in this way. "But guess what?

We soft-launched and in the first week 10% of customers who had downloaded it used the app to top up their Stocks and Shares ISA," he says. Despite the fact that he clearly thrives on creative new ideas and innovation, Paris says that when it comes to his job, at heart he’s a scientist.

"I would love to say I’m an artist, but I’m a bit of a data geek. Data has to drive your creativity because other­wise it becomes too sub­jective," he adds.

Nevertheless, he does admit to trying to persuade his colleagues to back the occasional "crazy" idea and will take a punt and potentially make a mistake, noting: "Some things didn’t really work, but overall, there’s been more positive than negative."

He’s already had a stab at creating his own business – an online translation service – and wants to do it again one day.

For now, however, he’s happy scaling Standard Life’s ranks. "I know it sounds a bit ‘vanilla’, but I don’t feel like it’s work, because it’s my passion."

Mickael is always pushing us forward. He never rests on his laurels and never gives us peace. He’s ambitious in a very positive way.

What makes him a cut above is that he is able to turn his knowledge into a vision and inspire people. He comes across as really together, calm and considered, but under that, I know there’s a lot of bubbling energy.

There’s no doubt that his infectious passion for all things digital is helping Standard Life transform into the progressive and innovative business it wants to be.

If there’s a better digital marketer out there, I’ve not met them. Mickael is a star."

Be a one-hit wonder: 5 things I wish I'd learned earlier in my career

Six reasons why I chose to become a marketer